What happens when a downtown church with an active program of community outreach asks how it might better meet the needs of its changing neighborhood?

Believing our role as faith leaders includes encouraging incarnational experiences of faith connecting one’s active civic life to their experience of worship, members of St. Paul’s Episcopal Church, asked, “what are our next steps for being a better neighbor and helping to build a better community downtown?”

Located in downtown Richmond, Virginia, and adjacent to the state Capitol, St. Paul’s has a rich history as a “weekday church,” offering daily worship, educational and lunch programs, and daytime spiritual formation opportunities for people living and working downtown as well as a number of ongoing outreach ministries. As downtown Richmond began to experience a resurgence as both a residential and business/civic community, we started to explore ways the church might contribute to this rebirth.

We began to look outward. A committee was tasked with giving this idea shape and form. Conversations were held; visits were made to churches in other cities. Downtown Mission began to take shape as a sacramental ministry with the goal of knocking on new doors, entering new relationships, and developing innovative opportunities to grow and deepen our life and ministry together. A conversation between our rector, Wallace Adams-Riley and Ben Campbell, pastoral director of Richmond Hill planted the seed of hiring a priest as missioner, dedicated to building connections between St. Paul’s and its Richmond neighbors. “He had this idea of calling someone totally dedicated to reaching out in fresh ways,” said Adams-Riley. “Knocking on doors we hadn’t already knocked on. Approaching people not thinking about church at all or who had stopped thinking about church, to help them think about church in a new way, to help them understand what church, what the Gospel, what Jesus means to them.”

A staff salary and program budget were allotted. Downtown Mission was born.

Led by downtown missioner Melanie Mullen and a small leadership committee, Downtown Mission is building connections between the congregation and people living and working downtown, providing new ways to practice radical welcome and to praise God through action. We've been reaching out in new ways to people living and working downtown, and at the same time, fostering new community relationships.

A key part of this ministry is how it focuses members’ attention towards the community. It’s not about increasing membership or raising funds or getting a better bottom line. It’s about how St. Paul’s becomes a better neighbor and helps build a vision, to help us get outside the walls of St. Paul’s.

There are now more conversations going on about what's going on in our community and how we can be involved, though participation has often come slowly. As members practice what Mullen calls “the art of neighboring,” engaging with residents, supporting local businesses, aiding efforts to improve life in the city, they are both spreading the church’s ethos in a way that benefits the broader downtown area and deepening their own engagement with the downtown community and their faith.

Being a Good Neighbor

When Mullen asked Victoria Campbell, Richmond’s community garden coordinator, how St. Paul’s might help, Campbell seemed surprised but excited that a church was interested in such a thing! What began as an offer to help with weeding and watering, led to the development of a community garden in the heart of the Shockoe district, behind the Main Street train station in Downtown Richmond. Later, the congregation developed a ‘daughter’ garden in Creighton Court – an underserved community in Richmond’s East End.

During Lent, we practiced public liturgy, offering Stations of the Cross at the 17th Street Farmers Market space downtown. We also created a mobile “listening post” for prayers, an idea we learned about from the Yale Congregations Project and theologian Don Sailers. The post offers passers by the chance to post a prayer on a board, which St. Paul’s then adds to its prayers and petitions on Sundays.

We’ve also offered a Financial Peace class in the evenings at St. Paul’s, which brought in a number of nonmembers. We sent parishioners to local TEDx and other development forums in the city. We participated in Richmond’s iteration of Parking Day, a worldwide event where artists, designers and citizens transform metered parking spots into small temporary public parks. We held a community Eucharist with a handful of other churches at Virginia Pride Day, and hosted a welcome booth at the festival, offering yet another opportunity to practice radical welcome.

The 2013 program year kicked off with a rousing and festive celebration on Grace Street sponsored by Downtown Mission. We called it a “Welcome Block Party,” and envisioned it as a chance for the parish to come out onto the street in fellowship with one another, inviting the community to join in the fun. The party included food trucks and live music from a local favorite brass band.

Future plans include installing a mobile labyrinth in different locations in the city, inviting the community to come and walk, meditate and pray.

The ministry has been met with some challenges – to some extent motivated by the looming fear of church decline, with pressure on the missioner position to generate new membership. Committee members and church leaders have had differing opinions on what the ministry’s main goals should be. We are now working to resolve those differences and clarify goals and mission.

Another challenge is that we’re dealing with modern people who are interested and passionate, but who are also very busy and have lots of commitments. Furthermore, we’re a downtown church – and the majority of our established membership lives elsewhere, so we have some location challenges.

For churches considering a program like this, the most important thing is to be very clear about your goals and mission, and knowing what's valuable and what's worth protecting. The experimental, fluid nature of the program means that holding fast to the core mission is important.

Melanie Mullen came to St. Paul’s Episcopal Church in Richmond, Virginia in 2012. Melanie has a Masters in Divinity at Virginia Theological Seminary, and most recently, she served as Interim Diocesan Youth Missioner for the Episcopal Diocese of Washington, DC. Along with a wealth of varied experience, Melanie brings with her an entrepreneurial and pioneering spirit, as well as a deep and contagious commitment to the spiritual exploration and development of all.

Brian Levey is a data scientist working in the defense industry. As an active parishioner, he offers a great deal to St. Paul’s: he is part of the vestry, parish choir, Membership Engagement Taskforce, and many more committees. He served on the Downtown Mission search committee, and now contributes much of his time and talent to Downtown Mission committee. 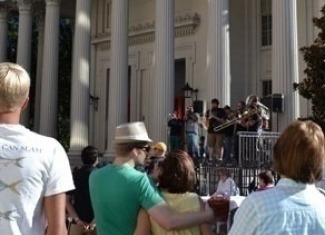