Tillamook, Oregon has many similarities to other small cities across the United States. There’s a strong sense of community. Neighbors come together to support each other and to volunteer in the community’s many social service programs. The community supports a number of churches and other faith traditions with several working together in service to God’s mission as the Tillamook Ecumenical Community.

For eight or more years, four Protestant Church members of the Tillamook Ecumenical Community, St. Alban’s Episcopal Church, St. John’s United Church of Christ, St. Peter Lutheran Church, and the Tillamook United Methodist Church, have also gathered for shared worship. Their practice of celebrating Fifth Sundays by worshipping and breaking bread together has strengthened the bonds between the congregations and laid the ground for not only working collaboratively in mission but also for three of these congregations to hire the same clergyperson as their pastor or priest-in-charge.

These congregations – known locally as the Four Churches – have experienced the same decline in attendance and drop in income as other churches across the United States. As the congregations grew smaller, their leaders talked about what the future would bring and ways they might work together beyond the shared Fifth Sunday worship and their collective service to the community through the Tillamook Ecumenical Community.

As they recognized their smaller congregations were no longer able to adequately support their individual ministries, members of the Four Churches began to ‘show up’ in support of each other's programs: Preparing and serving food at St. Alban’s Monday night free supper that feeds over 100 people each week. Packing sack lunches during the summer for the Grub Club program, which provides over 6,000 sack lunches to local children. Volunteering at the food pantry located at the Methodist Church as well as helping out at programs sponsored by one of the Four Churches. Working together, they organize and provide meals and housing to support community events such as the 4K Run for Cancer, the Army National Guard Concert Band performances, and international students attending a local marching band camp.

Four years ago, as a result of illness among the clergy, parish vacancies, and diminishing numbers in each congregation, conversations among the church leaders culminated in the creation of a full time clergy position, shared by three congregations representing three different Christian denominations. Jerry Jefferies, the part time pastor at St. Peter Lutheran Church was invited to also serve part time as pastor of Tillamook United Methodist Church (with the assistance of deacon Carol Brown) and as priest-in-charge at St. Alban’s Episcopal Church. Meanwhile, St. John’s UCC chose John Sandusky, a faculty member and licensed minister working at the local community college, as its own part time minister.

This somewhat unusual position was possible because The Evangelical Lutheran Church in America has full communion agreements with The Episcopal Church, the United Methodist Church, and the United Church of Christ. And, it was also possible because the congregations knew Jefferies from his years as part-time pastor at St. Peter and they were willing to give it a try.

Key to the success of this shared clergy position was a commitment to maintain distinct denominational identities. Having worshipped at each other’s churches during their shared 5th Sunday services, as well as shared lessons and carols and Easter services, members were familiar with how their liturgies and practices were similar and where they differed. Episcopalians and Lutherans celebrate the Eucharist, the Methodists and members of the United Church of Christ, Communion. Some denominations use wine, others grape juice. The books in the pews are different and there are variations in when people stand, sit, or kneel.

During the offering, givers have the option of designating which church their gift goes to. Undesignated funds support the ministries of the Tillamook Ecumenical Community.

“While most members of the Four Churches welcome our close involvement, not everyone is comfortable with change,” says Jefferies. Some people have found this transition difficult. There are members who choose not to participate in the Fifth Sunday worship. “We keep loving them and recognize their feelings of hurt,” continues Jefferies. “From the beginning we pledged to maintain each congregation’s worship style and identity, the things that made them unique.”

Smaller congregations, smaller budgets, and shared clergy also means changing the way work gets done in a congregation. It takes time for a once larger church to shift from the way things were done when they were bigger to a new way of operating that fits better with their now smaller size. Vestry and council members have needed to take on additional responsibilities, including making arrangements for Sunday worship when Jefferies is serving one of the other congregations. Sometimes this is a simple, lay led prayer service or discussion. Other times, a retired pastor leads Sunday worship.

Together, they write a quarterly newsletter, with each church having its own page. Recently they completed a four-church pictorial directory. There has been talk of joint Bible study, and perhaps a series of classes to learn more about each other’s faith traditions. But, these are small congregations, and sometimes good ideas take time to grow into programs.

That They May All Be One

For Jefferies, serving congregations of three different Christian denominations has been transformational. “It has brought to life our shared faith tradition as worshippers of Jesus Christ. Now, every time I study or read Scripture or prepare a sermon, everything screams ‘unity’ and what we share in common. Think about Pentecost when people of all tongues were able to understand one another. Or, Jesus, praying for his disciples in John 17:10-11.” (NRSV):

“All mine are yours, and yours are mine; and I have been glorified in them. And now I am no longer in the world, but they are in the world, and I am coming to you. Holy Father, protect them in your name that you have given me, so that they may be one, as we are one.”

On December 30, 2012, the Four Churches in Tillamook were the recipient of The Episcopal Diocese of Oregon’s first Distinction in Ecumenical and Interfaith Award. Carolynne Fairweather, David Mitchell, and Cynthia Reynolds from the Diocesan Ecumenical and Interfaith Commission presented the award, a beautiful processional banner, during a joint service of Lessons and Carols, in which the combined choirs of the four churches led the congregation in singing. While making the presentation, Fairweather noted, “This venture has energized each church. It is an excellent example of ecumenism and faith in action.”

How does your congregation deal with change? Who Moved My Cheese by Spencer Johnson is a story that reflects common behaviors when it comes to change. With your vestry, watch Who Moved My Cheese (the movie) and reflect on your responses to change: Can you read the handwriting on the wall? How would you rate your ability to anticipate change? How well do you adapt to change? Do you see change as an adventure or a threat? How prepared do you feel for things continuing to change?

Nancy Davidge is an associate program director at the Episcopal Church Foundation and editor of ECF Vital Practices. This article is based on conversations with Jerry Jefferies, priest-in-charge at St. Alban’s Episcopal Church and pastor for St. Peter Lutheran Church and the Tillamook United Methodist Church, in Tillamook, Oregon. Carolynne Fairweather is an Episcopal deacon and member of the Diocese of Oregon’s Ecumenical and Interfaith Commission. If you have questions, please contact Jerry an email at pastor.of.3@gmail.com. 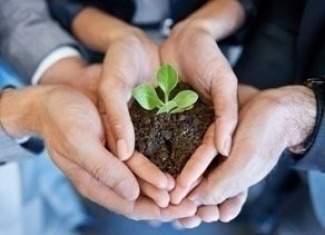