May 2017
Evangelism and Discipleship

Father Antonio Rojas, better known as Father Tony, is a legend among the people he serves. Since 1998 he has been traveling to the farms of marginalized migrant workers to take the Mass directly to the farmers. The idea behind his ministry was initiated by a woman who took clothes to the farmers. She identified the need and communicated it to father Tony, who was the missionary for that population but wasn’t initially on-site at the farms. I became aware of the program through my Episcopal Church, and soon realized that there was an unfulfilled need to address this particular Latino population within the city of Durham. I started helping out however I could and when the job of Program Coordinator for the ministry was announced I thought I may want to try it out for a year. Years later, here I am, still helping the community.

There are different kinds of farm workers. Due to the fact that only 12% of them have work visas, they’re frequently taken advantage of by the contractors with impunity. It’s a situation worsened by the fact that they are forced to remain on the farms. 50 - 70% of the workers are undocumented and go from state to state looking for work. These families work for whatever they’re given. The work is exhausting. They rent homes in deplorable conditions and live in extreme poverty, having no contact with their surrounding communities. Sometimes, because they have no knowledge of the United States, they have nothing to eat and are afraid to leave the farms in search of food.

We will not be able to solve the problem of farm workers in America by saying that only the “documented” are free to work because it wouldn’t address the problems of the undocumented workers; instead those without documentation would be left jobless. Undocumented domestic workers are in a similar predicament; they’re not paid fair salaries and if they voice their complaints they’re threatened or simply fired.

The undocumented are very hard working people and they know how to work with their hands. If farm work is unavailable, they can find domestic work as painters and landscapers, but because they don’t understand the US legal system they tend to live in complete isolation and can never get ahead. However, we have found that those who are given opportunities to learn English begin to integrate and eventually prosper and succeed.

The people we serve have almost nothing and need basic things, like food, so that is mostly what we give them—an irony for those who sow the fields and pick the crops. We also try to teach them that they should not be afraid of their surroundings, however the fear that they can be removed or deported at any time is very real. Since the recent presidential election we have seen a rise in their fear. For instance, they now only go to the supermarket at night and stay under the cover of the farms during the day. People are afraid and think that there is no safe place. This is why our presence is so necessary.

We do not evangelize or undertake our discipleship as other churches do; instead we provide services as part of our social aid. Our clients only have Sundays free, so we have to be creative with our pastoral care. We educate them so they we can reduce their fear. The people we help tell others about our services. Our clients have no access to our web or Facebook pages so everything we do is communicated through word of mouth, which is why it is so necessary for us to be present on the farms, otherwise we would lose touch with our clients and they would stop using our services. We are in constant contact with other organizations so we can build a network and keep each other informed. We are now seeing that migrants who come back year after year know about our services, they visit us when they return and they tell others about what we do.

The sad truth is that farm workers are an invisible population. People think that crops are picked by machines and that organic fruits and vegetables grow in beautiful gardens. The reality is that the farmers are worked like machines, racing to manually fill their buckets. Consumers don’t know what is truly behind the fruits and vegetables they buy in stores. Human rights laws are continually broken and never strengthened.

We keep on helping and making people aware. We hold dialogue sessions with workers and monthly meals to ask them what they need most. I do not want to give them what I think they need. I remember that because tobacco workers tend to get very wet. They told us needed raincoats, so we gave them raincoats but they weren’t adequate. When they wore them they found that they were easily torn. When I asked them how they were doing they did not initially want to tell me that their raincoats weren’t holding up. However, as a result of our continued dialogue someone finally had the courage to speak up and when we listened to them they understood that they were part of a community and that collectively they can achieve much more than they can on their own.

Currently nobody knows exactly how American farms employ undocumented workers but we do know that they can employ anywhere from 8 to 100 laborers. When we have our annual festival we get about 3,000 people. Last year we continued our mission of delivering direct services, welfare aid, education, and pastoral care to close to 3,500 farm workers in the North Carolina counties of Johnson, Harnett and Sampson. We consider it our mission. As part of the Episcopal Church, we are committed to following the example of Jesus who served the poor, the needy, and the marginalized, and who not only taught them to fish, but also gave them fishes.

Juan Carabaña, Ph.D, is a native of Spain, a molecular biologist, and a longtime member and current senior warden of El Buen Pastor Episcopal Church, Durham, NC. He was as a researcher at Duke University Department of Immunology and at UNC Chapel Hill Department of Ophthalmology. In El Buen Pastor, he is a Latino Girl Scouts group co-director, youth director, and develops leadership and educational programs to strengthen the Latino community and improve their quality of life in Durham. He is married, has three children, and enjoys spending time with his family, the great outdoors, and playing soccer. 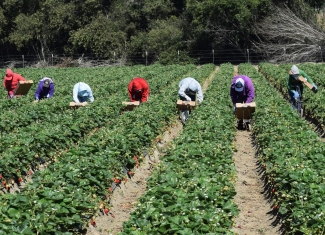