Editor’s Note:
In February of this year, a Rural Church Gathering was held in Mineola, Texas. Organized by the Rural Church Ministry Commission (RCMC) in the Diocese of Dallas, this annual gathering is an important time of learning and sharing new ideas. Rebecca Wellborn, Chair of the Commission, writes about the significance of this gathering and the difference it is making in rural church communities across Dallas.

It is easy for Episcopal rural churches to be overlooked in any diocese. A sacramental church in a rural community faces challenges that other churches may not face. How can the small Episcopal churches provide the sacraments without clergy? And how can small and rural churches afford to pay for clergy?

Rural churches are truly grassroots organizations that utilize the time, talent and treasure of the laity. There is tremendous opportunity for growth in rural areas. The number of un-Churched and under-Churched throughout this country, including rural areas, is the majority by far, and the Episcopal Church can reach out to them. The Diocese of Dallas recognized this potential with the formation of the Rural Church Ministry Commission (RCMC) to support the rural churches in their mission. Since 2007, the RCMC has gathered lay and clergy leaders of all rural churches in the diocese to “Share Ideas to Spread the Kingdom.” This gathering has always been held in the rural community, and every time the rural church leaders come together there are encouraging success stories and witness to the excitement they share.

The annual gathering of rural churches has always presented resources for a variety of ways to minister to the community. Every year the gathering introduces ideas that can be undertaken by the laity and implemented immediately. Presenters have addressed the issues of outreach, evangelism, youth groups (when there are so few youth), stewardship, church music, multi-generational Christian formation, communications techniques, and establishing an identity in the wider community.

At every gathering there is enthusiasm that results in a renewed vitality in the individual congregations, and the implementation of new programs inspired by the information shared during the day. Since the RCMC was formed there has been growth in the rural churches. Two churches have successfully completed major additions to their facilities. Partnerships between small rural churches and larger urban churches have been formed. At least one mission has become a parish. And, mostly, the rural churches have been recognized as an important part of the diocesan family.

A focus on community

The rural communities of the Diocese of Dallas are primarily populated by congregational churches. In some ways that demographic landscape makes it difficult for the Episcopal Church to “explain itself.” But it also offers a unique alternative to every other church in town. The un-churched of the rural community may be familiar with what a congregational service looks like. But they may not be going to church because they hunger for a sacrament they never knew existed. Rural Episcopalians have often heard visitors say they “found the missing piece” the first time they experienced Holy Communion. The challenges are how to introduce the sacrament to a non-sacramental population, and how to best use the resources of the laity in a sacramental church without full-time clergy.

The priority of the rural church is to teach the rich, historical, biblically-based faith and practice of the Episcopal Church, and to develop strong lay ministries and active fellowship. Rural churches must mold the ministry to the community – it is vital for them to be an active part of their community. As a former diocesan bishop once told a new rural church priest, “Your congregation is this entire town, not just the people who come to your church.” Rural churches are involved in outreach simply as a matter of heart, not program. They minister to the community because they love their neighbors.

The 2017 Gathering focused on a variety of different outreach programs followed by an afternoon of brainstorming. The Rt. Rev. George Sumner, bishop of the Diocese of Dallas, spoke about how the new strategic plan of the diocese is based on the strength of the laity, a topic very familiar to the rural churches. He introduced the development of programs to license Lay Evangelists and Lay Catechists to assist rural and small churches of the diocese with no or part-time clergy.

Being the church God uses

In 2017 the gathering also began its second decade, so time was set aside to once again “check in” on the current challenges of the rural churches. When the RCMC was formed the lack of clergy was a major issue. Now, however, most of the rural churches do have clergy, many of them part-time. The rural church challenges now are more similar to the challenges of the urban church, although the rural church might have a bit of an advantage over the urban churches in some ways. For example, it’s much easier to communicate, and it’s more likely that church members are well known in the broader community. It is easier to become visible in a smaller community, and small towns often have a central meeting place that urban areas don’t have. So the need now is how best to tap into those advantages and take the Gospel out to meet the neighbors. The disadvantage is, of course, the smaller number of neighbors there are to meet.

Every Gathering focuses, in one or more ways, on “Being the Church God Uses.” As Dallas Missioner for Evangelism Carrie Headington says, “It’s really all about prayer, care and share.” And in today’s world, it’s about doing it outside the church walls.

Rebecca Wellborn is the Chair of the Rural Church Ministry Commission in the Episcopal Diocese of Dallas. 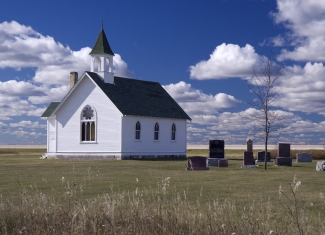