Sharing the Bounty of God’s Garden

God’s Garden is one way in which St. John’s Episcopal Church, West Hartford, is trying to connect with the people who live in the church’s neighborhood. Since last spring, we have been growing vegetables to give away to our neighbors. Every Tuesday morning, a handful of volunteers have come to the church to pick what is ready in the six raised beds. Then they wash the day’s harvest and display it on a table by the sidewalk fronting the church’s lawn. Kale, chard, spinach, lettuce, broccoli, tomatoes, squash and herbs were among the table’s bounty as the summer advanced.

At first, St. John’s neighbors were shy about coming to the God’s Garden table. Many found it hard to believe that we were actually offering vegetables free of charge. Passers-by often avoided eye contact with our volunteers because they assumed we were selling something. They were surprised when we greeted them and introduced ourselves as belonging to St. John’s – “that big church over there.” It was clear that these neighbors may have walked by the church for years, but had never met any of the congregation. The vegetables from God’s Garden have begun to open their eyes to see St. John’s as people and not just a pile of buildings. 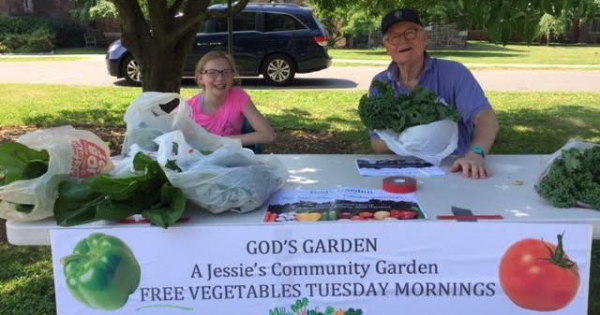 Likewise, our volunteers have learned a lot about St. John’s neighbors during conversations at the vegetable table. We have learned that many of the people living near our church are immigrants who have come from all over the world and speak English as a second language. We discovered that some have learned English in a program offered in our parish house. We have found that a lot of our neighbors do not have cars and find it difficult to get food, particularly fresh food. And we have learned that many have little idea about what happens behind the red doors and stained glass windows of churches like St. John’s, or about what we believe and why we exist.

Like many congregations, St. John’s neighborhood has changed considerably since its house of worship was built. When the Norman Gothic church and parish house were erected at the end of a trolley line in a newly developed suburban area, St. John’s was very much a part of an affluent neighborhood with substantial family houses springing up around it. Children from the neighborhood filled the large Sunday School, and many members walked to worship. Today the parish neighborhood is much more urban than suburban, its impressive buildings and spacious landscape surrounded by commercial enterprises, professional offices, multifamily dwellings and apartment houses. Most parishioners live some distance from the church and are strangers to the neighborhood around their church.

God’s Garden came into being out of a growing conviction that St. John’s isolation from its neighbors has to change. If, as Jesus commands, we are to love our neighbors as ourselves, surely we have got to begin to know who those neighbors are. And our neighbors have got to begin to know who we are. The relationships that have begun at the vegetable table this summer are a step in that direction. In early September, we did something else. We threw a block party with church tours, bands, food and a kids’ bouncy house to welcome the local community. God knows where all this will lead!

Bill Eakins is a Priest Associate at St. John’s, West Hartford. During his fifty years of ordained ministry, he has served in urban, suburban and rural parishes and as a college chaplain. 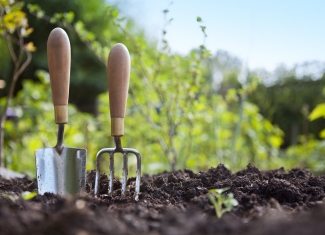