Early this past June, clergy-lay teams from more than ten congregations in nine dioceses settled in at Kanuga Camp and Conference Center in Hendersonville, North Carolina, for a three-day educational intensive on stewardship, discipleship, adaptive leadership, parish finance and administration and more. They were participants in the Episcopal Church Foundation’s (ECF) Congregational Leadership Initiative (CLI), a year-long program in collaboration with the Church Pension Group (CPG), designed to provide resources, tools and other support to help congregations collaboratively address the leadership and financial challenges of congregational ministry in the 21st century. CLI is aimed at newer clergy (ordained in the past five years) and those in new positions as rector or priest-in-charge. Two lay leaders from the congregation complete each clergy leader’s team. CLI is part of ECF’s Lilly Endowment National Initiative to address the economic challenges facing pastoral leaders.

On the second evening of the Kanuga retreat, Kate Adams, ECF special projects director, moderated a panel called “Leading Change.” She asked panelists, representing both lay and clergy perspectives, to share their stories and discuss different types of change in their unique contexts.

Christine Galli was a member of the team from Christ Church, Detroit, where she’s the senior warden and leader of the church’s Detroit Reading Camp. Christ Church recently celebrated its 40th anniversary and is no newcomer to change in the community. As many know, Detroit saw incredible community change in 2008, when the collapse of the area’s auto industry left “Motor City” in peril. Christine noted that while Detroit is recovering, Christ Church’s population no longer mirrors the population outside the church. With renewal, a new community has developed, leading to new opportunities for outreach to the congregation’s neighbors.

As part of its CLI work, the Christ Church team is exploring the realities of what Detroit used to be, what it is becoming and what it will become in the future. Christine underscored their realization that to lead change, they couldn’t just sit back and say, “we’re good where we are.” Christ Church’s leaders, along with its members, have to re-imagine the church’s role in the community and find their purpose once more.

Not too small to make a difference

The Rev. Rachael Pettengill-Rasure, rector at Church of Our Saviour, brought her leadership team from Milton, Massachusetts. Racheal explained to the audience that the church’s current concerns were an over-reliance on the endowment and lay leader burnout. In response, the team has worked to shift the narrative from one of scarcity to one of abundance. Rachael explained that part of this shift includes an emphasis on gratitude for the energy, passion and people of the congregation, along with a mantra – If we believe we are too small to make a difference, then we are too small to make a difference.

These words quickly led to action as the congregation refocused on listening and opening up to change. The result? A program, “Courageous Conversations towards Racial Justice,” designed to talk honestly and openly about race, racism and community bias. Offered in collaboration with the Milton Interfaith Clergy Association, the program has brought people from all over the larger community into their small parish. In fact, the first time they held the program at the church, thirty new people walked through its doors.

Remember who you are

Change has been challenging at Grace in the Plains in Virginia. Shane Pixton, a lay leader at Grace, explained that the past ten years have been one long transition, involving several major leadership replacements and the exodus of many members. She emphasized that throughout this decade, parishioners and Grace’s leadership team have worked tirelessly to maintain their identity. For example, Grace Church Woodchucks coordinates parishioner teams from Grace and several multi-denominational congregations to cut and deliver firewood to local residents in need. That effort has been an important part of Grace Church’s community service for the past 15 years. Grace is also known for its desire to support and maintain the artistic community. This winter, Grace’s concert series will celebrate its 20th anniversary season, and the Shakespeare Opera Theatre will perform “Romeo and Juliet” at the church, as part of its fourth season. These vital ministries and relationships keep people focused and in community with one another through tough times.

Continue to be in relationship

Change takes various forms, and Kate asked panelists to detail the types of change they had experienced and how internal or external change have affected their congregations. The Rev. Morris Thompson III, rector at Church of the Mediator in Meridian, Mississippi, explained that much of the change affecting Mediator was external. Changes in the surrounding community have compelled church members to wrestle with the question: What does it mean to be a part of the neighborhood?

For decades, Mediator had been a well-known institution in the local community, one that let everyone know that it was serious about sharing God’s unconditional love. In the 1970s and 1980s, the Rev. A.C. “Chip” Marble (who would become Bishop of Mississippi in a few years) established the congregation as a progressive bastion in the community. Mediator was one of the first LGBTQ supportive congregations in the area, and Chip worked closely with the local NAACP chapter.

Morris pointed out that as 2020 draws near, changes in the neighborhood make-up have led many to question the congregation’s place in the community. He’s convinced that when changes occur, big or small, the focus should remain on being in relationship with community members, rather than seeing the church’s role as merely providing a commodity. Morris and the congregation’s leadership team are determined to make sure that Mediator remains a place of welcome as things change, a place where kids love to congregate and play basketball and where parishioners live into their mission to be a welcoming and affirming community.

The Rev. Winston Arthur agreed with Morris. Changes in the surrounding community are affecting his parish, St. Michael and All Angels (SMAA), in Stone Mountain, Georgia, as well. The culture at SMAA had become very rigid, and tensions existed between groups, as only a few controlled the larger parish community. Those changes led this faith community to seek a return to old methods and ways of being church, methods and ways that mean a greater sharing of leadership, empowering more lay leaders and building strong ecumenical relationships.

In the panel discussion, Winston shared his insights on the presence of conflict during periods of change. He has significant experience as a lawyer and mediator, and emphasized that conflict is always present in some form or another. What is important, in his view, is how we respond to conflict. That’s what separates successful outcomes from failed ones. Winston asked audience members to consider their interactions in situations involving parish conflict, how everyone must work to name the conflict and discuss the “whys” and “why nows” at those oft-stressful times.

He went on to explain that SMAA was dealing with generations of anxiety and fear around money and the parish’s finances. Before beginning to tackle this well-established mode of thinking, he began a listening campaign with his parishioners. “Amazing things can happen when people are able to share and feel heard by church leaders,” he said. Winston also highlighted, from his own experience, the power of a third party – an outsider who can act as mediator and facilitator for tough conversations. Together, these two tactics have begun to chip away at those ingrained worries and to rebuild trusting relationships at St. Michael’s and All Angels.

Going off the map and feeling good

As panelists told their stories and answered questions from the audience, Kate asked them to share a specific moment when they felt they were “going off map” and their feelings around charting a new and unknown course. Christine Galli began by advising lay leaders to stay strong and prayerful. She said it’s important to the overall health and future of the parish to focus on maintaining programs during times of transition to keep souls fed.

Winston noted that anxiety can build up over generations and across relationships. He stressed the need to acknowledge the past and recognize that anxieties will not disappear overnight. Change takes time and sometimes occurs over generations.

Morris reminded us that the way individuals and groups perceive change can vary. Issues that we view together as a church might not be seen in the same way by others. Conversations need to include multiple perspectives and interpretations. He argued that a willingness to go the distance with things that people might not fully understand or agree with is an important aspect in keeping strong during times of change.

Adriane Bilous serves as Project Coordinator for ECF's Lilly Endowment Initiative, "From Economic Challenges to Transformational Opportunities.” She works to support all aspects of the three-year grant, including management of resources for new project initiatives, mitigation of new project issues to ensure successful project completion and post-project evaluation. 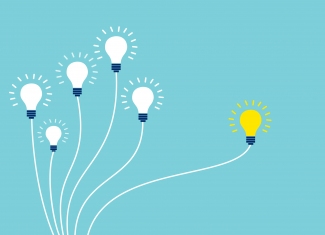