If a picture is worth a thousand words, then an icon is one thousand painted prayers. I glimpsed God’s brush stroke during the passing of the peace one autumn Sunday in 2017. The passing of the peace at Saint Ambrose, Raleigh, NC, is a sensory experience of smiles, laughter, hugs and handshakes. One eight-year-old member took the hand of a first-time visitor, also eight years old, leading him to a newly installed XII Station of the Cross written in the Ethiopian iconographic tradition that depicts all characters as Africans. Pointing upward to the icon, the young church member said, “See. Jesus looks just like you!” Both boys were African American. The eight-year-old made a profound theological statement. He did not say, “You look like Jesus,” meaning the human looked like the divine. He said, “Jesus looks just like you,” meaning the divine imprint was on this young African boy.

That XII Station of the Cross in the Ethiopian Orthodox Tewahedo Church tradition hung as the only Station in that tradition at that time. The other thirteen Stations were lithographs by the Italian artist Giuseppe Vicentini. Jesus, in those Italian paintings, had pale skin and blond hair. That autumn Sunday both eight-year old boys passed four Italian Stations of the Cross to get to the one Ethiopian Station. It was in that African Station both boys saw the divine in themselves, not in the Vicentini Stations.

The journey to the Ethiopian Stations of the Cross took nearly three years. Saint Ambrose is a historically black Episcopal congregation, beginning shortly after the Civil War in 1868 as a mission to formerly enslaved persons of African ancestry. The congregation today is 400 members, and 95 percent are black. The images of white Jesus on the wall did not reflect the congregation.

After the worship committee spent a year searching for more diverse Stations, I reached out to D.C. Christopher Gosey, an African American icon writer in the Ethiopian, Byzantium and Russian traditions living in New Hampshire and commissioned him to write the Stations in the Ethiopian tradition. After two years, Gosey completed all fourteen Stations, with Presiding Bishop Michael Curry baptizing and anointing the final icon at the church’s sesquicentennial celebration in December 2018. According to Gosey, Saint Ambrose may be the only church in the world with Stations of the Cross in the Ethiopian iconographic tradition, since Stations are not a part of Ethiopian spirituality.

Ethiopia is an example of what I term Indigenous African Christianity, which is Christianity in Africa before European colonialists and slave traders. Ethiopia has been a Christian nation since 324 C.E., when King Ezana in Axum converted to Christianity and began minting coins with the Byzantium Cross, the first nation in the world to do so.[i]

Icons are “God’s words in lines and colors,”[ii] and icon is the Greek word for image. Colossians 1:15 reads, “Jesus is the ikon [image] of the invisible God.” Icons communicate the theology of the Incarnation, Jesus Christ as the Word made flesh. They are “windows into heaven.” One looks “through” them into heaven. Icons look out toward us, not our looking in toward them. They give the spiritual, rather than the physical, reality. When praying with icons, faithful people observe their colors, facial expressions and details the way one observes words and phrases when reading scripture. Icons are doorways to silence and stillness while focusing on God’s creation as seen through the icon. The fourth century theologian, St. Gregory of Nazianzus, wrote, “Look at and be looked at by the great God.” It is an apropos quote. Icons allow us not only to see the divine, but to be seen by the divine in a way that affirms and enlarges us.

The icons at St. Ambrose

D.C. Christopher Gosey wrote the icons at Saint Ambrose in the Gondarine tradition from 18th century Ethiopia, with detailed images of clothing, hair styles and genre scenes. The 15th century Ethiopian Emperor Zara Yaeqob described how an image (icon) came to life. “This icon is clothed with a (human) body. It moves and talks. The Spirit of God dwells in it. You should not think that it is a mere picture. She is, indeed, Our Lady the Virgin (herself) and he is Jesus, the only begotten Son (himself). Michael and Gabriel too are as themselves, as that icon [has spoken] to a certain monk.” [iii] Emperor Yaeqob’s testimony showed that some Ethiopians did not view icons as simply images or paintings, but rather having great spiritual significance.

Henri Nouwen wrote in his book, Behold the Beauty of the Lord: Praying With Icons, “The gaze is clear and benevolent. The same eyes that see into the heart of God saw the suffering heart of God’s people and wept. These eyes that burn like flames of fire penetrating God’s own integrity also hold oceans of tears for the human sorrow of all times and all places.”[iv]

The legacy of white supremacy continues to do excruciating damage, distorting the divine image in people. That eight-year-old theologian gazing at the Ethiopian icon and exclaiming, “Jesus looks just like you!” felt the great God looking at him in a way that affirms him and enlarges him. He saw himself in God’s color palette and in God’s crayon box. That icon, as a window of heaven, radiated God’s love to him as warm as the sun.

The Reverend Jemonde Taylor is the eleventh rector of Saint Ambrose Episcopal Church, Raleigh, NC. Jemonde serves the Diocese of NC as a member of the Standing Committee, Diocesan Council, the Discipline Board and co-chair for the Bishop’s Nominating Committee. Jemonde is a board member of the Seminary of the Southwest and the Gathering of Leaders. He is a member of a five-person group recently awarded a $400,000 Henry Luce Foundation grant to produce a film and multimedia project on gentrification, race and theological education and practice. Learn more about his ministry by viewing his presentation, Wrapped in Whiteousness, on the Episcopal Church Foundation’s YouTube channel. 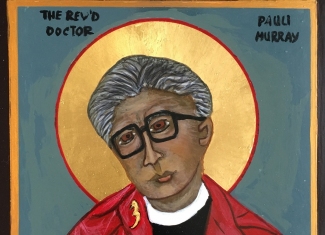