On Sunday, June 30, 2013, the congregation of the Church of the Heavenly Rest in Abilene, Texas became bilingual. That was the day two Swahili-speaking families from the Democratic Republic of Congo (DRC) arrived with their confirmation certificates in hand and announced, “We would like to join your church.” I was serving as the associate rector at the time, and I remember the specific date because the rector was preparing to leave on a month-long vacation the next day. “I guess this is what I am doing in July,” I thought to myself.

Over the coming weeks, I got to know these and other members of a small but growing East African refugee community in our West Texas city. Fleeing war, famine and genocide, many of these people had lived in refugee camps for years before being resettled in a place where they would be free from the violence that had ravaged their countries of origin. While the local chapter of International Rescue Committee (an organization that provides emergency aid to refugees and asylum-seekers throughout the world) provided some assistance, the needs of these new Texans remained considerable.

Initially, Heavenly Rest’s response to this new constituency was to meet their immediate physical needs. We sponsored trips to the grocery store, collected and distributed furniture and connected people with job opportunities. Within just a few weeks, more refugees from places other than the DRC (and traditions other than Anglicanism) began attending worship and participating in the life of the parish, at least in part because they had heard they could find a welcome at Heavenly Rest. Though we had not been prepared to welcome a refugee community into our midst, I was impressed with how the congregation met the challenge. Indeed, after a few weeks, I could even say that I was proud of what we had been able to provide for the most vulnerable members of our community.

Meanwhile, however, Heavenly Rest was neglecting the spiritual needs of our new parishioners. Most members of the community did not speak English, meaning that their ability to participate in the worship life of the congregation was limited. My initial approach to this dilemma was almost comic. Knowing that Bikole Mulanda, one of the family patriarchs, had been a French teacher, I provided him with a Book of Common Prayer in French. After a few Sundays, Bikole graciously thanked me for this liturgical resource, but intimated that it wasn’t particularly useful to anyone but him. He repeated a refrain that I had already heard multiple times, “We would like to worship in Swahili.”

I responded by telling him that we would get to that, but in the meantime, there were other physical needs that needed to be addressed in his community. Bikole’s gentle response revealed how profoundly I misunderstood the needs of these new parishioners: “We joined this church to worship God.” They did not come to Heavenly Rest for the social services the parish could provide; they came to our church to nurture their relationship with the God who created and redeemed them.

After some Internet sleuthing, I was able to locate liturgical resources in Swahili. Within a few weeks, Heavenly Rest had added a worship service in Swahili at one o’clock on Sunday afternoon. Before long, Bikole asked if it would be possible for us to have a service of Holy Eucharist in Swahili, and Heavenly Rest’s clergy staff set about learning how to celebrate the Eucharist in Swahili. The presence of this new community started to transform the worship life of the parish and the vocations of the clergy who served at Heavenly Rest.

About a year after the arrival of the refugee community, I was called to serve a parish in Pennsylvania. Before I departed, a member of the vestry assured me, “Don’t worry about the refugees: we’ll keep taking care of them.” This was heartening, an affirmation of how this community had impacted the parish, as well as an acknowledgement of an important dimension of my ministry at Heavenly Rest.

After I left Abilene, the Swahili-speaking congregation continued to grow, and before long the congregation had to move from the chapel to the nave. In the meantime, the leadership at Heavenly Rest made efforts to increase contact between the morning and afternoon congregations. Members of the one o’clock congregation were frequently invited to make musical offerings at one of the morning services, and attempts were made to create opportunities for cross-cultural fellowship.

In 2019, I was called back to Abilene to serve as Heavenly Rest’s rector. I knew that one of the first questions I would have to address was the relationship between the morning and afternoon congregations. After consulting with leaders from both groups, I realized that Heavenly Rest was still in a very reactive place when it came to this relationship. We were still responding to the presence of the refugee community in the same way as when they first arrived, asking, “What are we supposed to do about this?”

This was a natural and necessary question, and it shaped Heavenly Rest’s initial response to the refugee members of the community. Members of the parish had donated furniture, provided groceries and helped the newcomers find employment. Asking ourselves “what are we supposed to do?” allowed us to think of the relationship between morning and afternoon congregations in terms of a series of tasks to accomplish.

Once these tasks were accomplished, however, it was not clear what was supposed to happen next. As a result, the relationship between the congregations stagnated. In order for the relationship to move forward, we needed to transition to a more proactive place. After a while, with the help of leaders from both congregations and ECF’s Congregational Leadership Initiative, I realized that we needed to ask ourselves a new, and arguably more challenging, question: “Why has God brought these two groups of people together?”

Framing the relationship between these communities in terms of God’s action has created a new dynamic. Instead of focusing on what one congregation can do for the other, we have begun a process of mutual discernment – exploring how God is at work in this unexpected and wonderful relationship. On a practical level, we have instituted regular combined worship services that include songs and readings in both Swahili and English. Bikole Mulanda, the pastor of the Swahili-speaking congregation, now attends weekly staff meetings and provides updates about the work and ministry of those who attend the afternoon service.

On a deeper level, we have begun taking steps to better understand one another. Before the COVID-19 pandemic, leaders from both congregations began to design an intentional process of mutual discernment, one in which participants could engage in cross-cultural conversation and explore the varieties of Anglicanism represented at our church. We are hoping to be able to return to this process in the coming months.

As the relationship between the Swahili-speaking and English-speaking congregations has grown over the last seven years, Heavenly Rest has been reminded of what it means to be the Church. Despite our call to care for the poor and the vulnerable, the Church is not a social service agency. Our primary purpose is to bear witness to what God has done in raising Jesus Christ from the dead, an event that, in the words of the letter to the Ephesians, broke down the walls that separate us.

The Reverend David Romanik has served as the rector of the Church of the Heavenly Rest in Abilene, Texas since May of 2019. He is married to Sarah Beth, and has three young children. 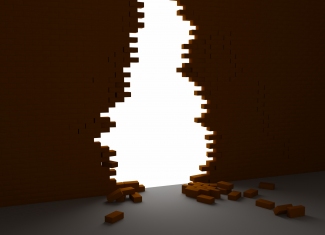