March 2021
Formation for the Missionary Church

The COVID Pandemic has pushed us to the limits of our creativity. The Holy Spirit has been active in the church and the world, driving the people of God to creatively use technology to create experiences that can in some way resemble what it is like to be together in person. While this has been difficult for our congregations, usually ranging from 60 – 300 people, imagine what it is like for Burning Man, a city of 80,000 people, to try to move online. (Hear Brian’s original sermon on his Burning Man experience here.)

Burning Man goes virtual and the Church shows up

Once a year, tens of thousands of people gather in the desert north of Reno, Nevada, to create a city complete with an airport, a public safety and health system and an abundance of public art. There are museums, night clubs, bars, coffee spots, theaters and places of learning. All of this activity comes from the participants, who work year-round to create experiences they can share with others. This bustling metropolis emerges from the desert for a week. This city is guided by ten principles, things like radical self-expression, civic responsibility, leave no trace and radical inclusion…to name just a few. Burning Man is not a festival. It is an expression of the human spirit’s yearning to create community that is inspired by beauty, embodies belonging, and seeks to care for one’s neighbors. Sounds a lot like the ideals of an Episcopal congregation.

When the Pandemic struck this year, Burning Man, like all large and small gatherings, was driven to try to go online. This forced our camp of Episcopalians and other Christian evangelists, Religious AF, to ask ourselves: are we going to show up?

For the last five years, we have been offering communion, blessings and conversation at Burning Man along with other Episcopalians, Lutherans, Presbyterians, Roman Catholics, American Baptists and others. This effort has evolved into a thriving, growing theme camp, and in 2020 we were planning for our largest year ever, adding classes and a dance party to our established array of eucharists, daily morning prayer, Bible studies – and open time, where people could come and speak to Christians who would simply listen to them in love and engage in conversation when invited.

Ultimately, our camp decided to participate in this bizarre experiment of a virtual Burning Man. That was our first key learning: to stay focused on the mission. With all we had to deal with in our “normal” lives, it would have been easy to say, “we just don’t have the bandwidth for that this year.” And in fact, during one of the many surges, we almost decided to skip this year’s Burn. But after prayerful discernment it became clear that Christ had given us a mission: to proclaim God’s Reign of love, justice and mercy to the far reaches of the Earth. And what is farther than an online Burning Man?

Let go, learn from others and see what Virtual Reality can do

A first step in transitioning to an online camp was to let go of offerings that just wouldn’t translate well virtually, like Holy Eucharist. We focused on what we did well that would translate: conversation, prayer and play. We knew the value of mutual invitation and open-ended, provocative conversation prompts. We knew how to craft liturgies for specific contexts. We created a liturgy with three distinct components: affirmation, lament, and blessing, which helped people connect with individual and shared joy and suffering. And we offered opportunities for people to come together and play as we explored the Virtual Burning Man.

A second step was to turn to other camps and the wider Burner world to see what we could learn. We found communities had been very successful creating intimacy and play via Zoom with simple things like inviting people to change their names on the Zoom window to something more descriptive/creative, having a host, distinct from the officiant, who would make sure everyone felt welcomed and invited to speak and when appropriate – which is always – to dance.

We also learned about Virtual Reality (VR). Much of the online Burn was going to take place in virtual worlds where people create avatars and engage with art and other experiences. In order to fully show up as a camp, we learned how to create a VR chapel space where people could gather (via their avatars) and pray or play together. In doing so, we learned the value of immersive digital experiences that engage people’s minds, hearts and souls, that spark curiosity, that transport people to some kind of liminal space. That is what our Episcopal liturgy does at its best, and VR gives us a new venue to do what we do well.

And it worked! We discovered that deep vulnerability and authenticity is possible online. When people came to our online worship, we created space for spontaneous sharing that, being held together by the safe container of prayer and scripture, allowed people to share deeply about their lives. We had to trust that guests would step forward, would share openly, and our trust was rewarded. People shared about their past wounds from the church; people shared about their deep longing to experience the “peace that surpasses all understanding,” and we were able to share vulnerably and honestly about how the love of Christ has transformed our lives.

A new way of being church

About half-way through the Burn we realized something more was happening. We were creating a way of connecting that was not going to end when our week at Virtual Burning Man ended. Normally we tear everything down and disband until it is time to plan and build next year’s camp. But a community was forming that did not want to wait until next year. There was no reason we could not continue our global, virtual church even after the Man burns at the end of the event.

We have learned a new way of being church. The pandemic created a hunger for connection. Virtual Burning man offered an invitation to learn new skills, try new things and engage a non-church community. By adapting what we already did well to a new mission field, we have not only engaged this new mission field, but we have learned how to be a better camp/church.

The Rev. Alex Leach is a fairly new Episcopal priest, having been ordained in 2019. He is currently a curate for Children and Youth Formation at St. Martin's Episcopal congregation in Davis, California. But he has been a long-time Burner, going back to 2010. He has a background in teaching and coaching individuals, families and teams in using Compassionate Communication to address conflicts and deepen intimacy and connection. His wife works as a hospice chaplain, and he has a delightful two-year-old daughter.

The Rev. Brian Baker is a West Point graduate, Army veteran and has been ordained for almost 30 years. He has served as a Cathedral Dean and in almost every aspect of Episcopal Church governance. In 2015, after attending his first Burning Man at the invitation of his young, adult daughter, he had a significant vocational shift and now focuses much of his time and energy on fostering a religious community of Burners through Camp Religious AF. He is also serving as Priest in Charge at Christ Episcopal Church/Christ Lutheran Chapel just south of Ft. Knox, Kentucky, where his wife Andrea, an Episcopal priest and Army chaplain, is stationed. You can learn more about Brian's ministry on his blog: www.deanbaker.org. 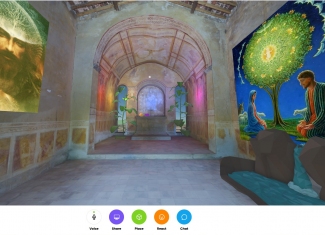