The daughter of Cuban exiles, I grew up in a home that taught me wherever there is God and family, everything is possible. My mother would always tell me, "Christina, I don't know what you will do when you grow up, but I do know it will be something weird and special." What I knew was that I never wanted take a job where I would have to write a lot or do any public speaking. This was my deal with God – or so I thought.

A deal can be edited

I remember visiting the Smithsonian Museums in Washington, D.C. as a child, and thinking to myself how cool it would be to spend the night roaming free through the different corridors. In high school, I took a course in Art History, and I loved it so much that after graduation, I registered at the University of Miami as an Art History major. My pact with God had to be revisited. I was willing to write a lot, but no public speaking for me. I was free to study and create art.

Over the years I experimented with different media. I enjoyed studying different artists from the past and trying to replicate their techniques to learn more. I worked at the university museum and student gallery, preparing for exhibitions. It was also in these years that I found my Episcopal Church home at the Chapel of the Venerable Bede on campus.

A year into school and sometime after my confirmation, I discerned a call to the priesthood. Again, my pact with God had to be revisited. At this point, I realized that I was never to say "no" to God again. I was willing and ready to write as well as speak in public.

My family was supportive of my call, though we realized that it would become necessary for me to leave home to study. During my years at the General Theological Seminary we talked on the phone every day. When a seminary employee found out about my daily contact with my family, he told me to come back to him in three years and tell him that I am still talking with them every day. (I won the bet.) During those years my artwork helped me cope with stressors, whether they were the after effects of 9-11 or more usual things like tests and coursework.

The importance of family and Cuban heritage

I grew up in tight knit family that spoke both English and Spanish at home – though truth be told, when we were kids, my mother would always speak to us in Spanish, even if we responded in English (and we did), and my father would get in trouble for speaking to us in English. We lived a bilingual life, fluidly switching from one language to the other. 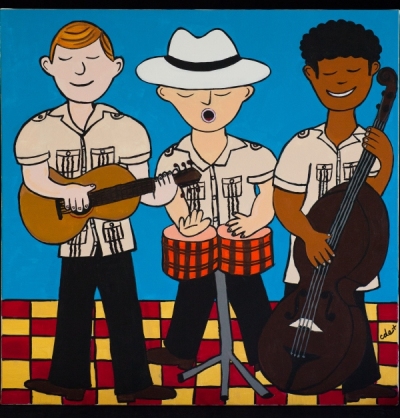 My parents both came from Cuba as children. My father was a Pedro Pan kid that arrived in the U.S. alone at fifteen. My mother was luckier in some ways, as she came with adults at age twelve. Both their families believed that this journey would be short-lived. They hoped to one day go back to their regular lives in Cuba. Instead, they sprouted roots here. My grandmother will soon be 96 and has yet to return, and my grandfather died in exile.

Mami and Papi met in their late teens and have been inseparable for over 54 years. What I did not learn until I was an adult is that they had made a pact with each other from the beginning. They contracted to never let anything come between family. If there was a need to flee again, no matter what, the decision would be to stay together. It was all or none.

They also made sure to keep our passports always current, just in case we needed to leave. Even if I did not know what they had decided until now, it is the way they raised my brother and me. Looking back, I understand the great sacrifice they made when I left for New York City to study.

Art as a bridge to God and to others

Art was and still is my biggest outlet. Over time, I would come to develop my own style. My favorite media are acrylic paint, colored pencil and oil pastels. I create when I am happy. I create when I am sad. Often, I create before I can link it to a mood or feeling; it oozes out from inside. I always have the hope that my paintings and drawings can reach the hearts and minds of others as well. 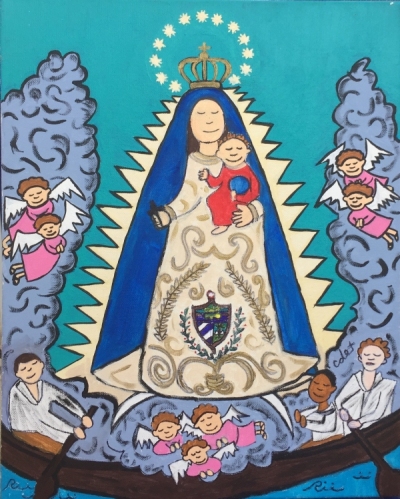 My influences are close to my heart. I joke that I am made in America with Cuban parts. One of my favorite paintings depicts La Caridad del Cobre, Patroness of Cuba and protector of seafarers. As a child we would visit her shrine in Miami at least once a year. My Cuban background has been a guiding force in my life, from its many stories to its language, food and music.

Most of my portfolio is made up of art from the past ten years or so. In addition to religious figures, I also like painting pictures of musicians and nature. Not only does it feel like my artwork brings me closer to God, it also helps me to relate better with others. I have always expressed myself better through art. It's true when they say a picture is worth a thousand words.

The Rev. Christina Encinosa was born in Miami, Florida, and lived in the same house in Coral Gables until her departure for seminary studies in New York. A graduate of the Ransom Everglades School and the University of Miami, she holds a Bachelor of Arts in Art History and Psychology and a minor in Computer Information Systems, as well as a Master of Divinity from the General Theological Seminary. A retired priest in the Diocese of Southeast Florida, she lives in Boynton Beach with Gerhardt, her loving husband of ten years and their dog, Kirby. Christina devotes her time to art, music and family. 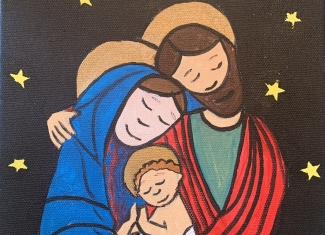