There is a back-story to the June publication of The Georgetown Companion to Interreligious Studies, ECF Fellow Lucinda Mosher’s most ambitious book project to date. As she prepared to defend her dissertation in February of 2002, Dr. Mosher took note of three Christian-Muslim relations initiatives launched by the Archbishop of Canterbury in January. Intrigued, she lectured on them that spring and then continued to follow them systematically. In time, it became clear that only one of the initiatives – the Building Bridges Seminar – was sustainable for the long term. Each year, the project invited some thirty Christian and Muslim scholars to spend several days together in dialogical close reading of texts (scripture primarily, but sometimes theological discourse and devotional literature as well) chosen to facilitate consideration of some specific theme, such as revelation, prophethood or justice. 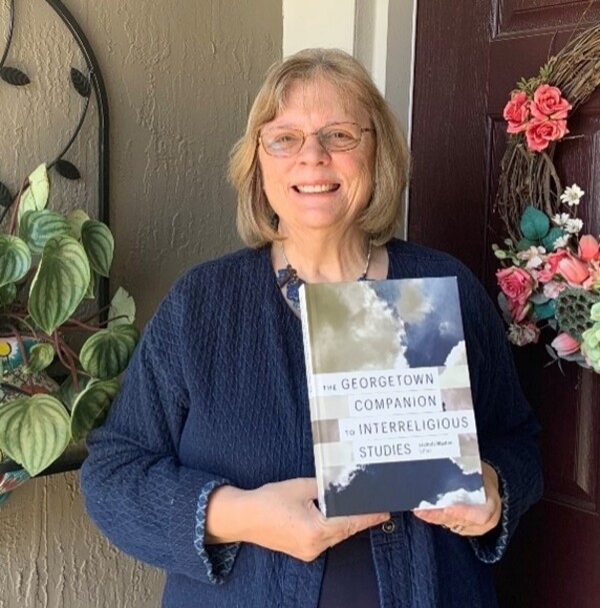 From Building Bridges invitee to seminar series rapporteur and editor

The published proceedings were valuable resources, which Dr. Mosher put to use in her teaching and shared with workshop and conference audiences. In 2011, she became a Building Bridges Seminar invitee herself, and in July 2012, as the project transitioned to the stewardship of Georgetown University, she was brought onto the Building Bridges Seminar staff. As the project’s rapporteur, she is active in each convening, but her primary responsibility is to edit the seminar book series, work that continues year-round. Over the past decade, she has edited nine Building Bridges Seminar volumes for publication by Georgetown University Press – seven in collaboration with David Marshall and two on her own. The most recent, Freedom: Christian and Muslim Perspectives, was released in December 2021. A tenth book entered the publication pipeline last month, and the eleventh is now in the first stages of formation.

In 2018, out of Dr. Mosher’s long relationship with Georgetown University Press, an invitation emerged to craft The Georgetown Companion to Interreligious Studies. In this comprehensive volume, released on June 1, she brings together an international roster of authors, each of whom offers a unique perspective on the nature of a rapidly developing, inherently multidisciplinary academic field. The book provides fifty thought-provoking essays on the history, priorities, challenges, pedagogies and applications of interreligious studies – which Dr. Mosher sees as the critical investigation of relations between people (whether individuals or groups) who orient around religion differently, however it is defined.

Prolific scholar, teacher and musician with a passion for interreligious understanding

Dr. Mosher’s work on these many edited volumes dovetails well with her role as a faculty member at Hartford International University for Religion and Peace (HIU; formerly, Hartford Seminary), where she has served since 2010. Working remotely from her home in northeast Florida, she teaches courses in interreligious studies, chaplaincy, theology of religions and ethics; co-directs the Master of Arts in Chaplaincy program; is a member of the Duncan Black Macdonald Center for the Study of Islam and Christian-Muslim Relations; and serves as senior scholar for Executive and Professional Education. In addition, she is the senior editor of the Journal of Interreligious Studies, an online publication created collaboratively by Hebrew College, Boston University School of Theology and HIU. During the first year of the COVID-19 pandemic, she and her journal colleagues published Deep Understanding for Divisive Times, a collection of short essays on interreligious studies, practice, teaching and engagement.
While working on The Georgetown Companion to Interreligious Studies, Dr. Mosher was also serving on the Episcopal Church’s General Convention Task Force for Ecumenical and Interreligious Work. Likewise, she maintained her practice of occasionally accepting a request for a journal article or book chapter. Among her recent writing is an essay, “On Sustaining Religion-Community in America: A Glimpse through a Multireligious Lens,” for James Murphy’s Faithful Giving: The Heart of Planned Giving, due out in the fall.

As was the case when she was named an ECF Fellow, Dr. Mosher strikes a balance between her academic vocation and her calling as a musician. Currently, she is the organist and choir director at St Mary’s Episcopal Church in Green Cove Springs, Florida. She also performs on recorder, bassoon and several other instruments – usually in an ensemble that includes her spouse of fifty-three years.

Will Lucinda Mosher take on another editing project as big as The Georgetown Companion to Interreligious Studies? “It’s always a possibility,” she says. But she has in mind a monograph on the arts and interreligious understanding – and hopes to get to work on it soon!

Compiled by the ECFVP editorial team

Lucinda Allen Mosher (ThD, General Theological Seminary, 2002) was named an Episcopal Church Foundation fellow in 1999. She has been affiliated with Hartford International University, and serves as faculty associate in Chaplaincy and Interreligious Studies and senior scholar for Executive and Professional Education at Hartford International University for Religion and Peace (formerly Hartford Seminary). Concurrently, she is senior editor of The Journal of Interreligious Studies and rapporteur of the Building Bridges Seminar (an international dialogue of Christian and Muslim scholars). A prolific scholar, Dr. Mosher has made numerous contributions to edited volumes and journals. She is the author of seven books, including Toward Our Mutual Flourishing: the Episcopal Church, Interreligious Relations, and Theologies of Religious Manyness (2012), and is the editor of eleven more, including The Georgetown Companion to Interreligious Studies. An accomplished performer on several instruments, Dr. Mosher maintains a parallel career as a musician. Currently, she is the music director at St Mary’s Episcopal Church in Green Cove Springs, Florida. 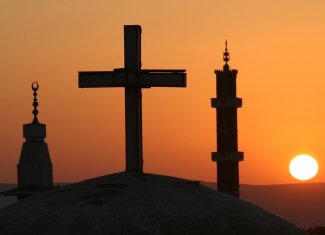