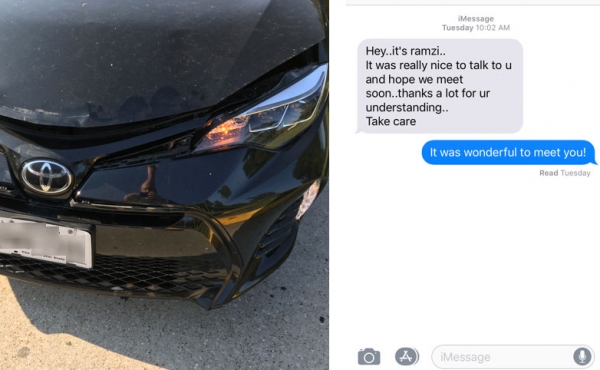 This past Tuesday I was at the red light next to St. Mary’s, and all of a sudden the car in front of me started backing up. There was someone behind me, so I didn’t have anywhere to go. I watched as the SUV in front of me kept backing up, and crushing my hood.

As if flood recovery wasn’t enough to deal with right now.

I’m safe, the car is drivable (which is good, because there are no available rental cars in Houston right now), and I now have a new friend.

When I got out of the car, the other driver gets out and walks up to me and apologizes profusely. It became apparent that English was not his first language, and he starts asking me what he needs to do. He’s never been in a wreck, but neither have I. We exchange information, and I call the county constables.

As we’re waiting for the deputy to arrive, the other driver and I start talking. At first it is mainly me reassuring him that everything is going to be fine, and I’m not mad at him, and that the insurance companies will help us sort it out. But then he asks me which church I work for.

Sometimes I forget I’m wearing a clergy collar, and in this moment I was surprised he asked about church. Then I point across the street, maybe 100 feet away, and say “right there.”

“Oh, St. Mary’s!” he says. “The Virgin is very important to our people, and very important in our book.” I take a chance and ask if he’s Muslim, and he enthusiastically says yes.

For the next 20 minutes, as we’re waiting for the constable to come write up an accident report, we share our faith stories with one another. We talk about how my parish and his mosque responded to the recent flooding. He had been in Jordan during the storm, and when he traveled back to the U.S. this past week his friends and family sent him with money for supplies.

Here we have a big, bearded, evangelical Texan standing next to a Jordanian immigrant with a wife wearing a burka. Too often, this scene is used to show how our world (or at least our perception of it) is at odds. Christianity vs. Islam. American (Texan, more specifically…) vs. Immigrant (Middle Eastern, more specifically…). Perpetrator vs. victim (at least in some sense…).

But in this moment, none of that mattered. What mattered was that we were two fathers, talking our families and our faith, and talking about the outpouring of love we have seen in our communities since Harvey.

The deputies arrive and we’re interrupted by paperwork, but we both knew our conversation had to continue. So my new friend invited me to lunch later that week. And at lunch, he invites me to visit his mosque the next week (which I’m planning to do).

When the SUV in front of me first started crushing my hood last week, I was mad. Everyone in Houston is busy and exhausted right now, and this hassle was the last thing I needed. Or so I thought.

As is often the case, what I think I need and what I actually need are two completely different things. I wanted a day of “normalcy,” of going to staff meeting and working on a sermon and having one less thing to deal with. But what I needed was a deep and rich conversation with my new friend Ramzi.

What conversations do you need to have with people in your community?