Like many people, I’m intrigued by the ethics of lying. What does it mean to tell a lie? Is lying always wrong? Unlike most people’s experience, however, my search for answers to these questions led me to the thirteenth century.

Searching Aquinas for the truth about lies

I’m a theological ethicist by training, and in my work I frequently draw upon the thought of Thomas Aquinas, the thirteenth-century theologian and Dominican friar. I first encountered Aquinas’s writing on truthfulness when I was graduate student. What immediately struck me was the way in which he addresses lying as a moral problem. Unlike all the contemporary authors I had read, he doesn’t begin his analysis by considering whether lying is ever permissible. He doesn’t start by trying to answer the classical moral dilemmas, such as what one ought to do if an intruder asks if there’s a refugee hiding in the house. Rather, the starting point of his analysis is the claim that truthfulness is a moral virtue, and from this it follows that lying is one of several speech acts that are incompatible with that virtue.

I was intrigued by Aquinas’s approach to the morality of lying because it was unlike anything else I had encountered in contemporary Christian ethics or moral philosophy. There’s no shortage of scholarly literature on Aquinas’s views about lying, so I eagerly sought out interpreters who (I had hoped) would help me gain a better understanding of his arguments. Instead, what I found in the secondary literature was several conflicting interpretations – none of which seemed to reflect Aquinas’s actual views.

One thing that nearly every author had in common, however, was the conviction that, according to Aquinas, lying is always wrong. This means that there must be a universal moral norm against lying, and it ought never be done under any circumstances. Yet, these authors couldn’t agree on what exactly made lying intrinsically wrong. Some argued that lying is wrong because it violates the natural function of human language. Others argued that lying is intrinsically unjust or that it is opposed to the basic goods of human society. These divergent interpretations generated further points of disagreement, including differing views on what it means to tell a lie.

It seemed to me that everyone was missing the point. The key insight of Aquinas’s approach is that truthfulness is a moral virtue. This claim is grounded in his broader theory of virtue and what it means to be a human being, but it gives us a different starting point for considering the morality of lying. Truthfulness, according to Aquinas, is related to the virtue of justice, but it’s not the same thing. There are subtle but important features that are unique to the virtue of truthfulness. Many lies that we tell – lies to make ourselves look better, or to avoid hurting someone’s feelings, or perhaps even to save someone’s life – aren’t unjust, even if there is something disordered about them.

It’s also not quite right to say that lying is wrong because it’s opposed to the function of language – as if language could be understood apart from a specific account of what it means to be human. If we want to understand what’s wrong about lying, we need a moral concept of truthfulness. In other words, we need an account of what it means for humans to use language virtuously.

I concluded that a new interpretation of Aquinas’s views was sorely needed, and I might as well be the one to write it. So I wrote a doctoral dissertation under the supervision of Jean Porter at the University of Notre Dame. Along the way, I published portions of my research in book chapters and journal articles, and I presented papers at academic conferences. Most recently, I completed a book manuscript, Lying and Truthfulness: A Thomistic Perspective, forthcoming from Cambridge University Press. My research continues to generate new lines of inquiry, and I can’t imagine ever feeling that I’ve exhausted this fascinating topic.

Truthfulness is more than refraining from lying

One of the great advantages of Aquinas’s understanding of truthfulness is that it illuminates so many aspects of the moral life, in both its personal and social dimensions. For example, it helps us to see that being truthful requires much more than refraining from lying. Aquinas explains that the truthful person’s words are clothed with “due circumstances,” meaning that they know when and how to say the truth. They also know when it’s appropriate not to say anything at all.

Lying isn’t even the only sin against truthfulness. Aquinas also lists boasting, mock-modesty and nonverbal dissimulation among the vices opposed to truthfulness. This rich analysis invites us to consider additional ways one might sin against truthfulness, and in my book, I propose that truth indifference is rife in the present day. As with lying, truth indifference involves a misalignment between what we say and what we actually think, but rather than asserting a distinct falsehood, indifference to truth means that we simply don’t care if our words are true. We say them because we have some other objective in mind, whether it’s to manipulate others or to make people like us more.

Truth and lies and health care

Since finishing the book manuscript, I’ve begun to think more about the implications of this account of truthfulness for questions that come up in applied ethics. For example, there is vast literature in health care ethics on the question of whether it’s ever permissible to lie to patients. It may seem that there are some cases where lying would be not only harmless but beneficial. Perhaps a patient who is terminally ill might be able to live her final days more peacefully if she (wrongfully) believes that she has a good chance of recovery.

But proposals like these don’t simply ask us to consider the effectiveness of certain lies; they also assume a great deal about the nature of reality. In the Christian tradition, the concept of a good death includes adequate preparation for meeting one’s Maker. As we pray in the Great Litany, “from dying suddenly and unprepared, Good Lord, deliver us” (The Book of Common Prayer, p. 149). Being deceived about your impending death hardly counts as adequate preparation!

In scenarios like these, the practice of health care leaves little room for neutrality. The intimate relationship between truthfulness and truth is brought into sharp relief, and health care ethicists need to take a more honest look at the complexities of this moral question. At the moment, I’m working on an article that addresses these complexities, and of course I’m drawing on my previous research on truthfulness and the thought of Aquinas, but I’m also extending it into new territory.

As a professor of theological ethics, I don’t have the answers to all our complex moral questions, but I do have a calling to think through these questions within and on behalf of the Church. I’m profoundly grateful for organizations like the Episcopal Church Foundation that enable scholars like me to pursue this sacred calling.

The Rev. Dr. Stewart Clem (ECF Fellow ’17) is Assistant Professor of Moral Theology and Director of the Ashley-O’Rourke Center for Health Ministry Leadership at Aquinas Institute of Theology. He lives with his family in St. Louis, Missouri, where he also serves as Priest Associate at the Church of St. Michael and St. George.

Picture - Tomb of St. Thomas Aquinas at the Church of Jacobins 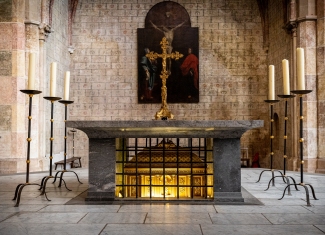