In 2010, I presented a workshop on Christian stewardship practices in Hendersonville, North Carolina. This presentation took place at Nuevo Amanecer, a conference for Latino Episcopalians conducted almost entirely in Spanish. The twelve or so attendees who gathered in the conference room that day were lay and clergy leaders of Spanish-speaking congregations.

I was there to present how most mainline congregations do annual fundraising, practices undergirded by the theology of stewardship – mayordomía in Spanish – in which all Christians are called upon to be stewards – mayordomos – of all that God has given us. Just a few slides in, however, I noticed that several participants appeared both skeptical and perplexed.

Eventually one of the attendees explained to me that the Spanish word I was using for steward, mayordomo, had negative associations where he was from, that he would never want to be a mayordomo. In Bolivia, for example, mayordomos were the overseers who had exploited people like him and his family, the property/business manager-in-charge who employed violence to squeeze every cent they could from the blood and sweat of their workers. There were nods around the room as people recognized that ‘stewardship’ was a peculiar term to be praising, as it was so closely associated with exploitation and injustice.

As ‘stewardship season’ begins, I am conscious that for some this period is the only time Episcopal churches preach and teach about money. Yet experiences like the above – as well as further explorations into who stewards were in the Gospels – have led me to question stewardship as a way of describing faithful relationship to God’s abundance.

Indeed, those who promote stewardship must wrestle with the fact that stewards are frequently presented as morally dubious characters in the Gospels. In several stories, stewards are the foils to Jesus’s scandalous generosity, and they are closely linked with dominion, exploitation and injustice. It is a steward, for instance, who at the wedding at Cana (John 2:1-12) critiques Jesus for saving the good wine for last. At the outset of the parable of the unjust steward (Luke 16:1-13), a good and faithful steward is exploiting his master’s land and people.

While the steward counts beans, Jesus transforms water into wine. While a steward exploits the land and people, Jesus praises the one who remits the debts of the poor.

I therefore wrestle with the doctrine of stewardship. This wrestling came to a head during the COVID-19 pandemic as I watched how church and society addressed disease, a new wave of global poverty and the increasing inequalities between rich and poor. This ultimately spurred me to reflect and write on what Jesus had to say about wealth, poverty and stewardship. And in the end, I found hope in Jesus’s parable of the unjust steward (Luke 16:1-13).

The parable of the unjust steward takes place on a vast agricultural estate, one in which a landowner and his property/business manager, the steward, had pressed workers into forms of debt bondage. Biblical scholars have noted that the steward here was likely a “first slave,” or a man who had been freed from slavery for the purpose of serving as manager and overseer of the other slaves, day laborers and tenant farmers who worked the land.[1]

One day, the rich landowner suspects the steward of squandering his wealth. Before any proof or defense can be made, the landowner fires the steward, at which point the steward panics and comes up with a plan for survival after news of his dismissal becomes widely known.

His plan for survival is a curious one. Whereas previously the steward had extracted wealth from those he had overseen, the steward now begins to send his master’s wealth flowing in reverse. He does this by using that wealth to remit the debts of the slaves, day laborers and tenant farmers who were indebted to the master. Biblical scholars have noted that these debts were so large that they were likely the debts of entire villages.[2] The steward does this in the hope of being welcomed into these laborers’ homes after he has been dismissed from his role.

Surprisingly, the steward’s decision to use the landowner’s wealth to remit debts ends up being praised by both the master and Jesus. Jesus concludes this parable by appearing to praise fiscal immorality in a line that has perplexed interpreters for millennia: “And I tell you, make friends for yourselves by means of dishonest wealth so that when it is gone, they may welcome you into their homes” (Luke 16.9). Jesus then states that like the steward, everyone must choose their master in life: “No slave can serve two masters; for a slave will either hate the one and love the other, or be devoted to the one and despise the other. You cannot serve God and wealth” (Luke 16.13).

Who then are stewards, and what is stewardship?

At the outset of this parable, the steward’s actions are highly exploitative and unjust. The faithful steward extracts wealth from the land and its workers so as to maximize returns and profit. Yet the steward only gains safety and salvation when he begins to send the money in reverse, to alleviate debts, in an act of economic jubilee. In essence, the faithful steward finds salvation in an act of anti-stewardship.

All of this may seem like quibbles over vocabulary, yet how Christians talk about money is one of the most relevant issues today. And I am hardly alone in questioning stewardship as a good framework for doing so.

Writing in the 1930s, the American theologian Reinhold Niebuhr criticized mainline Christianity’s idolization of stewards and stewardship. In “Is Stewardship Ethical?”, a short article he wrote for the Christian Century in 1930, Niebuhr traced the origins of stewardship to the influence of business leaders and wealth managers in mainline Protestantism during the industrial buildup between the two World Wars.[3] He describes stewardship as a naïve framework that allows the church to avoid asking the harder questions about its sources of wealth, including the unjust means by which such wealth was made.

Niebuhr gives the example of “the pious business man” who is both honest and generous, two virtues which “give him the satisfaction of being a Christian.”[4] Yet this pious businessman “regards his power in his factory much as kings of old regarded their prerogatives.” “Any attempt on the part of the workers to gain a share in the determining of policy, particularly the policy which affects their own livelihood, hours and wages, is regarded by him as an attempt to destroy the divine order of things.”[5] The doctrine of stewardship does not help this businessman see his broader moral obligations but only serves to “sanctify power and privilege as it exists in the modern world by certain concessions to the ethical principal.”[6]

Niebuhr’s critique resonates with what I’ve observed in the last fifteen years of working for the Episcopal Church, which is ‘stewardship’ being used to justify ongoing exploitation. I’ve now personally observed multiple instances in which ‘sound stewardship’ became the rationale for church organizations not divesting their endowments from fossil fuels. In these conversations, being faithful stewards of the organization’s assets meant first and foremost maximizing returns, never mind the exploitation of the earth and the poor.

Niebuhr concludes his article by insisting that stewardship is an inadequate framework for how the church talks and thinks about money. “There is not one church in a thousand where the moral problems of our industrial civilization are discussed with sufficient realism from the pulpit to prompt the owner to think of his stewardship in terms of these legitimate rights of the workers.”[7] Niebuhr challenges the church to find a better approach for thinking about God’s abundance, one that not only asks critical questions about sources of wealth but also recognizes “how necessary and ultimately ethical are the restraints of an ethical society upon man’s will to power and his lust for gain.”[8]

Therefore, I question stewardship as a sound way of describing how Christians should relate to God’s abundance. Frankly, I don’t see much in Jesus’s life or in the Gospels inviting us to be shrewd wealth managers. What I do see are repeated invitations to join in what the late Episcopal LGBTQ+ advocate Louie Crew once described as Jesus’s “promiscuous generosity” – a form of generosity so open that it scandalized not only stewards, but onlookers and disciples alike.

Therefore, as stewardship season begins, I hope faith leaders will recall the remarkable truth of the parable of the unjust steward. In the end, the steward gains new life by releasing his master’s ill-begotten wealth for the remittance of debts; he gains refuge by serving those he’d formerly exploited. In other words, this ‘first slave’ chooses which master to serve -- and I believe the Church must do the same. On stewardship, Jesus concludes this parable: “You cannot serve God and wealth” (Luke 16.13).

Miguel Escobar is the author of The Unjust Steward: Wealth, Poverty, and the Church Today, a book that explores how wealth and poverty, inequality and economic justice are treated in the biblical and early church theological tradition. He serves as executive director of Episcopal Divinity School at Union and writes and leads workshops and conversations on Christianity’s complex and contradictory relationship to money. 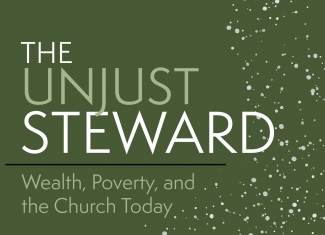