One Sunday, I greeted a couple as they were leaving the service at St. Elizabeth’s with their recently baptized child. That service was particularly difficult for the parents as their almost one-year-old child’s behavior caused quite a few disruptions. The frazzled parents could barely make it out the door. As they tried to shake my hand, the father turned to me and quietly said, “see you in five years.” That was almost two years ago and I have not seen them since.

This encounter saddened me. Later that week, I reviewed the parish database and noted that these parents were among 33 families with children under age three who had not attended a Sunday service for months. Almost all of the youngest members of these families had been baptized within the previous two years. Before that encounter, I had never questioned the trend that families with small children would avoid church attendance for a season.

Perhaps 33 families were too many to allow to slip quietly into the void between baptism and church school? Like many parishes, our records showed that once these families slipped into this void, many did not return. Instead of accepting this loss, I started calling these families and asked them to help us understand why parish life was difficult to navigate with infants and toddlers.

Almost all of the families said that they considered themselves members of the church; some were still regular pledgers. They shared that they could not attend church because they did not have the time or they found bringing their children to church too much of a challenge for them as parents.

Their challenge became my challenge. I decided to start conversations within the parish about ways to re-engage these 33 families. I began to wonder if somehow this void might be contributing to the systemic decline of mainline churches. Perhaps the systemic decline is not a mass exodus of parishioners from our parishes, but a slow leak from a break in the pipeline.

So how did we spring a leak in this pipeline? The Episcopal Church’s definition of systemic decline is the lack of people of child bearing age in the pews or, put bluntly, more funerals than baptisms. Who are the people in childbearing years and why are they not in church? There are so many answers to this question: the time issue; priority challenges; the difficulty in balancing faith, work, and family.

Before serving at St. Elizabeth’s, I worked part-time as a new priest and a new mother at Church of the Holy Spirit, Wayland, Mass. From the first day, with baby Margaret in hand, parishioners asked me how the church would address the lack of families with small children. The parishioners were discouraged as they had tried numerous church school curriculums, but none of them seemed to draw families or children. After several discussions about the leak in the pipeline from the reservoir of families in their community into the church, one of the parishioners, Kara Brewton, drew a diagram.

The diagram shows a series of pipelines, starting with baptism and continuing seamlessly through participation in church school, youth group, or acolyte programs to an end at high school graduation. Often a break in the pipeline occurs due to lack of a curriculum or leaders for the church school, youth group, or acolyte programs. Breaks may be invisible from Sunday to Sunday, but over time they could spring leaks of parishioners out of the parish, interrupting the flow of Christian Formation from baptism to young adults in church.

Highlighting the lack of families with infants and toddlers as a part of the pipeline was a new idea for me. Parents in the void were not even considered when a diagram of the pipeline was first drawn. I believe this is because the lack of children under three and their parents is accepted without question in many Episcopal churches. But if the parents of infants and toddlers are a leaky section for many Episcopal churches, is it possible that this void could potentially diminish any advantage a seamless age three to 18 Christian formation program might offer to a parish?

Using the pipeline metaphor, the parishioners approached the challenge by doing simple maintenance on their church school system by asking the simple question of what could we be doing better and who is not being served under the present system.

It was this spirit of maintenance that a few of the church school teachers at St. Elizabeth’s came up with an idea to address the void. The teachers applied these maintenance questions and identified the families of infants and toddlers as a target for improvement. The teachers found there was a need for a program for children too old for nursery but too young for church school and created a new space specifically for them, the Transitional Atrium. Church educator Beth Santomenna describes the program: “Children in the transitional atrium begin to explore the quiet rhythms of the Catechesis of the Good Shepherd, learning to fall in love with God by exploring practical life activities and working with developmentally appropriate materials, singing songs, and coming together in prayer.”

The program was successful, meeting the needs of a variety of families: those with 3 year olds not ready for church school as well as families with children having special developmental issues. But the children were not the only ones receiving the benefits of this new program. When I reviewed the list of children who attend the transitional atrium, I found that their parents were among those who were involved in another initiative addressing the void: a series of Parents’ Night Out.

Parents’ Night Out drew in parents who would have normally not been in church at all. These special social events, which include babysitting for their children, gave parents a place to meet each other outside of the Sunday service. At first, I thought that these non-Sunday initiatives might replace Sunday participation. To my surprise, these small initiatives managed to increase the participation of the parents in the void category, thus plugging a potential leak in the pipeline.

The pipeline is not a reservoir that funnels hundreds of people into the pews. Instead, it is about the power of faith transmission through one-on-one endeavors. The metaphor replicates how Jesus called his disciples: Andrew told his brother Peter, who told others. The beginning of the pipeline for Jesus’ cohort of twelve disciples may have been small, but it is how Christianity spread through the ancient world and continues in the present.

In my search for solutions, I found answers among the collective minds of parishioners who were the Andrews and Peters for their communities. By examining their part of the pipeline, these parishioners came up with creative ideas such as a new church school curriculum at Holy Spirit and the transitional atrium and Parent’s Night Out events at St. Elizabeth’s.

Valerie Bailey Fischer served as assistant rector at St. Elizabeth’s in Sudbury, Massachusetts and at the Church of the Holy Spirit, Wayland, Massachusetts. She recently accepted the call to become rector at St. Mark’s Episcopal Church in Teaneck, New Jersey.

Youth Spiritual Growth and the Church of the Holy Spirit 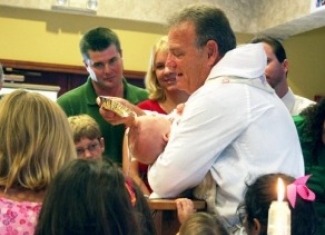