Ongoing Discernment: The Way of Jesus

In July 2010 I wrote a short piece for Vestry Papers discussing ways my vestry and I have worked to create a culture of discernment at St. Matthew’s Episcopal Church, St. Paul, Minn. Since 2006, ongoing wondering conversations about what God is up to in our church, neighborhoods, and lives have played an important role in shaping our communal imagination and life. One of the great gifts of this emerging congregational culture – the fruit of it – was the ability to discern a way of life our entire faith community could embrace. This was a pretty amazing feat given the fact that the people of St. Matthew’s come from all over the U.S. and world (twelve non-Western nations are represented), are dispersed throughout the Twin Cities metro area, and come from many different theological backgrounds.

For those who did not see my earlier essay, over the past nine years the people of St. Matthew’s have committed to beginning every meeting with prayer and a time of “dwelling” in scripture. Dwelling consists of engaging scripture imaginatively, wondering about it and paying attention to the words and images that jump out at us. It is part Lectio Divina, part Ignatian prayer, and part Godly Play. In the biblical story of the Pearl of Great Price, for example, someone might wonder what the pearl was, or why someone was willing to give everything to possess it. We also invite participants to raise a question they would like to ask a biblical scholar. This question is not answered, however, until the dwelling time is over. Dwelling is about raising questions, not answering them. One of the objectives is to show lay leaders that engaging with scripture doesn’t require a seminary-trained “expert.” God can speak to them and their daily experiences through scripture.

Over time Dwelling in the Word has become one of our core communal spiritual practices. The other is Eucharist. Almost every time members of our faith community gather together, they engage in one of these practices. While these practices are powerful in themselves, we often don’t create spaces for people to interpret them theologically together. In many different venues, continually, and over time, we have intentionally cultivated spaces to reflect on how the biblical story and Christian practices relate to our daily lives.

Two years ago the vestry oversaw a more in-depth discernment or wondering process, as we sought to discover what the people of St. Matthew’s and all who joined us thought about God and God’s movement in their daily lives. We wanted to learn more about their hopes and hungers, and what they wanted to learn about the Christian faith. We wanted to know if it was possible to come up with a shared vision of the Christian life in our particular context. We also wanted to learn more about the language and spiritual practices that spoke most deeply to the people entrusted to our care.

Once the vestry agreed to undertake this more intensive discernment effort, we appointed a discipleship task force comprised of vestry members and others in our community interested in learning more about how the people of St. Matthew’s understand God, and what they would like to learn more about. After some initial planning meetings, always beginning with prayer and dwelling in scripture, they came up with a series of groups representing a broad cross section of our community – from people who grew up in the Anglican Church overseas, to twenty-somethings, to empty nesters, to parents of young children. The groups were asked questions like, “What does it mean to you to follow the Way of Jesus in daily life?”

After all the interviews were done, the discipleship task force presented what they learned, and the questions this learning raised, to the congregation at the annual meeting. This brought everybody on board early in the game. The presentation was preceded and followed by many newsletter articles letting people know what was happening and what was being learned.

The Way of Jesus Task Force followed on the heels of the work of the former task force. For this group, I looked for lay leaders who tended to be theological – people who often asked what God was up to in a particular situation, or were able to connect the themes of a particular conversation or meeting to biblical themes or stories. This group conducted additional focus groups, asking more finely honed questions, and then sat with and prayed over all the “data,” all the words and insights that had emerged. And somewhat amazingly to this group, eight spiritual practices emerged clearly: story, prayer, simplicity, discernment, reconciliation, hospitality, generosity, and gratitude. We came up with short descriptions for each of these spiritual practices, trying to use fresh and non-churchy language. We then drew on the expertise of vestry members who excelled in process, and learned from them how to “test out” these practices to see how they resonated with the congregation.

The Way of Jesus at St. Matthew’s was shared publicly in September 2013. Since then it has been our spiritual GPS. Whenever a new idea comes up at St. Matthew’s (I am presented with multiple great ideas every week), we can now ask, “how does that relate to the Way of Jesus at St. Matthew’s?” It has given us focus. Because it emerged from the congregation rather than being imposed by the clergy, staff, or the vestry, there is widespread acceptance and engagement. From the beginning we have made it clear that this Way of Jesus is not one more program, but a way of life intended to help us as we live out our faith in the world.

Those facilitating gatherings to learn more about each of these spiritual practices make no assumptions that people know what spiritual practices like prayer are, or how to pray. At each gathering we dwell in a scripture text related to the spiritual practice. We ask questions like, what is prayer? Or have you ever had a powerful experience of prayer? We teach people different ways to pray that they can then try out during the week. We also assign simple “homework” like praying for the people you encounter during the day, and people come back the following Sunday to share stories of what happened. Probably most importantly, these gatherings are relatively safe co-learning spaces. Participants can ask any questions or share their struggles and doubts without being shamed, and the format is always facilitated discussion, never a lecture.

I can’t begin to tell you how exciting the response to this Way has been. I think we are actually engaging the questions, practices, and hopes of our congregation, and the discussions are amazing. In the first session on Generosity we dwelt in the Parable of the Prodigal Son. Not long into the dwelling participants began to share powerful stories of alienation and reconciliation in their families and lives, including a parent attending the wedding of a gay son even though he had formerly refused to meet the son’s partner or visit their house. The dwelling was so rich that I jettisoned the rest of the day’s questions on the spot. Part of embracing a culture of discernment is letting the Holy Spirit move as God’s story links up with where people are in our world.

Blair Pogue is rector and lead pastor of St. Matthew’s Episcopal Church in St. Paul, Minnesota. Her passion is for encouraging all people to discover their spiritual gifts and serve God’s purposes in the world. Prior to joining St. Matthew’s in 2005, Blair served as associate rector of Church of the Holy Comforter in Vienna, Virginia. A graduate of Whitman College and Yale University Divinity School, she pursued doctoral studies in American religious history at the College of William and Mary. 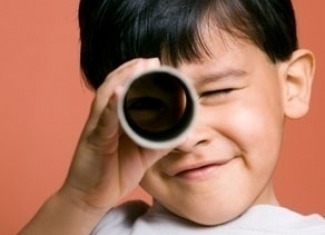