It all began when we finally acknowledged how badly we needed a new roof on the parish house. Everyone knew the shingles were shot, but we were dreading the cost. Our priest encouraged us to have a consultant from ECF come and talk to us about a capital campaign. A capital campaign would specifically address the need for funds to replace the roof, and would do so in keeping with our mission to our community.

Ms. Linda Buskirk, an ECF consultant, attended our vestry retreat and explained the capital campaign process. While we had difficulty imagining that we could accomplish the goal she believed we could, we slowly began to realize that whatever we raised would be more than if we did nothing. And, we still had the question of what was St. Matthew’s long-term vision about mission.

We assembled a team who began to dream about what projects, large and small, we might want to engage in. Ideas ranged from the cheaper and less complicated ideas of how to make our buildings more attractive and functional, to the extravagant remodeling of the undercroft to make it completely accessible and available for everyone in the community. The leaders of this effort were largely ‘the usual suspects’ in the congregation—from the person who usually promotes annual stewardship, to the person who is considered ‘the property person’. But we also tried to include newer members who would bring fresh ideas to the table.

One of the difficult tasks was sorting out whether projects were helpful and exciting or necessary. For example, we spun our wheels for a while about the structural integrity of the church building as we considered undercroft renovation.

Next, we went out and got very preliminary bids for those projects, and brought all the information back to the annual meeting. Here we each were given stickers to vote for the project(s) we thought most important. The projects were posted on large paper around the parish hall, and we all had a chance to vote. Not surprisingly, the roof got the most votes but the surprise was that kitchen renovation quickly floated up—a move many of us didn’t see coming.

The vestry voted to contract with ECF to help us in a formal campaign. Throughout this part of the process, we were blessed to have a contributor who was donating money “wherever you need it most,” and those funds became the seed money for our campaign. Ms Buskirk helped us understand that if we clearly told our story of why these projects supported and furthered our mission, and the projects were the right ones, people would have no problem contributing to the campaign. With this kind of encouragement, we tentatively moved forward.

We didn’t have enough members to fully flesh out all the committee assignments that we needed, but we also didn’t need to reach all the people expected in a larger campaign. We worked hard to keep the campaign in front of people regularly as we did the background tasks. We faltered to keep things going as key members went south for the winter. We were challenged as key individuals had personal issues that drew their focus away. But we persisted.

We finally narrowed down the project list to a financially manageable size. We went through the normal campaign steps and discovered that likely givers were in agreement that most top priority projects were shared concerns, and they were willing to be supportive.

We kicked off the campaign with a wonderful catered dinner by the local vocational-tech students, and everyone was amazed at the size of gifts that had come through the “silent” phase. The vestry agreed en masse to act as the campaign workers (calling committee). While it was a new experience for some, all were willing to pitch in.

We closed the solicitation phase and have been actively receiving donations for about six months. Now, we are re-connecting with contractors to complete the long-anticipated roof.

Here are some of our key learnings as a small church going through this process: 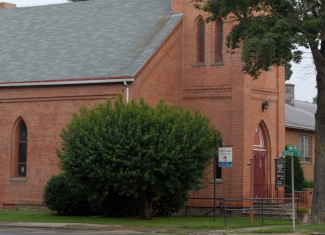