September 2019
Mobilizing our Assets for Mission

An Audacious Spirit of Abundance

A spirit of scarcity can tear a parish down. A spirit of abundance can build one up.

In 2013, Church of the Holy Communion had lost a third of its attendance over a ten-year period and pledge giving had fallen more than fifteen percent in five years. The often-told story of church decline seemed to be writing itself again in Memphis, Tennessee.

In that difficult time, we looked to the Old Testament wilderness narrative for inspiration. We studied the Israelites’ wilderness journey and especially its ending. In Joshua, when it was time to enter the Promised Land, God did not part the waters of the Jordan River until the leaders of the community stepped out into the river. The Israelites needed the courage to do their part before God did his part. We felt led to do the same.

Our first step into the Jordan was establishing the Audacity Fund – roughly $7,500 drawn from our cash reserves that we made available to support special projects. When someone came up with a new idea that could push the church forward, the Audacity Fund would provide the money. There were two rules: The fund would not provide for anything that we had ever done before, and every Audacity Fund project had to be as big and bold as we could manage.

Our first Audacity Fund project was a community concert. Memphis is a music town, and Holy Communion has a large front lawn on a major thoroughfare. We rented a tent, made a sign and put up a temporary fence to keep kids from running into traffic. Sloan River Project (the Kanuga and Episcopal Youth Event house band at the time) added us to their tour that year, and pianist Benton Stokes came from Nashville to be the opening act. Local food trucks assembled to sell food for dinner, providing a source of free advertising within their networks. Aside from an ill-timed rain shower, it was a perfect evening.

The lawn concert reminded us that we were able to tackle big projects, and that they might not be as expensive as we thought. When the concert was over, the Audacity Fund still had money left over, and parishioners had begun sending unsolicited donations to replenish it. Everyone wanted to know what we were going to do next.

A year later, the Audacity Fund hosted a festival of three sacred arts. The initial idea was to revive a then-defunct diocesan choir festival, but we expanded on that by commissioning a new parish hymn. Music professor Bill Roberts from Virginia Theological Seminary wrote the score, Lutheran hymn writer Susan Cherwien provided the text, and Episcopal artist Mel Ahlborn created a beautiful illumination of the first verse. All three artists came to Memphis for the festival and spent the weekend teaching their crafts to people from our parish, our neighborhood and our diocese.

Slowly, one project at a time, the impossible began to seem possible. The waters began to part, and the Promised Land came into view.

Our third Audacity Fund project was a ministry project with some of our urban partners – “ministry with” being the key phrase rather than “ministry to.” We asked our friends at Emmanuel Center, a longstanding Episcopal youth development center in Memphis’s urban core, what sorts of projects they needed to have done, and we recruited volunteers from both communities to carry them out, employing neighborhood tradespeople to do the skilled work. Theologian Kathy Grieb came from Virginia Theological Seminary to offer theological reflections – and to wield a paint brush! – as the weekend went along. Every work team had people from Holy Communion and people from Emmanuel Center. We began with a shared meal at Holy Communion on Friday evening and concluded with shared worship services at Emmanuel Center on Sunday morning. Good work was done and good friendships were forged.

As the spirit of abundance grew at Church of the Holy Communion, stewardship giving began to grow as well. We used our first new dollars to make visible investments in our facilities. We replaced peeling wallpaper and removed stained carpets. We moved the large portraits of former rectors out of our entryway and installed acrylic frames to display colorful photographs from recent parish events. Within a few years, the church’s building started to convey the newfound energy and hopefulness of the congregation.

Since 2013, Church of the Holy Communion’s vibrancy has increased dramatically. We reversed our decline in attendance and grew our stewardship budget by a sustained 34.5 percent. We have just finished a major capital campaign and will soon have all of our facilities completely restored. Reclaiming Christ’s spirit of abundance breathed new life into Church of the Holy Communion, and we are excited to discover what audacious things God will ask us to do next.

The first verse of our parish hymn captures the present spirit of our community well:

This, the gold of all our hoping:
God is making all things new.
Alleluia be our measure;
Alleluias mark our days;
May each breath, each deed, each pleasure,
Choir to God our heartfelt praise.

The Reverend Sandy Webb has served as rector of Church of the Holy Communion and a trustee of St. Mary’s Episcopal School in Memphis, Tennessee, since 2013. Previously, he was associate rector at St. John’s Episcopal Church in Roanoke, Virginia, and chaplain to Roanoke Fire-EMS. He served for fifteen years as a worship planner for the General Convention of the Episcopal Church. 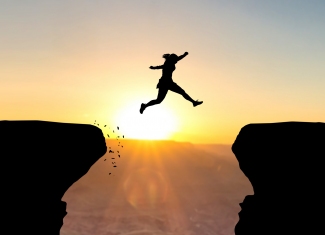