Serving on and maintaining a church vestry is a challenge and a blessing. Almost anyone who has been on a vestry or worked with one will tell you that. A vestry brings the community’s voices, wisdom and diversity of experience to the table to think and pray about the congregation’s past, present and future. At the same time, I’m sure almost anyone reading this can see the million-and-a-half places where this can go awry and end up in tension, disagreement and just flat-out anger.

It becomes all the more complicated when we try to cultivate a vestry culture that doesn’t reflect the segregated social culture. A properly multicultural vestry is an uphill challenge. Most places in our society tend to be segregated to a certain extent – sometimes self-segregated for various reasons, sometimes forced for prejudicial ones. A multicultural vestry is a countercultural idea in many ways, and there just aren’t many models we can to look to for guidance.

One of the first and most constructive things we did at St. Cyprian’s, where I serve as vicar, was to ditch the idea that being a multicultural vestry was optional and make it a requirement. We wanted diverse groups represented and made diversity a part of the vestry’s mission. We understood this as a spiritual imperative, in keeping with Jesus Christ’s association with a diverse cadre of people in the gospels. The Book of Acts also shows us a wide variety in the early church, ranging from the Ethiopian eunuch, who represents ethnic and sexual/gender diversity, to the apostles at Pentecost, blessed with the gift of speaking in different world languages. Knowing that being multicultural isn’t just a buzzword, but an intrinsic part of the Christian way of life since the time of Christ, helps keep the commitment as a priority.

God gave us the spiritual resources to engage one another in a spirit of unity, not uniformity. A multicultural vestry really appreciates and lives that out. Great, fantastic, you might be thinking. But how do we go beyond just committing to the concept and to actually doing it?

The next step in the process is building trust. This is really key and not a “one and done” kind of deal. A multicultural vestry may have to go the extra mile to build and maintain trust among its members. This happens over time and experience. Sharing meals and praying together, along with a commissioning ceremony at the start of a new vestry, have all been helpful for us. Additionally, things like planning vestry retreats and making sure to ask all the members what they’d like to do or have happen are great steps toward developing trust.

Another key aspect is communication. Don’t be afraid to share your thoughts and ideas. Vestry meetings can be an uncomfortable place to speak for all kinds of reasons – lack of confidence in language skills, general nervousness with speaking, etc. Once initial trust is built, we have to learn to trust further that our fellow vestry members will listen to us, and to do that we must speak.

Alongside that, if others need help expressing themselves, be sure that you’re helping them and not just inserting your words into their mouths. Part of good communication is genuinely listening to other folks’ perspectives and ideas. It doesn’t have to mean agreeing, but it does mean being respectful. Miscommunication is common in multicultural situations, and can trigger all kinds of sensitivities and emotions. Listening is a hugely important step in reaching a level of personal understanding.

A multicultural vestry needs to cultivate a universal sense of humility among its members. Not the humility that thinks poorly of yourself or lets others steamroll over you, but one that recognizes that a single person or culture doesn’t know everything or have all the answers to life and our various circumstances. Be open to learning from and genuinely appreciating those who are different from you. Appreciate those differences – don’t just gloss over them. Loving one another in spite of differences or pretending they don’t exist is a recipe for disaster and is unsustainable.

Part of appreciating differences means understanding that people differ in their sense of what may offend or hurt someone. Being careful not to universalize our own experiences and making space for the different experiences of others helps us see and respect their struggle and pain. If trust has been done well, then failures to understand or respect another can be largely avoided, or if encountered, navigated with grace and care, without fracturing the community.

Remember that while people’s experiences often reflect their larger group, they do not “speak for” those groups. An opinion may be common in a particular community, but no one can speak for everyone. Be careful to avoid expecting a single person to carry the voice of a whole community of people.

Caleb Tabor is vicar of St. Cyprian’s Episcopal Church, a bilingual, multicultural congregation in Oxford, North Carolina. He was educated at Elon University, Emory University and Virginia Theological Seminary. Originally from North Carolina, he has settled close to home in Durham, where he lives with his husband, Logan. Theology, coffee, comedy, creative writing, meditation, queer issues and drag queens are just a few of the things that keep him occupied in mind, body and soul. 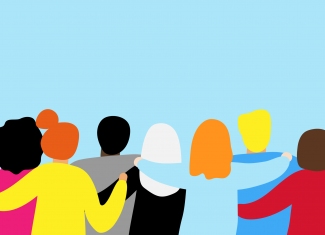