“Look around, look around, at how lucky we are to be alive right now….” Remember a year ago, the weekend of July 4th? The cancelled fireworks, the skyrocketing infections, the hospitals running out of beds, our disbelief that this pandemic was getting worse, the pain of losing our loved ones, the statistics, the political campaign, the virtual worship, the cancelled choir rehearsals, the debate between communion or ante communion … George Floyd. And in the midst of such disorienting times, it was the powerful music of Lin Manuel Miranda, and his re-imagined history of the founding fathers fighting for freedom for all (truly for all) that brought us a cooling breeze and a sense of union, relief from the zoom fatigue and the uncertainty. This is just one of the many examples of how music and the musicians who executed, performed, recorded and shared their gifts with the world were among the great heroes of the pandemic.

Music kept us sane, gave us a purpose, moved us to bring our hearts together in emotions of solidarity, support and compassion. Music helped us feel better about ourselves, about our world. Musicians all over the world, from every genre and from every style, shared their gifts and skills with the hope of providing some sanity and love to a world folded in two by COVID-19.

And church musicians were no exception. When the news came that singing would spread the virus, making it more dangerous, church musicians in one way or another, perhaps some fancier than others, all of us, jumped into action and provided an answer to the question: What now?

Our music, the songs we sing, are impacted by many circumstances, pressures, interests and conflicts that have their origin in agendas not strictly theological or even Christian. I would like to paraphrase Espín by stating that church music, just like theology can be and has been, manipulated or crafted into the service of ideologies and interests that might not be transparent or honorable. To pretend otherwise would be irresponsible and naïve. In the words of Espín: being treated as a second-class Christian or theologian (or musician) because one does not live (or sing) or read in the culture of the dominant is doctrinally and morally unacceptable and an example of an imperial attitude that borders on idolatry.[1]

Since 2017, I have been sharing the story of how our two main Latinx hymnals, El Himnario (1998) and Flor y Canto (1984), are made up of songs that are not actually Latin American, although they have become part of the Latin American repertoire, thanks to common practices and the process of inculturation. Just as an example: In the Advent section of Flor y Canto (2nd ed.) there are 28 songs, only four of which are originally from Latin American composers. Similarly, in the Advent section of El Himnario, there are 23 hymns, and only three are originally from Latin American composers. This is an example of what happens when the lex canendi is established by the dominant voice in the church, even with the best of intentions.

A chance to experiment

Yet it was this pandemic that gave the Church the opportunity to experiment with non-traditional music. Here I cite two important efforts of the church to decolonize our lex canendi. With the support of the Becoming Beloved Community Grants, the Diocese of Indianapolis launched Worship with Bravery, a series of four videos that featured non-traditional music played by musicians of color from Christ Church Cathedral in Indianapolis. Initially this was a project to feature brave worship, worship done with songs that are non-traditional. Our goal was to invite more musicians, priests and congregations to experience this music and perhaps implement it in their own worship.

However, when the pandemic hit we needed to add two other levels of bravery. Not only we were making music that was non-traditional, but we were making music during pandemic times and we were musicians of color, making music at a time when we were constantly hearing the message that we, as immigrants and people of color, were not welcome in the United States. Furthermore, the Diocese of Indianapolis continued offering workshops to inspire us that included a series of virtual seminars with Dr. Alisha Lola Jones and Prof. Vince Carr from Indiana University.

Also, on November 1, 2020, our Episcopal Church livestreamed ”Holding on to Hope: A National Service for Healing and Wholeness” from the National Cathedral and featuring our Presiding Bishop Michael Curry (leaflet here). With the objective to shine as a beacon of hope for the nation amidst the COVID-19 pandemic, racial reckoning and a hard-fought election, the Episcopal Church and the National Cathedral put together a service that featured mainly contemporary music, songs from different traditions, and none from the 1982 Hymnal, sung by singers and musicians of color from all over the Church.

So, what did we learn as we experienced this music through a whole year of online worship? I believe there are four major lessons gleaned from these efforts. First, we learned that our church is ready and eager to start singing music from diverse traditions. Second, we learned that there were styles of music that are more adaptable to worship online and much more effective – contemporary songs, short songs, chants (traditional and contemporary), songs accompanied by guitar, songs in unison. Third, we learned that the priority of our music when doing worship online was not aesthetic but missional. In other words, the online worship experience was meaningful as long as congregants could engage with the music, whether they were music literate or not. Finally, we learned that our church is longing to sing a liberation song; a song that can bring us together as equals, a song that can affirm what we believe – that we are called to be a loving, liberating, life-giving beloved community.

Yuri Rodriguez just finished her first year at The School of Theology, University of the South, Sewanee, TN. She is a musician, singer, choral director and church leader who specializes in Latin American Music and Culture. 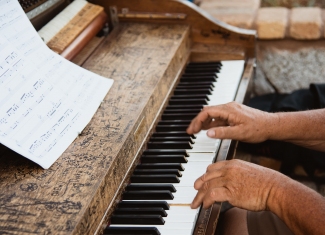