Music and Change: A Conversation with Dent Davidson

Dent Davidson has been exploring the music that we build into our worship since serving as a boy chorister in British Columbia, where he sang traditional Episcopal repertoire. At 16, he joined a gospel choir and fell in love with African American music, and from there he has kept growing and exploring ever-expanding ways to bring music that moves us and deepens our worship. Below, Sandra Montes shares highlights from her interview with Dent.

As Dent introduces himself, he talks about his deep love for African American music. It was foreign to him, because everything he had learned before that was from a page to either his voice or piano. He says that “their tradition was call and response, and they can throw every ounce of their being into it.”

Dent says, “I call myself an artist, and I think healing best comes through the arts because they are a deep part of the human experience. The music that happens around us is taken into our bodies and psyche, and the act of singing is healing because we are taking in beautiful, healthy air and letting out the bad. It’s beautiful in itself, but when you do it in community, it’s an experience that defies words.”

Early in our conversation, Dent sings Come Bring Your Burdens to God, and says that this song is eight measures of a simple call to come into God’s deeper, richer, more profound presence. Dent tells us about Threshold choirs – groups of people, often women, who go to hospices and homes where people are dying and sing people across the threshold from this life to the next. And people who are patients in memory care, the minute you begin doing “Amazing Grace” or “The Lord is my Shepherd,” oftentimes it will kick right in, because it went into our brains in a different way. We sang it – a different pathway that didn’t get wrecked because of the dementia.

Start with what you know and try things

Dent says that he has a soundtrack going all the time that includes pieces from world music to Stanford’s Magnificat to something in French and to gospel music. He’s often singing what he learned when he was eleven and a treble, things like Hear My Prayer by Mendelssohn and old, iconic Anglican pieces.

If someone were to ask him what they could do if they wanted to go beyond the Hymnal 1982, he would say to go back to it and use it with fresh eyes. You can make the hymns your own. You can sing Hyfrydol like a dance instead of the stately way we’ve usually done it. One of the great principles in Dent’s life is giving people permission to try things. He says, “Take what you already have and use it. And then we have several approved resources in the church that you can use, and you can go beyond that.”

“Planning is the heart of church music,” says Dent. He encourages us to wrestle with the scriptures first and ask ourselves what have we not heard before when we read these scriptures. One way to plan is by using the “Six Weeks Out” method – you look at the previous Sunday, the coming Sunday and the Sunday six weeks out. Once we tackle the scriptures, we can ask ourselves what’s going on in my congregation/city/country/world/creation? The conscious planning with the Word and as a team – music leader/preacher – is very important. It can be difficult, it takes time, but it is richly rewarding.

In planning, he says, “Don’t use a fence, don’t set a limit, you can always reel it back in. Take a chance.” We must remember that our job at the root is to unbind; we need to unbind the scriptures – the Good News – and act like we have good news to share.

He suggests the following resources for planning:

Instead of being expansive, many people approach our practice from: We learned it this way, we’re going to keep it this way, maybe we’ll try something new. Dent says that he thinks our church would attract more people if we showed them how much we have changed because of God, and because the way we sing together and worship together, not only makes us feel good but pushes us out those doors and into the world to serve.

When you are teaching music to a choir, particularly a difficult piece, Dent says that you can build on what you already know, week to week. First, you can sing the song to them. Then, you can repeat the words slowly. Then, you can speak the song in rhythm. You can use call and repeat and continue this until people learn it.”

When teaching a congregation a new song, you can play the melody on the piano, or any other instrument, during the offertory one week. Then the next week, you can teach them pieces of the song and use call and response for that. You can also use your bulletin to let people know that the choir will be singing a song one week and the congregation will sing it the following week, to prepare them. Building trust is most important when you want your congregation to sing.

When people are hesitant to try new things and to grow, or if they think they want to leave a church instead of trying new things, it’s a pastoral opportunity and they can be reminded that we work through, we pray through, we sing through, we live through our lives together and we do new things and old things. Dent says that we are called to teach the Church how to die and rise and that is our common ground.

Dent loves getting to know people and collaborating. You can reach him at DentDavidson@gmail.com.

Over forty-five years of professional lay ministry, Dent Davidson has been called to continual examination and re-imagination of church music and liturgy, embracing the best of received tradition and expanding it. He has served in leadership roles in several parishes, two cathedrals and on a diocesan staff. Each position focused on vitality in worship. Having earned a degree in Composition and Vocal Jazz, he travels widely as a workshop clinician and consultant in music and worship and serves as Chaplain and Musician to the House of Bishops. He currently serves Trinity Parish in Santa Barbara as Animateur: one who imagines, teaches and leads new ways of expressing ourselves in liturgy and music.

Interviewer Sandra Montes is the Spanish Language Resource Consultant at ECF. She was born in Perú, grew up in Guatemala and settled in Texas as soon as she could. Her passions are God, family (especially her son), music, education and writing. Sandra has been developing original bilingual resources for her church, school, and others for years. She has volunteered and worked in the Episcopal Church since she was welcomed in 1986. She serves as musician, translator, speaker, consultant and writer. She earned her doctorate in education in 2016 and is a full-time freelance consultant and musician. 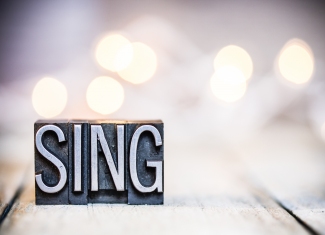