I grew up in a household of faith. My father had been a Catholic priest for 12 years in the sixties, before he was fortunate enough to meet my mother and marry. Like good Latinos, we always had a lot of people around the house. We were all like one big family. That’s why, ever since childhood, family togetherness has been a core value in my life.

From my youth, I felt God’s call to serve in the church. I came to know the Episcopal Church when I was ten, in the city of Santiago, Dominican Republic, where I was born. My whole family was welcomed into the Episcopal Church of San Lucas by the bishop, the Right Reverend Telésforo Alexander Isaac. I became involved in all the work of the church there, and especially music.

I was confirmed at the age of 12, and at 17 I expressed my wish to join the seminary and become a priest — a big change in my life. But my parents advised me to go to college first and then decide.

At college, I studied architecture, and during my second year I met Lilian, who would later become my wife. She was only 15 years old at the time, and I was 19. We were so young! Almost no one believed that our relationship would last. Many said, It won’t work; they’re too young; they’ll meet other people; they come from two different worlds.

We felt that we were in a struggle against the world, but we always believed that God had a purpose for our lives. The negative predictions became a challenge that we were not willing to lose. By Christmas of 1996, my wife had turned 18, and I was about to turn 23. We were married in the Episcopal Church of San Lucas. Bishop Julio César Holguín presided at our wedding.

In 2001, I began attending the Center for Theological Studies at the Episcopal seminary, and things got a little complicated. Lilian and I had to separate for a time, but we always trusted in the power of God to guide our lives.

I completed the required studies in 2004 and was appointed a lay minister for the missions of Jesús Nazareno and El Buen Samaritano in San Francisco de Macorís, a town in northeastern Dominican Republic. I was ordained deacon on February 5, 2005, and priest on February 12, 2006.

Before my ordination, we lived in four different places – a lot of changes in a short time. The children did not make a lot of friends, which was affecting them.

As a family, we have experienced good times, bad times, great times and terrible times. There were moments when we thought we couldn’t go on. Successfully facing the challenges that come up in family life requires us all to strengthen our relationship with God and to develop spiritual disciplines.

I feel that challenges are part of the "divine teaching" for us. At these times, when the message of the cross is not pleasant for many people, we Christians are called to remember that it is because of the cross that we are redeemed, that it is not a sign of comfort, but of sacrifice. Sacrifice means doing something that pleases God, although it may at times be uncomfortable for us. It can also be not doing something that makes us feel good, if it means obeying God.

This sacrifice is part of the priestly ministry. In fact, I feel that it is the major part. A testimony to that is the Dominican Episcopal Church, a church that is poor in financial resources but rich in the Holy Spirit and in missionary works. I don’t know any member of the clergy in the Dominican Episcopal Church who has just one assignment. The base assignment is always to a mission, and there are usually additional services at kindergartens, schools, shelters, clinics and others.

My first assignment was in San Francisco de Macorís with the missions of “Jesús Nazareno” and “El Buen Samaritano.” Additionally, I was principal of the Jesús Nazareno Episcopal School and the Buen Samaritano Children’s Home. There, we drew up a three-year plan and began to reap the fruits of our missionary efforts after two years. People’s participation in the services almost doubled.

The first year, we worked on our identity as Episcopalians and Anglicans. The second year was devoted especially to evangelistic activities, such as home Bible studies, conferences and workshops for adults and young people, retreats, etc. The third year was a time of expansion and growth, reaching out to people who had never been Episcopalians and bringing them into our communities.

I think that working on our identity, evangelism and growth can be helpful to our communities. They are so closely related that it is impossible to separate one from the others. We always have to be working on our identity; we always have to consider and proclaim the gospel; and it is always important to attract others for the glory of God and the growth of the Church.

After serving for nine years in San Francisco de Macorís (2004-2013), we were sent to the capital, Santo Domingo, to the missions of “Santísima Trinidad” and “Santa Ana”, where we remained 18 months. It was a time of transition and quite difficult. During our times of trial, God never abandoned us. His love kept our faith alive, and as a family we were witness to this.

The family context and Latino ministry in the U.S.

In 2015 we received a call to develop the Latino Ministry in the Episcopal Church of Santa Mónica in Naples, Florida. We arrived in the United States on April 2 of that year, on Good Thursday ­ precisely the day when the priesthood was established. So began a new challenge, in a new country.

In 2020 I responded to a call from Christ Church Cathedral (CCC) in Indianapolis to serve as Canon for the Latino Ministry, and in the year 2021, I accepted the call to become Canon of the Cathedral. In CCC I have found people who are committed, a spiritual family that strives to continue walking the way of peace in a society that challenges us to extend the loving arms of God in all we do. The cathedral community is especially active in the ministries of social assistance, defense of immigrants and minorities. At this point in my life, I feel encouraged to work on building bridges of love and justice between the different cultural contexts existing in the United States.

The most determined support that I receive in my ministry comes from my family. I have three beautiful children and a wonderful wife. We are, to the glory of God, a ministerial family. God has given me peace through them and through their love.

The family is the most important value bringing together the Latino community, and the need for family is greater than individual needs in Latino households. For this reason, the church cannot have a healthy Latino community unless it is integrated as a family.

As Latinos in the United States, we have many good things to share. I have known a community that works very hard to give the best of itself. I think that the family context is paramount in sharing God’s love and blessings. There is always somebody to welcome! Every day, there are people looking to feel at home. Here is our calling and our strength! After overcoming a multitude of situations, at the end of the day it is proof that the light of Christ shines over and beyond any adversity. Amen.

The Rev. Hipólito Fernández Reina was born and raised in the Dominican Republic. He serves as the Cathedral Canon at Christ Church Cathedral, Indianapolis. His priorities are God, family and the ministry, in that exact order. He graduated from the Center of Theological Studies, the Episcopal Seminary in the Dominican Republic in 2004 and was ordained to the priesthood in 2006. In the Episcopal Church he has found a spiritual family striving to continue walking the way of love in a society that challenges us to expand the loving embrace of God in everything we do. 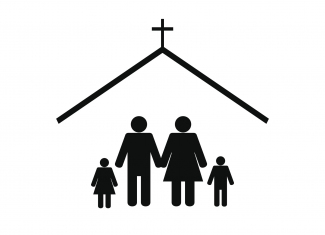