Do You Really Want To Talk About Reparations?

It is 2:00AM on May 15th, and I am sitting at my computer writing this piece on reparations in the midst of the Covid-19 era while thoughts of the murders of Ahmaud Abery and Breonna Taylor are swirling in my mind. And along with these are thoughts on several other reports of police misconduct and white supremacist bullying of African Americans who were simply trying to do their jobs, which led them into predominately white neighborhoods where they became crime suspects. And the thought that serious conversations about reparations must acknowledge this climate and the systemic foundation that gave birth to it.

Over the years I have vacated many discussions about reparations which generally began with a question about how white folks could figure out how to give all of the descendants of slaves some type of monetary compensation for the freedom and dignity taken away from their ancestors. Conversations that begin in this way seem much more about trying to find the easiest way to assuage the white guilt that is associated with being the beneficiary of the fruit that comes from the establishment of white supremacy rule in this land. And these are conversations that have no productive path to follow, because they are not focused upon finding viable solutions.

In the first place, there are many questions to be asked and answered regarding how to work to repair the breach caused by slavery. The first and most important one is how do you calculate what the loss of freedom and dignity are worth in terms of dollars and cents to the one losing them? So what is the amount of money that all of us are going to receive because our ancestors were stolen from their homeland and subjected to chattel slavery? What is the payment going to be attempting to cover? How can anyone be repaid for the loss of their chance to be who God put them on the earth to be? Clearly, I believe this trend of thinking about money alone being able to fix the country’s equity problems to be woefully inadequate. We need whites in the United States to step up to the plate and address the deeper issues about what is needed to repair the breach created by the white supremacist attitude that supported slavery and all of the oppressive structures that emerged from that way of thinking and continue to thrive now in the 21st century.

It is wearying to watch so many efforts to address the need to acknowledge the wrongs that were done to Africans, who were stolen from their land and brought to the United States and forced to help build it into what it is today, degenerate into a discussion about a few million dollars being allocated by Congress to try to figure out a slave’s descendants compensation plan. But no such plan is ever going to amount to anything more than a handful of semi-progressive white people being able to feel a little less guilty in the short run while all of the structures that continue to oppress the descendants of our enslaved ancestors march happily along, maintaining the white supremacy-mandated status quo.

A genuine conversation about repairing the breach or reparations, as we have come to speak about it, demands a willingness to entertain that there has to be deep systemic changes in the way that all our systems are structured. White people who think that they are ready to engage in this conversation with the hope of moving on to actually doing the work required to make changes, need to be willing to see the world in a new way. We cannot tidy up the current oppressive systems and allocate a few dollars to build some structure of tribute to an African American or offer a few scholarships to a handful of enslaved persons’ descendants as a part of the tidying-up effort. While these efforts can be a sign of good intentions, if paired with genuine actions to make the needed systemic changes in the country, generally they are not paired in that way, thus becoming more like clanging symbols making false sounds about repairing the breach while they are left as stand-alone actions.

Genuine and sustainable reparations work will call upon white people who have begun to awake to the world that was created for them by stolen labor, to begin to destabilize all of the systems in this land that prevent everyone, and especially people of African descent, from having equal access to everything that they are enjoying. This country needs a new way to be. The Covid-19 pandemic is making that crystal clear to anyone who did not see it before. There is so much verification of the health, education and economic inequalities – and the most astounding one is in the discrepancy in the death rates between whites, African Americans and other people of color.

On the other hand, it has become quite clear to most of us that one of the reasons there is such a cavalier attitude about rebooting the country and asserting that another 50 or 60 thousand deaths is just the price that we have to pay for the sake of the economy, actually lies in the fact that a large percentage of those who die will be people of color and the elderly. These two groups are expendable.

Thus progressive whites who wish to come to terms with what a society that is honest about doing reparations has to do, must be willing to understand that such a society will have no persons who are deemed expendable. What do we have to do in the United States to change our understanding of having expendable people? This is a question to be deeply pondered by all of us and especially progressive white people in our faith communities.

These days, I find that I am most interested in speaking to people who profess to have faith and an interest in practicing that faith with integrity, because I believe that the honest work of reparations begins with a willingness to take the bold step of accepting that the way of life that we have created in the United States is not going to support honest reparations work. That work requires one to find the courage to ask very hard questions about all facets of our systems while moving into the place of being willing to see them changed.

The conversation on reparations will not be genuine until it begins with expressions of concern for people of African descent, about the ways the United States is going to assure affordable health care, equitable education, affordable housing, living wages, access to transportation, safe neighborhoods which are free from state supported violence against our black bodies. And they must have all of the other necessities needed to live fully into God's intention for them. Until we begin this conversation with the intent to build a new world, where justice and love prevail, we are playing a strange and tiring game. Hopefully, folks who have faith are not really interested in living a lie and would like to do this work for real. It remains to be seen.

But until we make a world where the descendants of the enslaved persons stolen from their African homes can live as free people in the United States, with clearly stated systems that affirm their personhood and do not deem any of them expendable, no work toward reparations will be adequate. Everything short of a new way to see and to act, grounded in justice and love, is simply a small step toward trying to find the right path. A path that will bring rejoicing to the heart of God when we find it and truly embark upon it.

Catherine Meeks, PhD, is the Founding Executive Director of the Absalom Jones Episcopal Center for Racial Healing, as well as the retired Clara Carter Acree Distinguished Professor of Socio-cultural Studies and Sociology from Wesleyan College. She has published seven books, including Passionate for Justice, Ida B. Wells – A Prophet for Our Times (September 2019), which she co-authored, and Living Into God's Dream: Dismantling Racism in America (2016), which she edited and which focuses on racial healing and reconciliation. Catherine is a regular contributor to Hospitality, which is published monthly by the Open Door Community. She is involved with prison work and faithfully visits a person who was formerly on death row. She is committed to working for the abolition of the death penalty, writing and helping to create spaces where transformation and rebirth can occur. 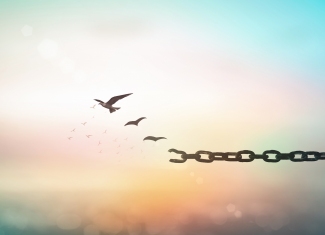