America, Why Can’t You Stop Killing Us

The day after George Floyd was murdered by four Minnesota police officers, I posted this question on Facebook: “America: why can’t you stop killing us?” I thought it was rhetorical. It was not.

Two days later, America reached the tragic summit of 100,000 dead due to the COVID-19 pandemic – disproportionately black, brown and native people who lack access to adequate health care, information or protective equipment, made more vulnerable because their largely invisible, overwhelmingly underpaid work has been deemed “essential.” Again, I had to wonder: “America, why can’t you stop killing us?”

That weekend I put on my facemask and clergy collar, and took to the streets with protesters here in New York. We called their names: George Floyd, Breonna Taylor (killed by Louisville police in March), Ahmaud Arbery (killed by white vigilantes in February in Georgia), and too many more. We chanted “I can’t breathe” and “No justice, no peace” till our throats were raw. Within my soul, a different by now familiar chant rose: “America, America. Why can’t you stop killing us?”

The accumulated evidence suggests America is nearly incapable of allowing people of color as a group to thrive. Our nation is sick, addicted to the diminishment, elimination and control of Black, Latino, Native and Asian lives … whatever is necessary to ensure the flourishing of White people and culture. Our bodies and lives are the fuel that keeps the white machine humming. While much has evolved in American life, this – what Jim Wallis calls “America’s original sin” – has not.

The path to beloved community begins with truth-telling

I pray these words do not plunge anyone into shame or despair. We cannot afford that luxury. For me, truth-telling like this is a step on the path to liberation and faithful action for those who love and follow Jesus.

We dream of communities where all people may experience dignity and abundant life and see themselves and others as beloved children of God. We pray for communities that labor so that the flourishing of every person (and all creation) is seen as the hope of each person.…. It’s a vision of a world where oppressed people are liberated from oppression, and oppressors are liberated from their need to oppress (p. 15).

We will not see that vision realized in our lifetime, but we can commit to the life-giving journey. Along the way, we work through four areas of action (or “quadrants”). We gather with neighbors and partner institutions to cast a shared vision of the community we long to become and commit together to make it real (what the BBC vision outlines as “Proclaim the Dream of Beloved Community”). We learn, pray and share stories in order to grow as healers and reconcilers (that is, “Practice Jesus’s Way of Love”). We take up the work of transforming and repairing systems that most harm people of color (that is, “Repairing the Breach”).

Systemic Racism is not an accident

But the journey usually starts with quadrant 1: “Telling the Truth” about our churches and about our society. This truth is apparent across every sector of American life. People of color suffer police brutality and mass incarceration, economic deprivation, chronic unemployment, discrimination in hiring and promotion, inadequate education, crumbling public housing, discriminatory banking policies, defunded public health systems, environmental devastation in our backyards, systematic destruction of our thriving neighborhoods, second-class citizenship in many churches and dioceses and so much more.

The above system is too comprehensive to be an accident or even the result of “disadvantage” or “underprivilege.” It is diabolically systematic and has Christian fingerprints all over it. Starting in 1452, with a set of papal decrees known as the Doctrine of Discovery, the Church sanctioned and unleashed terror on non-European lands and peoples, who were conveniently not deemed fully human.

Since colonists arrived on these shores, laws and customs have ensured European-descended men of a certain class receive the first fruits. The rest slowly trickles down like a poorly terraced slope of farmland. This system continues today as originally designed, still creating an undernourished group at the bottom whose underpaid (or unpaid) labor and disproportionate suffering make life possible for the rest.

This means contemporary racism is not some aberrant relic on the margin of American society. The American way of life has always depended on the deprivation, elimination and/or control of entire groups of people, and race has consistently been the most important factor in selecting these groups. Once chosen, your group only matters insofar as you are useful to the ultimate project: a thriving white nation. If you are no longer useful to that project, or you threaten it in any way, your group must be imprisoned, deported, relocated, eliminated or otherwise diminished.

Truths that pierce the heart

I have known this for decades, but the truth pierced me at a deeper level during two recent trips. In October 2019, I accompanied the Executive Council of the Episcopal Church for its meeting in Montgomery, Alabama. We made pilgrimage to the Equal Justice Initiative and its national memorial to victims of racial terror lynching.

Standing outside, you look downhill at 800 ceiling-mounted monuments, each inscribed with the names of people who died in racial terror incidents. The boxes could be coffins. They could also be bodies suspended in the air.

Indeed, the museum curators intentionally position you on this hill so you feel like a spectator at a lynching. Guides will tell you about how – less than 100 years ago – church bulletins published the time and place of the day’s lynching, so members could take a picnic basket after worship, watch the event, and make a day of it. Far from a horror, lynching was a popular pastime for good, white Christians.

Within three weeks of that visit, I was on a plane bound for Liverpool, England. The city is known as the Capital of the Transatlantic Slave Trade, which makes it the perfect home for the International Slavery Museum. A quote on one wall at the museum told me everything I needed to know:

Local labour was scarce because millions of indigenous peoples had died after the colonization of their lands by Europeans. Many were killed in battle and others were worked to death, especially in the mines. European diseases wiped out huge numbers more. So European colonists looked to the continent of Africa for a new supply of labour.

“Africans are the ideal people for the work here, in contrast to the natives, who are so feeble.” – Alonzo Zuazo, Spanish judge, 1518

A nation and identity built on racial hierarchy

The implications of those words nearly brought me to my knees. Zuazo might as well have said: “We Europeans need tools to work this land. The natives are too feeble and die too quickly. How inconvenient! Those sturdy African animals are better suited to this task. Bring a steady supply now.”

Why can’t America stop killing us? The white national project needs us to serve as the disposable tools and fuel that make it work. The system breaks down if people of color step into our full humanity and citizenship. State-sanctioned racial terror – lynching, but also as native slaughter and relocation, chattel slavery, Japanese internment camps, Jim Crow laws, mass incarceration, the War on Drugs, post 9/11 Islamophobia, immigrant detention and deportation – is inevitable, if you have to maintain the racial hierarchy on which the nation and white identity are built.

America has economically and politically thrived thanks to this system. So has the Episcopal Church, the Christian community built to serve and sanctify a white empire.

I am in tears even as I write these words. But I know it is good – good that the nation and church gird ourselves with God’s grace and tell these deeper truths. Good that we lament and repent, even if it dismantles much of what we have understood about ourselves. A house built on sand cannot stand forever. A nation and church built on racial supremacy cannot and should not, either.

I dream of the day – and it may be coming – when the people of God lead the way and speak truth about who we have been and who we are, and prayerfully discern together who we want to become … as a nation and as a church.

If we are to become a Beloved Community, it will not be enough to be good individuals or even warm and welcoming churches. It will not be enough to speak of white privilege or to cheer at the presence of leaders of color in our midst. We will need to individually and corporately live into the pledge we’ve made as the Episcopal branch of the Jesus Movement: repent of the evil that enslaves us, the evil we have done and the evil done on our behalf.

We will need to understand the white supremacy project at the core of our institutional identity, and actively dismantle and subvert it. Otherwise it will only reinvent and reassert itself, as it has for the entirety of American history. We will need to dedicate our hands, hearts and money to stopping America’s insatiable consumption of the bodies and lives of Black, Latinx, Native and Asian people. We will have to cast our lot with God’s dream of Beloved Community, and learn to selflessly commit to each other’s good.

How will we seek justice and flourishing with all God’s people, especially the ones whose suffering and diminishment made our national and ecclesial prosperity possible? There is no single answer. A good starting place is “Becoming Beloved Community Where You Are” (a resource for individuals, congregations and communities) or “Learn, Pray, Act: Resources for Responding to Racist Violence” – both on www.episcopalchurch.org. You will discover many more possibilities in this issue of Vital Practices.

However you walk, please stay close to Jesus and deeply committed to sharing in his Way of Love. Turn and confess regularly to God, and learn Jesus’s unselfish ways from scripture. Pray and worship with your whole heart, and be zealous in blessing others and giving yourself away for love. Go across borders to join God’s restoration and healing project. And rest, trusting that God’s power, not our own, will bring the dream of Beloved Community to full flower.

In Jesus, God has told us and shown us what is good. It is never, ever too late to speak what is true, turn from systems of death and pursue the path of love.

The Reverend Canon Stephanie Spellers serves as the Presiding Bishop’s Canon for Evangelism, Reconciliation and Creation, helping Episcopalians to follow Jesus’ Way of Love and to grow loving, life-giving and liberating relationships with God, each other and the earth. The author of Radical Welcome: Embracing God, The Other and the Spirit of Transformation – as well as The Episcopal Way and Companions on the Episcopal Way (with Eric Law) – she has directed mission and evangelism work at General Theological Seminary and served as a canon in the Diocese of Long Island; founded The Crossing, a ground-breaking church within St. Paul’s Cathedral in Boston; and led numerous church-wide renewal efforts. A native of Frankfort, Kentucky, and a graduate of both Episcopal Divinity School and Harvard Divinity School, she makes her home today in New York's Harlem neighborhood. 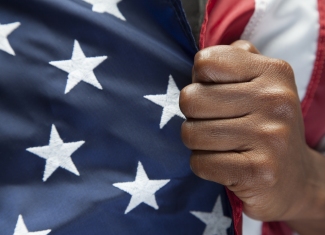