It feels odd to be writing about racism in this moment, because I read, think and write about racism all the time. Many people have made sophisticated arguments about resisting the twin pandemics of COVID-19 along with systemic racism and police violence. So what can I add? In this moment, I want to invite people to consider moving from a public performance of outrage to real, sustained engagement with systemic racism. And I want to describe my personal commitment to the Black Lives Matter movement.

When the COVID crisis started to shut things down on a larger scale in the United States, I was visiting my daughter in Hawai’i for spring break. We stayed in our hotel room, practiced social distancing when we were in public and watched as Hawai’ian protestors drove through the streets holding signs and telling tourists to go home and take the virus with them. As one of those mainland tourists, I got it. They were right. I flew home and began sheltering in place.

On the plane to fly home, I was in a window seat with an empty middle seat and a white woman on the aisle. I offered her an antibacterial wipe when she sat down, and she jumped up into the aisle and said “I don’t think so.” As the flight went on, I felt her antipathy rising. Every time I cleared my throat, she would jump into the aisle, whisper to her travel companion and give me dirty looks. At that point, I was thinking to myself, “if you don’t like Asian people, why the hell did you go to Hawai’i?” I came home to articles about Asian people being beaten and blamed for coronavirus, including a story about someone knifing a father and two young children, and someone throwing acid on an Asian woman as she was returning home.

Asian Americans were writing about anti-Asian racism and violence, including previously reserved celebrities, who urged us to abandon the model minority myth and stand up for our full personhood. I saw public discussion of the “perpetual foreigner” racialization of Asian and Latinx folks that results in additional screenings by TSA and comments like “your English is real good.” I struggled with the fact that to wear a mask marked me as a “disease bearer” and not wearing a mask marked me as an “irresponsible disease bearer.” I remembered the comedian Margaret Cho describing SARS as Severe Asian Racism Syndrome, and I laughed even as I worried every time I went out to buy groceries. At the same time, I was hesitant to make myself or other Asian people a central focus because of the deaths of Ahmaud Arbery, Breonna Taylor, and countless others. I was getting dirty looks. Black people were dying.

And then on May 26th I woke up to footage of a white police officer killing George Floyd.

As a new Minnesotan, I did not join the protests, because I did not have ties in the community and because my asthma puts me at greater risk for complications from COVID. I participated in online prayer services, researched which community organizations had been engaged in improving police/neighborhood relations and donated to a variety of community organizations and GoFundMe campaigns. I had seen what had happened in other places like Ferguson, Missouri, after the death of Michael Brown and the Standing Rock reservation with the No DAPL (Dakota Access Pipeline) movement, and I did not want to be one of those outsiders coming in, failing to listen and telling everybody else what to do.

I had the strong feeling that the Twin Cities would be gearing up for at least two years of protests and community action that would happen in waves. Would the police officers be arrested? They were. Would they be charged appropriately? That may still be in process. Would the trial be moved to a more rural location if the officers’ attorneys could argue that they couldn’t get a fair trial in the Twin Cities? We don’t know yet. And finally, would the officers be acquitted? Because that’s how systemic racism in policing usually works – officers make a claim that they feared for their lives and so deadly force was necessary. Ask the families of way too many Black and Brown people who have been murdered by law enforcement whether the criminal justice system works for them.

I hope that justice prevails for George Floyd, but I am not optimistic. One white progressive on social media called me out for anticipating a “not-guilty” verdict, saying that I was a distraction and that I was not allowing for hope and empowerment. (In other words, now that she is on board, justice WILL be done.) Another white church member who proclaimed that she had been doing racial justice work “for almost two years now” flamed me on social media for not being angry at white people and telling them to be anti-racist, as she had been doing. (How’s that working for you so far?) Other people were engaging in a kind of performance of their identity as “not racist” by saying things like “I am so sorry for what you’re going through” (are you kidding me? I’m still alive) and taking selfies of themselves at Black Lives Matter rallies (because it’s all about white protestors) to show me how much they supported “the cause.” Others even sent me a reading list (because I’ve been doing this work my whole life but I need some white folks who read three books to give me the one magical book that will just make racism go away).

Do you know where I’ve landed with all of this? Firmly in a humble, listening and learning space with the Black Lives Matter movement. I am part of a racial justice group online where the leaders have told anyone who isn’t Black to shut up, sit down, listen and learn and let Black women lead. I’m good with that. And I have watched as white progressives who identify as perfectly woke allies (because they can talk about white fragility) re-center themselves in those places because “it’s really important for white people to speak to white people.” To my amusement, those folks usually get kicked out of the group. But their message, framed in good intentions and their performance of wokeness, has the embedded assumption that white people don’t have to listen to people of color, so you know, move aside people of color and let the white folks save us. Because that’s working so well.

In for the long haul

Yes, I feel it very strongly when Asian people are attacked, because I know that I could be next. AND I also felt it strongly when George Floyd was killed, and when Iyanna Dior, a Black trans woman, was beaten by a group of 30 cis men (who identify with their birth gender) during the protests in Minneapolis. As a person of faith, I have prayed for the families of the law enforcement officers that have received death threats, because I don’t want them to die by violence either. And I feel incredible frustration when people who claim to care about disrupting systemic racism and white supremacy spend more time and energy shaming other people for “not doing it right” than actually building the relationships and capacities they will need to stay in this work for the long haul.

In this moment, I invite all of my siblings in Christ to pray and deeply discern how they will sustainably work to disrupt systemic racism and white supremacy. Those pandemics won’t disappear if the officer who killed George Floyd is convicted and sent to prison. I fear that many of the folks who are publicly performing their “outrage” will.

Heidi J. Kim is an educator and Episcopalian living in Minneapolis, MN. She currently serves as the Director of the Melrose Family Center for Servant Leadership at the Breck School. She previously served as the racial reconciliation officer for The Episcopal Church, listening and learning with Episcopalians and Anglicans throughout the church. Heidi’s experience in church-wide ministry, as well as in higher and secondary education, has focused on the stories of the survivors and disrupters of oppression and marginalization, as well as the struggles of well-intentioned people to speak about volatile issues without endangering relationships with family, friends and community. She holds a deep commitment to working with curious, diligent and passionate people of faith to maintain stronger and more faithful communities. 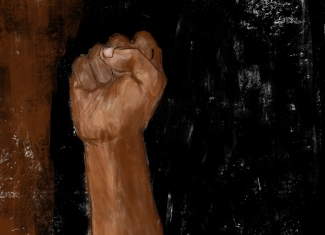