January 2021
Being Church In A Pandemic

Editor’s note: This article is adapted from We Shall Be Changed: Questions for a Post-Pandemic Church, edited by Mark D. W. Edington and published by Church Publishing. The book gathers brief essays from thought leaders around the church that address pressing topics the church needs to consider in preparation for the end of this pandemic.

An economic tragedy is unfolding across the United States. On November 19th, the New York Times reported that unemployment claims are rising again and that an estimated 7.9 million people are on the verge of losing Pandemic Unemployment Assistance. The Pew Research Center has found that the sudden loss of jobs is especially hitting lower-income communities of color. In New York, the city where I live, soup kitchens and food banks are now reporting record numbers; a volunteer at just one site in the Bronx shared that 1,000 people had showed up one weekend, and then 700 for two weekends in a row. There are profound disparities in terms of who is bearing the brunt of the economic fallout of COVID-19, and such differences are reflected in our congregations.

Amidst all this, Bishop Mark Edington and Church Publishing asked me to reflect on what COVID-19 is revealing about the financial structures and sustainability of congregations and adjudicatories in the Episcopal Church. This was for his recently-published book We Shall Be Changed: Questions for a Post-Pandemic Church, now available through Church Publishing. More specifically, I was to reply to the provocative question of “Is self-help the only option?”

“Self-help” is the opposite of a faithful approach in times like these. Episcopalians are the inheritors of examples from the first to fourth centuries wherein Christians saw themselves as one part of a larger church body, and pulled together to aid the hardest-hit assemblies and individuals in their communities during times of disaster.

Rather than self-help and financial isolation, it is financial interconnectedness that is in our DNA.

In his letters from the middle of the first century, Paul makes multiple references to a Jerusalem Collection.[1] “At present, however, I am going to Jerusalem in a ministry to the saints; for Macedonia and Achaia have been pleased to share their resources with the poor among the saints at Jerusalem.”[2] This collection is understood to have been both an expression of unity among the first century assemblies and as a concrete way of helping the ‘poor among the saints’ of the Jerusalem assembly who were experiencing famine and food shortages at that time.

In every diocese, there are congregations that are being especially devastated by infection, mortality and unemployment. Within New York, Episcopal churches in the Bronx have been particularly hard hit. In addition to emergency relief grants, what would it look like for a diocesan-wide Jerusalem Collection to support the ‘poor among the saints of the Bronx’? The Navajo Nation is eclipsing other states’ infection rates and mortality. The partnership between Navajoland and the Diocese of Northern Michigan to establish the COVID-19 Fund and Indigi-Aid Telethon echo Paul’s first century collection on behalf of the hungry in Jerusalem. Episcopal Relief and Development has created a COVID-19 Pandemic Response Fund to enable emergency aid to vulnerable communities both in the U.S. and around the world.

Presider as guardian of all in need

While many congregations in our dioceses have been inconvenienced by COVID-19, some congregations have been devastated by this pandemic. Clergy in these communities are on the frontlines of providing monies to parishioners who are struggling to pay rent, buy groceries or avoid reliance on payday loans. We should be unafraid to dust off this tradition of a weekly collection for the poor, and well-resourced parishes can follow the example of churches like the Church of the Heavenly Rest, which created a Fund for the Not Forgotten for those who are ineligible for federal assistance (undocumented immigrants, asylum seekers, workers in the gig economy, the formerly incarcerated). Importantly, a portion of those funds is also going to support congregations in East Harlem.

Bishop as ‘lover of the poor’

One striking development from the fourth century is that of a bishop’s public role as ‘lover of the poor.’[2] Pre-Constantine, aid for the poor had focused primarily on those within the Christian assemblies. One of the earliest post-Constantinian understandings of a bishop’s public role was as one who lifted up the suffering of the poor – both Christian and non-Christian alike – to a public that was reluctant to confront these matters. This new role was particularly embraced by Bishop Basil of Cesarea who, in the wake of a devastating famine in 369 C.E., preached forcefully to the wealthy of the city, laying bare the invisible suffering of the poor in vivid terms.[3] His preaching raised money for a soup kitchen and what is considered one of the first hospitals, the Basiliad.[4]

Even in our secular age, bishops and other prominent faith leaders command attention through their pulpits, pastoral letters, social media, in letters to the editor, and more. Bishop David Bailey of Navajoland recently said that now is the time for faith leaders to make visible the hidden suffering of those rendered invisible, and it’s inspiring to see new bishops like the Rt. Rev. Bonnie Perry of the Diocese of Michigan raising money for food aid as one of the first acts of her episcopate. They stand in a long line of bishops like Basil of Cesarea.

Also in the fourth century, Bishop Ambrose of Milan spoke out forcefully against the money-lenders of his city for predatory lending practices, the charging of exorbitant interest rates on loans to people in desperate situations.[5] Tragically, predatory lending remains with us today, and in 2016 the average interest on a payday loan in South Dakota was 652%. With unemployment now as high as it was in the Great Depression, some in our congregations are looking for ways to make ends meet, and predatory lenders are circling above. What is the church’s role in condemning predatory lending and offering alternatives?

In the wake of the Rodney King riots, Dr. Gloria Brown, the Diocese of Los Angeles and Episcopal Relief & Development established the Episcopal Federal Credit Union to help devastated communities avoid the payday loan and pawn shops that were the only lenders left as major banks abandoned the hardest-hit areas.[6] Nearly thirty years later, this credit union is proving to be a bulwark against the economic impacts of COVID-19. It is still offering low-interest, small loans to struggling families and at the end of March they announced an emergency cash fund for churches whose cash flow has dropped, as well as a 50% reduction in their customary interest rate for congregational loans.

This diocesan credit union brings me to my final point and a deeply-held belief: focusing on economic justice is not only the moral thing to do, it also fosters financial sustainability in the long run.

The Episcopal Church runs the risk of losing our moral calling – our saltiness – if and when our wealthiest churches and dioceses self-isolate and neglect the most vulnerable at this time. Now is the time to be remembering our long history of financial interconnectedness, of building relationships across economic divides, and how time and time again the early church was a ‘guardian to all in need.’

Miguel Escobar is Executive Director of Episcopal Divinity School at Union. There he works with the Dean, Kelly Brown Douglas, in building MDiv and STM in Anglican Studies programs aimed at forming social justice faith leaders in the Anglican tradition. Previously, Miguel served as managing program director for leadership, communications and external affairs at the Episcopal Church Foundation. He earned a master of divinity degree from Union Theological Seminary in 2007 and served as communications assistant to then-Presiding Bishop Katharine Jefferts Schori from 2007 to 2010. Escobar is chair of the board of Forward Movement, a board member of Episcopal Relief & Development and served on the advisory council of Duke Divinity School’s Leadership programs.

[4] Brown, Peter. Poverty & Leadership in the Later Roman Empire. University Press of New England, 2002. Pg 8. I’ve also written about the evolution of ‘bishop as lover of the poor’ on Wealth & Poverty in Christianity here. 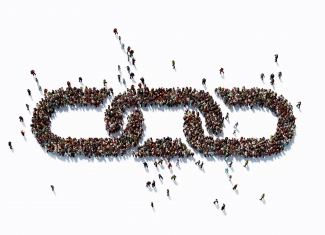