May 2021
The Power of Small Churches

Not Filled Seats but People Served

Yes, average Sunday attendance (ASA) is falling rapidly in all denominations. Yes, that is not good! But – do you notice anything strange about the graphs below? 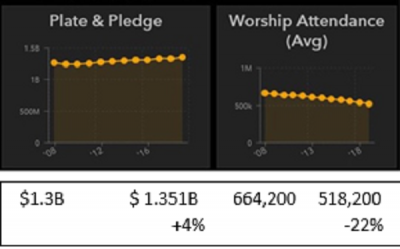 We should always first consider the reliability of the numbers. The financial information is the most accurate. Churches keep good information on their dollars!

The average Sunday attendance is probably reasonably accurate. Most churches make an effort to count every Sunday. The trend line is probably accurate since there are over 6,300 data points, even if the specific number may vary somewhat.

Yet they look really strange!

Why don’t plate, pledge and attendance all move in the same direction?

This has been bothering me for years. I love numbers, and when done honestly, they should present a consistent picture. These graphs do not appear to be consistent. Why would dollars collected be going up when the attendance keeps dropping? (Note: Membership numbers follow a pattern similar to attendance, so add nothing to this discussion.)

If Plate and Pledge (P&P) paralleled attendance, the total for 2019 would be $1.01B, or 33 percent less than it is. To achieve the $1.351B giving in 2018 with 2018 ASA would require donation per average Sunday attendance to jump approximately 33 percent. In my opinion, such a jump is unlikely.

Two explanations for the apparent discrepancy are frequently offered. First, the population is getting older, and older people tend to give more. That may be some of it, but during stewardship campaigns, I regularly heard how retirees were on a fixed income. Some increase is probable but not the magnitude we are seeing.

Second, our older generation is passing on a great deal of wealth when they die. True. However, major bequests almost always are not to the general fund and so are not included in these numbers. In my experience, lesser bequests to the general fund seldom made up even two or three years of lost pledge income from the person who made the bequest.

I believe it would be reasonable to expect all the data patterns to move in the same direction, unless there is a fourth data set — average church attendance patterns — that we are not looking at. Data for this fourth graph is not very solid, so we are working on general patterns, and this analysis should be seen only as a hypothesis worth exploring.

Maybe it’s about changing patterns of church attendance, rather than decline

Most people agree that members now attend less often than they once did. I have seen various numbers, but for the sake of this analysis we will say the average person attended 2.1 times per month ten years ago (25 times per year), and now attends 1.7 times per month (20 times per year). On the surface that does not look like much, but it has a major impact. (Note: After lots of digging I have not found respectable research on ‘times per month’. The numbers I am using are reasonable but only intended to present a theory, not a conclusion.)

If that church follows the general patterns of a 22 percent drop in attendance, that would produce an average Sunday attendance of 78 which equals an annual attendance of 4,056.

True, the number could be somewhat different since we don’t have solid, specific data. But the drop in frequency is well established so the pattern is probable.

Notice how this resolves the apparent discrepancy in the overall statistics. If a person changes from attending 25 times per year (2.1 times a month) to 20 times a year (1.7 per month) they probably will not drop their pledge by an equivalent amount. Increased giving by seniors, and others, could account for the overall increases.
For our national church the 664,200 ASA in 2008 equals 1,382,000 persons. The 518,200 ASA in 2018 equals 1,347,300 persons, a drop of “only” 2.5 percent. In support of this hypothesis is the fact that with the new estimate of persons attending, the average giving only has to increase about 6 percent, which is reasonable. 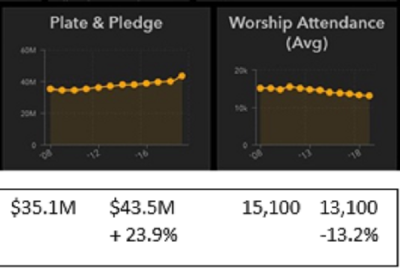 I know, people attend at various rates. The 15,100 ‘filled seats’ on an average Sunday likely consists of around 20,000 individuals.

I also know that 8.4 percent over ten years is not something to widely celebrate. During that same period the state’s population grew by approximately nine percent, so at best we almost kept pace.

Assuming this analysis is correct, I believe its primary message is that we should spend time considering the implications.

1. Stay focused on our calling. We are called to reach everyone, invite new people and share the Gospel. The numbers provide insight and information for conversation, but don’t let the numbers steer you away from our calling. Our challenge, our call, is to help disciples grow – not grow our ASA.

2. What will post-COVID look like? This analysis actually takes us in the direction of considering people served, even electronically, versus ‘filled seats’. COVID’s ‘silver lining’ is that it kicked us out of the tradition of providing services only at specific times and places, forcing us to make it possible for people to participate electronically on their own schedules. I suspect post-COVID attendance will be substantially below pre-COVID attendance, and not exclusively because of disinterest but because of habit changes. (Early information shows about a 40 percent drop in ASA in churches again meeting in person.) If a person finds watching the service on Sunday night or listening while commuting meets their spiritual needs, there will be less need to attend Sunday morning.

4. Flexibility is key. Our tradition of “if you want to worship with us you will come when we tell you and where we tell you” is not realistic if we want to reach people. One study I saw said 1/3 of working Americans now work on weekends at least occasionally. Plus, as the father of three soccer players I can witness to the priority challenges on Sunday mornings during the seasons! Another significant piece to consider is that a large percentage of the people working on weekends are working at low-income jobs. Since many of those are people of color, our tradition of insisting on Sunday worship may be excluding people. In what ways are we reimagining Sunday worship to exist outside of Sunday mornings? A suggestion I have is to begin counting attendance at non-Sunday services. If our evaluation, including attendance, focused more on non-Sunday services, I would expect changes that could incorporate more people.

Churches might find it helpful to deeply investigate the reasons for the reduction in attendance frequency. A nationally funded, professional study of 100 congregations is likely to find some useful patterns. That information might be used to help shape discipleship efforts as well as outreach to non-members.

The ASA plummet is important and says something – but maybe the message is more complicated than we thought.

The Rev. Ken Kroohs is a retired third-career priest, with an MDiv from Duke University and an Anglican year at Virginia Theological Seminary. He began his professional life as a civil engineer and then a city planner. Those experiences shape his understanding of societal behavior patterns. Mr. Kroohs served two small churches in the Diocese of North Carolina, plus an intentional interim in another one. His three daughters, eight grandchildren, 90-year-old house and wife who loves HGTV – in addition to his assistance with churches seeking to grow –all keep him busy. 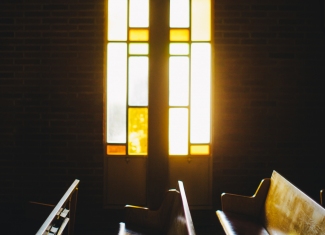