When I was becoming sober-curious (that is, beginning to interrogate my relationship with alcohol, wondering if it was serving me) one of my big, terrifying fears was that I wouldn’t be fun anymore. As a child, I watched a wide range of television and fell in love with Saturday Night Live and Late Night with Conan O’Brien before anyone around me could catch the references. I would quote skits and reenact them around the house, so much so, that my mom thought I would one day become a comedian. I wanted, maybe more than anything, a reason to laugh, and that desire to be fun – for the sake of others as well as my soul – became primary to my identity.

When I started drinking, I bought the lie from alcohol advertisements that drinking is cool, sexy and (most important to the deeper part of my soul) something that made life fun. Something that made me fun. Something that would soften my edges so that I, with my absurdist wit and quirky sensibilities, might become palatable to the world and maybe even to myself. Subconsciously, I wanted to believe alcohol could make me cool, sexy and fun (especially after a lifetime of only really nailing “fun” on the list). The idea that getting sober might rob me of the “fun” part of myself that felt as precious to me as my priesthood, kept me drinking long past when I wanted to quit. For years, sobriety felt in opposition to my identity. I didn’t know how to bridge the gap between the self I thought required alcohol and the self I hoped might lie on the other side of quitting drinking.

The irony of this is that I wasn’t very happy. I was holding onto alcohol, as if it were the source of my joy, while wrestling with the fact that I desperately wanted more joy and constantly wondered if I was as happy as I could be. A pervasive question was, Is this as good as it gets? I couldn’t see it at the time, but in my white-knuckle hold on alcohol to try to preserve my happiness, I was clinging to the very source of the void of joy that led to my desperation. Drinking made joy feel elusive, and part of the greater lie was that alcohol was the only way I’d be able to find it.

When I finally took the plunge and quit drinking, it was because I had forced myself to a conclusion I hated but thought inevitable – a truce with myself that meant giving up the social part of me, the part that wanted more than anything to make people laugh. I assumed that I would have to lose something I had fostered all my life. I didn’t see any option except to trade in my fun spirit for a sort of spinsterhood that would make me loathsome at night but clear-headed in the morning. It was a necessary trade, worth the barter, but grievous nonetheless.

Life on an abandoned island

Because I was getting sober almost entirely in secret, one of the rough parts was that I assumed no one else had ever felt this way. Every part of my sober discernment felt like living on an abandoned island. Losing the social aspect of alcohol was the hardest hurdle, because I pictured myself befriending volleyballs, ala Tom Hanks in Cast Away. This overwhelming loneliness meant that I would often manage a few days of not drinking and go right back to it when someone invited me to go out for drinks. I knew I wanted to drink differently, but when I got those invitations it felt like my only choice was to drink pitchers at a bar or befriend volleyballs. I just couldn’t do it.

While I struggled as if I were the only person who had ever been afraid that sobriety would end her fun, it is actually extremely common. It’s so common, that as a recovery coach, I spend lots of time helping people overcome it. The only way I know to do that is to first name it as common, and then explain how my fears did not come true when I finally quit. I did not befriend volleyballs – I don’t even have one in my home. I found, instead, that sobriety offered me an incredible, palpable joy that far surpasses the joy I had nurtured through the groggy heart of drinking.

When I quit, I did not sacrifice any of my joy, and I believe my fun spirit has multiplied tenfold. I continue to be the social person I always was, but now driven solely by the gifts of joy, vulnerability and courage. I don’t stay out as late as I used to, but that’s simply because I want to go home. It was only through the clarity of sobriety that I could see that if I hadn’t been so drunk previously, I might have picked up on my body’s cues to go home and rest, cues that I now take seriously because they mean that I wake up refreshed and joyful.

Giving up the old self to welcome the new

Sobriety opened my heart to dimensions that were previously locked down by the depression brought on from drinking a depressant daily. I didn’t mean to put Chardonnay padlocks on parts of myself, but I did. Sure, I was “fun,” but the fun I engaged was sometimes forgotten by the morning – and you can’t tell me I was nailing any punchlines with slurred speech. My relationship with joy now is defined by exploring what all the different parts of my heart hold for me. I am still learning that many of them hold ways to participate in joy that were previously withheld by the effects of alcohol on my life.

To reconnect to my joy through sobriety, I had to first be willing to look into my own self with a clarity I hadn’t had for ten years. That willingness makes us deeply vulnerable, and I think that this fear of what we might find if we begin to truly know ourselves, is hidden in the roadblock that looks like not wanting to quit drinking because we might not be fun.

Maybe some of us don’t fear losing fun in sobriety, but fear the loss of the false visions of ourselves that we have protected. Maybe the fear is that to live inside our true identities, we have to lose an old self to welcome the new, one that we grieve even when its death promises the resurrection of our true selves.
What I found in sobriety is that I had to do that terrifying work of giving up my old self to welcome the new, but the gospel that I believe shapes every facet of my life did not forsake me. The death of my old self promised the birth of my new self, and even with all the grief, I know I am now living fully inside my resurrection.

The Rev. Erin Jean Warde (she/her) is an Episcopal priest, spiritual director, recovery coach and writer. She is the author of Awakening in Sobriety with Brazos Press (coming out April 2023). She is the founder of Discerning Sobriety, a course and upcoming community that helps people integrate spirituality and discernment practices into their relationship with alcohol. You can learn more about Discerning Sobriety and take the course via www.discerningsobriety.com. She offers recovery coaching for people who either want to quit drinking or who want to change their relationship with alcohol in any way. You can access resources, sign up for her newsletter, and work with her as a recovery coach or spiritual director via her website: www.erinjeanwarde.com. 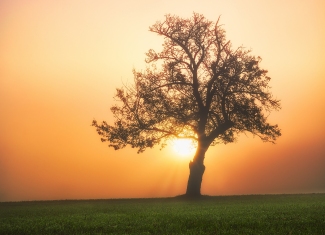