The Messy Business of Being White

COVID-19 had already turned the world on its head when I agreed to contribute from a white person’s perspective to this issue of ECF Vestry Papers, but things seemed to be moving at about the usual pace in terms of the long-term struggle to challenge racism and undermine white supremacy. Then George Floyd was killed on May 25, and now June 2020 is happening. It feels like quite a moment to try to say something helpful about race. There are lots of voices talking about this moment, and I’m not sure that I have much to add.

So I’m going to try to say more or less what I planned to say way back in early May. I’m going to start by telling a few bits of my own story through the lens of race, something that white people are often not encouraged to do. Then I’m going to talk about the long haul, about practices that have nourished me in the lifelong work of repenting for and standing against racism and white supremacy, in the messy business of being white in diverse community and trying to be responsible and faithful in my relationships.

When I was in second grade in 1977, the Seattle public schools embarked on a large-scale busing program to head off a federal desegregation order. Overnight, my primarily white and Asian American K-5 elementary school became a K-2 school where half the kids were bussed from a nearly all Black school across town. Many things changed at my school that year – including my getting a bonus year to be one of the “big kids” – but one of the most noticeable was a confusing shift in tone.

Familiar adults who had always seemed to be firmly in charge were suddenly anxious and focused on punishment and control. Getting sent to the office the year before would have gotten you a talking to. Now there was a wooden paddle in the office, and my previously cheery music teacher was talking about how thick it was and how much it would hurt to be hit with it. Even then, I sort of knew that she wasn’t talking to me or the other neighborhood kids. The grown-ups were afraid of the new kids. The Black kids who came on the bus. The oldest of whom were second-graders.

One thing that happened that year was that in the evenings, my classmates who rode the bus started calling my house and asking to speak with me. I wasn’t all that socially competent, plus I was seven, so I was mostly impressed by the confidence and sophistication of these little girls who picked up the buzz book and made their own phone calls. I talked with whoever called, but I didn’t call people back. I didn’t invite anyone to my house to play. I just took the phone call situation as one of the many mysteries in that year of change.

Another thing happened later in the year: in a moment of bravado with a classmate who was getting on my nerves, I said, “I’m going to kick your butt at recess.” That Black second grade boy looked at me, surprised at first, then shook his head like a tired man many years my senior. “No you aren’t. Stop talking about that.” Given how little I knew about butt-kicking, I knew even then he wasn’t afraid of getting beat. I didn’t understand that he already knew about a power I didn’t yet know I had. He knew that Black boys who fight white girls always lose.

After second grade, my family moved away from Seattle. Most of my school years were spent in schools where a majority of students were Black. I learned about white flight by watching classmates from my all white neighborhood peel off into the private school system when our majority white elementary school fed into schools that reflected the wider demographics of our mostly Black district. I learned many different coded ways to talk about race in terms of cultural and socioeconomic differences. I learned about tracking; in a high school that was about 85% Black, there was not a single Black student in my AP English class. I learned that even when whites are a minority – heck, even when I was the only white person in the room – the whole system bent over backwards to look out for my comfort and well-being.

Whether I wanted it or not, I had the backing of a world of adults who were louder, wealthier and better connected to power than my Black peers’ parents or my Black teachers. Most of the time, just the unspoken threat of their intervention was enough to keep things going my way.

These are spiritual practices, not necessarily in the traditional sense of the term, but in the sense that evil is a powerful spiritual force and resisting it is real spiritual work.

• Resist segregation. My childhood bounced in and out of segregated spaces. Adulthood has offered continuous opportunities to retreat into white spaces, temporarily or forever. I try really hard just not to do it. I don’t live in overwhelmingly white neighborhoods. I don’t send my kids to majority white schools. I don’t work in or join overwhelmingly white churches or organizations. I don’t sit at all white tables.

I also talk about race because it can give other people permission to talk about race with me. I know that my presence inevitably changes any conversation among people of color, who in my experience are pretty likely to talk openly about race with one another. I don’t want people to shut up the minute I walk into the room lest I become uncomfortable, nor do I want there to be a huge no-go zone in the middle of my relationships. I talk about my own experience and observations about race because I want people with whom I share work and living space and organizational space and friendship to feel fully human and able to share the experiences and observations of their lives when they are with me.

• Try to learn another language. Learning to speak Spanish well has opened the door to relationships, work opportunities, a lot of extra fun and love and some hopefully helpful contributions to people’s lives and struggles. But I don’t name this as a practice because it is rewarding. It’s worth pointing out that learning other languages in the U.S. is rarely very well-rewarded for anyone who isn’t white and a native speaker of English. My language learning failures (oh, Korean…) may have taught me more than my one big success.

Being a language learner is humbling. We stumble and struggle to communicate when communication is vital to dominance and power. Trying to learn another language reveals that languages are hard to learn, a fact that many people in the U.S. have stunning difficulty comprehending. Learning a more internally consistent language reveals what a difficult language English is to learn and the vast injustice of it becoming the power language of our world. And as someone who has only learned language while white, I find plenty to reflect on in the difference between people’s generosity with my attempts at language and the cruelty I see inflicted on anyone whose English is not perfectly white and “standard” in its accent or grammar.

• Make room at the table. I have a seat at the table. I’m a white woman with an elite college degree, a fancy vocabulary and twenty years of ordination in a small but well-connected church. I have a strong if somewhat non-traditional resumé and a reputation for speaking my mind and holding my ground. I am almost fifty, so I’m solidly in the phase of life where I have the opportunity to invite others to the table and help them get settled. I pay attention to inviting people who are underrepresented at the table and try to balance supporting their presence and getting out of their way.

It’s not a sacrificial practice. I invite smart, interesting people who are fun to have a meal with. One of the ways I support them is by naming aggressions against their presence that I observe. I don’t see everything by a long shot, but I see enough to open the conversation, and in some situations that has made it possible to be an ally.

Aside on the terminology here: I just listened to a panel of Black speakers where nearly every person was brought to tears recounting what they identified as “microagressions,” leaving me unsure about whether there is anything micro about what still makes you cry decades later, and entirely sure that I will not be the one to label someone else’s aggressions micro. Many things that don’t kill us don’t make us stronger. They hurt and keep hurting.

• Make room for grown-ups to do grown-up work. I learned many things from growing up with diverse peers. But kids learn an awful lot about how to be the adults they will be for most of their lives from...adults. Kids need adults who will both tell them the truth and do their best to keep them safe while they learn hard things. They need teachers and coaches and mentors who look like them and not like them, who can speak to them from many angles and be trusted to prepare them to live in this broken world. They need adults who have enough breathing room in their own lives and jobs to allow them to tell the truth without being punished for it, even when the truth is surprising or uncomfortable. Kids need to know that adults from their own communities and identities have authority and integrity and that so do adults from other communities and identities.

We owe that to all our kids. Kids can do amazing things, but they can’t raise each other because that is an adult job. Even more important than my own role in raising my kids and the kids of my communities, I pay attention to making space for other adults to fill out the picture.

• Shut up and step back. I’ve put this at the end because it’s not necessarily a practice I can claim, but one that I am beginning to explore more seriously. It’s mostly in the form of questions. Can I let something go unsaid even when I’m convinced it is a brilliant contribution to the conversation? Can I let go of leadership paths that may be open to me, because there is only so much room at that table and taking a chair might mean someone else doesn’t get one? Can I do more behind-the-scenes work so that my colleagues of color have the resources they need to shape the agenda? Ask me how it’s going in five years.

Anna Olson is an Episcopal priest, canonically resident in the Diocese of Los Ángeles, where she spent twenty years in urban parish ministry. She currently lives in the Maryland suburbs of Washington, D.C., and works as Director of External Relations for Cristosal, a human rights organization based in El Salvador, Guatemala and Honduras. She is the author of Claiming Resurrection in the Dying Church (Westminster John Knox Press, 2016). 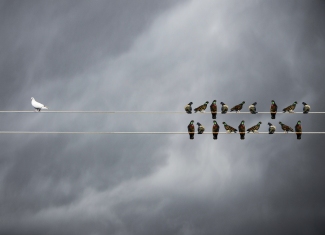