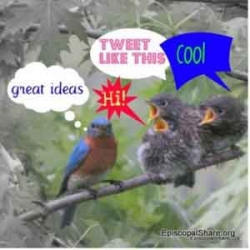 Are you looking for a place to ask questions about best practices for using social media for your church? There are several places were church social media experts, veterans, and rookies gather online to share advice, discuss the latest tech news, and more. Here are some of my favorite places to chat with other Episcopalians and ecumenical groups.

There is a weekly church social media (#ChSocM) tweetchat on Tuesday nights at 9 pm ET. You can follow along with the live chat, or read the summary on the #ChSocM blog. I use the twitter website search for all posts under #ChSocM to follow the chat, but there are other websites such as Twubs designed for following tweetchats. You can also follow the group on Twitter, @ChSocM, and the group founder, author Meredith Gould,@MeredithGould. The group is ecumenical, so you will hear opinions from a wide range of churches.

Every time I follow along with the chat or participate, I learn several new things about church social media. Last week, the topic of discussion was our favorite social media platforms and QR codes. After the discussion, I was motivated to re-join Pinterest and try Google+ again. This week, we discussed privacy and getting permission to post photos. Also, people post news and ideas throughout the week with tweets including the #ChSocM hashtag.

If you are looking for a discussion that is more focused on communication issues in the Episcopal Church, join this open group:

Nope, it’s populated with lots of tech geeks, social media gurus, photographers, and the Dalai Lama. A nice mix if you ask me.

Here are three groups I recently joined to discuss social media and the Episcopal Church.

Information from the About section: “One community in which laity and clergy throughout the Episcopal Church can engage in dialogue and connect. “

Social Media in the Church

Information from the About section: “This is a community of people who are doing social media in their church. I’m of the opinion that churches need to do social media a little different. What do you think?”

Information from the About section: “This is a group to discuss technology in the broadest sense including church IT, mobile, social media, web, blogging.”

Information from the About section: “A meeting place for those who work or volunteer in Catholic new media and technology or are interested. We’re ecumenical too: We accept Mac and Windows (and Linux), iOS and Android (and Windows Phone).”

Are you a member of any other online discussion group related to church social media?