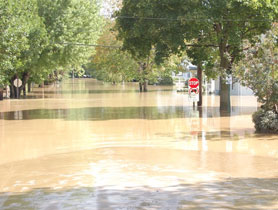 September is National Disaster Preparedness Month. Episcopal Relief & Development’s US Disaster Program equips Episcopal dioceses in the United States to prepare for local disasters, mitigate their impact and help the vulnerable make a full and sustained recovery. This is the first in a series of four posts on parish disaster preparedness planning.

When Janine Ungvarsky and John Major train parishes in the Episcopal Diocese of Bethlehem in how to prepare for and respond to disasters, they begin by explaining how unprepared they were for the one that hit their community two years ago.

On Sept 8, 2011, the Susquehanna River overflowed its banks in the aftermath of Hurricane Irene and Tropical Storm Lee. The flood displaced thousands of people in West Pittston and caused millions of dollars in damage. And, it came within a block of Trinity Episcopal Church where Major is rector and Ungvarsky is missioner for ministries and renewal.

Staff had difficulty contacting members who had evacuated because only home phone numbers were on file. “Eight families were directly affected,” she said. “It was weeks before we could contact some of them.”

That won’t happen next time, now that the parish is developing its own disaster preparedness plan. It will also have a better inventory of physical and human assets that it can mobilize to create an even better response.

While Trinity was undamaged by the 2011 flood, homes and buildings in the community were underwater. By listening to community members, parishioners determined how to help meet needs that weren’t being addressed by other responders. The parish ultimately developed FLOODCare, a disaster ministry that assisted in putting resources in vulnerable community members’ hands and helping them rebuild. Ungvarsky is its coordinator.

Ungvarsky and Major have now been tasked by the diocese to run parish preparedness trainings. The diocese passed a resolution last year that all parishes develop disaster plans.

The experience of Trinity Episcopal teaches some important lessons about the role the Church can play in a disaster, and the need to be ready to take action.

Responding and preparing are what churches do best

Responding to crisis is something that the Church can be particularly well equipped to do. Parishes have a large capacity to gather people, to serve coffee and hot meals, to sponsor speakers, and share information. As a comforting welcoming community, they often respond to emergencies with meals, donations, and volunteers to clean up debris or rebuild homes. Congregations make space for loss and room for recovery. They worship and pray.

Trinity Episcopal is a great example of that. It had members who wanted to help. They offered the large kitchen sinks to community members to wash possessions damaged by the flood. They had the wisdom to seek out and listen to those who were not being helped by others and to determine what the parish’s special niche and capacity in responding might be. They rallied the resources of the diocese. They got to work caring for the vulnerable.

But Ungvarsky will be the first to tell you that the response would have looked a bit different had Trinity done some preparation before the Susquehanna River overflowed. A more thorough inventory of their assets would have provided more information for planning their response.

And preparation is also something that the Church can be particularly good at. So much of our liturgical life revolves around preparation. We prepare seasonally for the coming of Christ: in birth, in resurrection, and in glory. We prepare couples for marriage, families for the baptism of their children, and children for faith-filled adulthood. We prepare soup for community meals, gather food for food pantries, and knit prayer shawls in anticipation of need. As Church, we know in our bones what it is to prepare. We know that it’s the work of all members, not just the staff.

And we know that it has a tedious side as well. For a church, preparing to respond to a disaster requires tasks like these:

It requires a few planning meetings to talk things through, and a small committee to see that it gets done. It looks a lot like the work that parishes already do.

For parishes like Trinity Episcopal in West Pittston, who have spent the last few years responding to the long-term effects of a disaster in their midst, preparedness is a chance to do things even better next time.

Episcopal Relief & Development offers a free Preparedness Planning Guide for Congregations and Parishes and an accompanying facilitator’s guide to walk congregations through the process of preparing for a disaster.