Rethinking The Pledge, Part 1: It's Not Stewardship 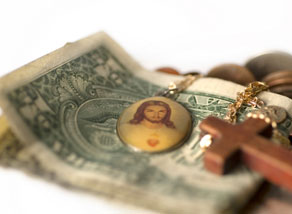 Around this time of year, vestries and stewardship committees, rectors and wardens, finance committees, and those few parishioners who’ve served on any of the above working groups have a big thing on their mind: the annual pledge campaign. Letters are about to go out and, in time, properly completed pledge cards will start to trickle in. This will happen anytime between the next several weeks and the initial days of, say, February of next year.

I can make three reliable predictions about this way of doing business: one, the amount of income that’s pledged will not meet the annual budget’s pre-determined expenditures; two, the amount of talk and strategy will not correlate to an increase in giving and, a greater emphasis on the former might lead to a decrease in the latter; and, three, the actual giving income by the close of business next year will be more than the initial amount pledged.

So why continue a system which we know isn’t as effective as it could be or, maybe was at one time? It’s not that the typical autumn pledge campaign system is broken, mind you. It’s lacking something. And what I believe it’s lacking is more than made up for in the rest of the contours of our communal faith lives. In most congregations the regular pattern of our life together as the Body of Christ – the baptizing, teaching, preaching, forming, and discipling that we do when we‘re not trying to get people to fill out a pledge form – more than makes up for this sterile annual ritual … a ritual which doesn’t tell anyone how much money they’re going to get and whether they’ll even get it!

At St. George’s, Valley Lee, we’re ditching this conventional system. Years ago, we got rid of using the word ‘stewardship’ around this time of year. Just like public media, we’ve called it the ‘Pledge Drive.’ Like others, we believe stewardship implies the whole of life. Until we re-brand it the very least we can do, for starters, is remove its association with this time of year.

This time of year is a ripe opportunity for an honest conversation, even if it’s a hard truth. This is a time in which we’re really and seriously focusing on one part of stewardship: money. And there’s biblical precedent for it, too. Pastor Greg Laurie writes, “Money is such an important topic in the Bible that it is the main subject of nearly half of the parables Jesus told. In addition, one in every seven verses in the New Testament deals with this topic. The Bible offers 500 verses on prayer, fewer than 500 verses on faith, and more than 2,000 verses on money. In fact, 15 percent of everything Jesus ever taught was on the topic of money and possessions-more than His teachings on heaven and hell combined.” [1]

These next few months are an opportunity for the Christian church to start talking in real terms about real life. It takes some courage: first, a courage to talk about money and, two, a courage to re-think what we’re funding and why. How can you and your leadership gather the courage to stand up and talk in real terms about the money we say we need to carry forward the work of this one part of Christ’s Body this next year and the money, we believe, people will be more than happy to share?

We’ll talk about the second courage in two weeks: being emboldened, then, to fundamentally re-think what we fund and why.