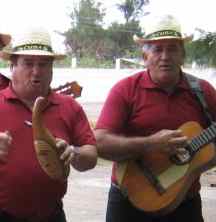 Music has always been a struggle in our Spanish service at St. Mary’s. As we have slowly built membership in our largely low-income neighborhood, we are not anywhere close to generating the kind of offerings that would fully support the clergy time that goes into the service, much less paying a professional musician. We’ve tried different things over the years -- a priest with a guitar or piano, a capella singing, some paid musical help. In recent years, we’ve come upon what I would argue is the best musical situation yet: bartering for band music.

We are fortunate to have quite a bit of space in a neighborhood that is profoundly short on space for community activities. Some of that space has filled up with bands. In the cultural context of our particular neighborhood, those are woodwind-and-brass bands that play traditional Zapotec music from the mountains of southern Mexico.

The bands contribute in various ways. They give financial contributions to the best of their ability. They bring toilet paper and paper towels. They organize cleanup days and pick up trash. Their evening presence keeps the whole property safer and more secure; they once even put out a dumpster fire.

But perhaps the best gift of the bands is music. As it should be. Once a month, as well as on special feast days, the bands play in the church service. Church attendance takes a great leap, exposing many more people to the ministry and style of the Episcopal Church. The band members themselves, mostly teenagers, become ministers of music, and also absorb the experience of our Episcopal service. One young woman recently told me, in great awkward teenage style, that she liked our church the best because in “like regular church?” the “um...what do you call them, like popes or whatever, who like to do the mass?” kind of rush through things and at St. Mary’s “it like totally seems like you’re like really into what you’re saying, like you really like believe it and stuff?” 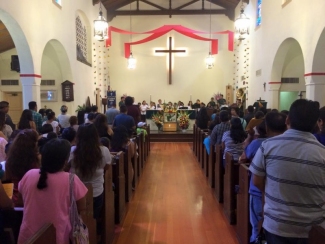 For many smaller and financially struggling parishes, funding music has become more and more of a challenge. Could your congregation find some local musicians who need space and would be open to offering some music in the context of worship? Might it be ok if they weren’t already steeped in Episcopal tradition? Might they bring some of their friends and family and fans to check out the music, and along the way maybe even fall in love with the church?

Are there other areas besides music where the bartering concept might strengthen your ministry or bring in needed skills that you would otherwise have to pay for in cash?