What Needs To Go Out, So The New Can Come In? 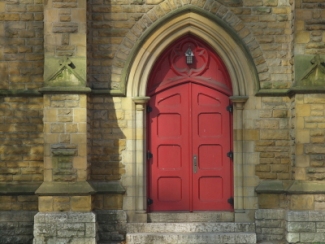 We’re investigating and working to install more energy- and, we hope, financially-efficient HVAC systems at St. George’s. The very comprehensive energy audit taught me a lot, and not just about insulation and ducts. I learned that the most effective way to adjust the temperature in a room isn’t only to force more cold/hot air into the space. “Picture a glass full of water,” our auditor told me, “you can’t get more air into that glass until you get some of the water out of it.” The HVAC principle: you can’t cool a space simply by shoving more cold air ducts into the room; you need to also find a way to get the hot air out.

I’d say that principle also applies to the organizational capacity of churches (maybe even my un-intended pun about hot air), especially now as most of us are looking at next year’s budgets. Few church leaders will be able to change the ‘temperature’, the capacity of our congregations until we also, and at the same time, move out some of the stuff which is standing in the way. Many (most?) clergy and lay leaders in The Episcopal Church are trying valiantly to straddle the line between desiring the emerging ‘new’ and maintaining, or at least not threatening, our conventional and, to date, relatively financially coherent strategy: create members of the local church and ask them to fund its operations. If funding slips, either (a) get more members or (b) get more money out of the ones you have or (c) cut expenses.

There’s plenty of good, fresh air coming in from outside. Create a better music program. Improve your website and social media strategy. Impact your community with an awesome VBS. Kickstart your Sunday School, even though it may not be on Sunday mornings. Get to know your community, especially those who have no church affiliation. So why aren’t we doing all these great new things?

I’m reminded of an all-day training I once attended with the Saul Alinsky-inspired Industrial Arts Foundation. “Alinsky said we have to perform [I forget the exact number, so I’ll say…] twenty ‘stoop meetings’ every day”, the facilitator told the group of clergy – ‘stoop meetings’ being what Alinsky said a community organizer needs to do while walking the neighborhood, as people sat, back then at least, on their front porches or stoops. “How many meetings every day?” one obviously agitated pastor said, “Did Alinsky also have to write a sermon, attend committee meetings, edit the newsletter, fix broken boilers, raise up new Sunday School teachers, and pastor every sick person?!” The other pastors in the room nodded their heads. Her point was a good one.

The very financial situation of most of our congregations is such that we don’t have much room to dream – let alone drop, or even risk dropping those other things which are fundamentally supporting the economic model we have in place today. It’s not a good economic model, we know, nor are many of the things we do in the name of Jesus mission-critical to the Body of Christ (did I mention the boilers?). We know it’s not a good discipleship model, and we’re also aware that it doesn’t create many church members any longer, the very point it was designed to do in the first place. But it’s the model we have, and simply talking about the new without addressing what we need to do in order to get the stale, old air out of the room isn’t getting us anywhere.

So what can we do?

I understand that this is pretty ‘insider stuff.’ It’s not very exciting and, in fact, it’s probably downright frightening to some. But I would argue that now is a good time to have this serious, honest conversation about the economic model underpinning most of our congregations. When we do so, I’ll be we’ll be the first to realize that the problem isn’t a lack of ideas or vision. It’s just that we haven’t yet found a way, institutionally, to allow the old, stale air to get out of the room.