The Challenges and Opportunities of New Calls 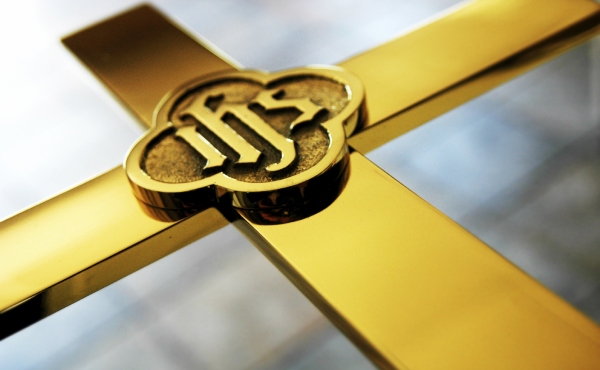 As far as blogging goes, I’ve been quiet. I haven’t submitted a post to ECF Vital Practices since March of this year, which (not ironically) was around the time I accepted a new call as rector of a new congregation – Church of the Ascension in Lexington Park, Maryland. While that, in itself, would be good reason to be quiet(er) and focus more intentionally on the new community to which I’ve been called, I also didn’t leave my other job – rector of St. George’s, Valley Lee.

At a clergy conference a friend noticed my name tag gained an extra congregation. “Is this like a game of Monopoly?” he asked, wondering how many other ‘properties’ I could pick up along my way. That’s not at all my goal, but at the time I am curious how far we can push things in our church’s fairly outmoded business model. I’m not at all convinced we, the Episcopal Church, have arrived at a truly gospel-centered, ministry-first understanding of how and why we operate institutionally in the ways we do. Nor am I convinced that we really want to engage a prolonged and serious conversation about some of these fundamental ‘business’ assumptions.

So I, for my part, took on this new call. On the one hand, I generally tend to think a little grist in the mill goes a long way. If we push ourselves in new directions, I believe we might in turn realize new things – not the least about God, who is (still) the Lord of the church. On the other hand, it can hardly be said I’m impulsive. I’ve been rector of St. George’s, Valley Lee for ten years, and we’ve been working on this collaborative future for most of that decade. Together with St. George’s and the other parishes in the Diocese of Washington’s southern Maryland region – many of whom are, quite literally, connected by blood and well-established family ties – we’ve been talking about collaborative ministry and mission, including collaborative institutional operations, for at least nine years. I have pages and pages of documents – meeting minutes, emails, programs, initiatives, listening sessions, valiant attempts and inglorious failures. Congregational, regional, diocesan-wide; we’ve been there.

This new call as the ‘shared’ rector of Ascension, Lexington Park and St. George’s, Valley Lee is just that: a new call. And with it has come some amazing insights. Here are my top five:

1. Following God leads to new things.
I knew that my taking this new call would, in a sense, inject something new into both parishes. ‘New’ is exciting. ‘New’ is also filled with hope and sometimes unsettling. I suspected it might help broaden our sense of who we are and who Christ is calling us to be. Moving back and forth between two co-equal partners in this new missional relationship has helped each congregation recognize that it does not exist unto itself, for itself. That’s a realization that can’t simply be preached. It has to be experienced, lived.

2. Following God is hard work – yes, even in the church.
Part of what took so long – and I still believe that nine years is a long time; too long, in fact – has to do with the resistance, fear, uncertainty, and doubt we had come to accept as institutional Christian communities. These are not easily fixable, purely rational issues. These are symptomatic of emotional and, more importantly, spiritual dis-ease. In our collaborative developments we’ve been quite literally testing the boundaries of spiritual renewal and struggle. I know how much Christ is still the Lord of the church. I also know that the church, itself, can be a proving ground of faith in Him.

3. Ministry and renewed mission doesn’t happen because the institutional stuff got smaller.
Technically, I’m a half-time rector of two institutionally independent parishes. There’s greater financial breathing room. Neither vestry is stuck with the ‘one-parish / one-priest’ mindset which most of our congregations have become intoxicated by. But simply reducing overhead doesn’t mean we’ve become more (or less) of a vibrant congregation. A greater commitment to transformative ministry doesn’t come about because there’s more money in the checking account. Developing a ministry-first model of church is where the spiritual issues still lie.

4. Smart decisions also need genuine pastoral heart.
I’m more seasoned in ministry than I was a decade ago so my intuitive ‘hunches’ and sense of call are more finely honed. At the same time, as part of this new call I’ve had the opportunity to value once again the spiritual practices of great pastors -- patience, presence, perseverance, and grace. It’s often struck me as odd: the church tends to praise short, impactful rector tenures (which oftentimes rank high on good feelings, but low on direction) and doesn’t know what to feel about long rector tenures (which are oftentimes low on vision but high on good feelings). What we really need to talk about, however, is how leaders can remain impactful and, at the same time, invest deep relationships.

5. The local congregation is still (and will always be) the place where mission matters most.
I don’t know a single priest who got into this for the money. And yet, as executive directors of local not-for-profit corporations, we have our hands in a whole lot of stuff. If we’re not careful to remain rooted in Christ and be, truly, a priest in community, what we see can change our way of thinking and praying and being. Even though local congregations can sometimes trend toward secular, business-thinking, it’s also still very much the place where mission matters most. Now, I interact with twice as many people on a Sunday as I once did. I am no longer in the mental position to be deluded into thinking that the particular needs of a particular, fixed place are the same things as growing the Body of Christ. I am no longer tricked into thinking that institutional sustainability and growth are the same as being an effective priest, bringing people into deeper relationship with God in Christ. Vocational renewal does not come about without challenge, which is generally the first step toward vitality. The pressing need for the priest to renew her/his vocation and the congregation to renew its own are hand-in-glove, in fact.