This is part 2 in a short series of posts about St. Mary’s Church in Los Angeles and our recent adventures as one of the first “safe parking” sites in the city. We designate ten spaces each night for neighbors who live in their vehicles and a partner organization organizes the logistics – security, sanitation, case management and so on. Click here for an article about how it works. 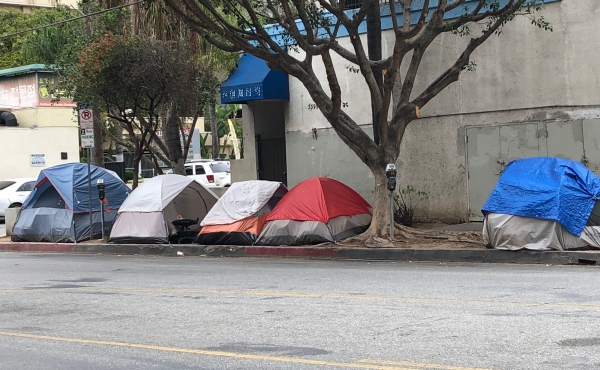 There was a time when I would have been frustrated with the small scale of our offering. Ten parking spaces when nearly one percent of the population of Los Angeles lives on the streets? I easily count more than ten tent encampments just on my 1.5 mile walk from home to church. Things are bad.

Ten spaces will definitely not solve the problem. However, I have been amazed to discover once again how God can take a small offering and multiply its impact. You might think that the mustard seed parable or the feeding of the 5000 (not counting women and children?!) would have been enough to convince me. Maybe it was growing up in Missouri, the oddly named “show me state”. I have to see things with my own eyes, hear them with my own ears.

Deciding to offer a piece of our modest parking lot for safe parking was not a huge decision for St. Mary’s. We considered it carefully, but there was no real question that ten parking spaces that mostly go unused at night was something we could spare without great inconvenience. (More in post #3 about right-sizing decisions and especially how not to “overmake” decisions)

Our offering of space comes at a time when the affordable housing crisis and the exploding population of unhoused Angelenos is THE hot topic in our city. The mayor’s recent gathering for the National Day of Prayer focused on homelessness. There is an article about homelessness on the front page of the LA Times several days each week.

Right around when our safe parking site opened, Orange County, our neighbor to the south, experienced an explosion of vicious controversy over plans to house people who were being evicted from huge encampments along a dry riverbed. People said some pretty rough things in the course of that debate, including suggesting that all the unhoused people in Orange County should be shipped to some other, poorer, less appealing county so as not to bring down Orange County’s famously high property values

A few weeks after our safe parking site opened, the Los Angeles City Council announced a plan to put up a temporary shelter in every council district. This is a big deal because one of the hallmarks of emergency shelter in Los Angeles has been its concentration in just a few severely impacted neighborhoods. People often opt to sleep on the streets even when shelter beds are available because the beds are far away and in areas that people perceive to be unsafe. It turns out that no one really wants to feel like they are being warehoused out of sight. Skid Row, the downtown neighborhood with the most shelter beds has a nightmarish quality with its apocalyptic levels of human suffering.

When our local council district proposed a site for its shelter, walking distance from the church, we found ourselves with the opportunity to bear witness. Even as some community groups spun grim scenarios about what housing the homeless in our neighborhood might look like, we had a quiet spot where we had been offering hospitality without incident for several months. As a business next to the proposed shelter site posted a huge banner with the words, “Protect our school children and local businesses. No homeless shelter on this site!” we were already there, tucked between two schools and near many local businesses, creating no chaos or scandal whatsoever. We were able to speak about what had motivated us to offer that hospitality, an opportunity to frame the conversation about our neighbors—housed and unhoused—in the light of the gospel.

Here is an example of what that sounded like.

Our little church is not an activist place. We are a community church with diverse political views and perspectives. We shy away from controversy. We also have a powerful history of welcome and inclusion that goes back to our deepest roots. The congregation and its members have weathered more than a few storms. We can honestly say that “we have come this far by faith, leaning on the Lord.”

Our small offering has born surprisingly big fruit in a short time. We have been given a chance to bear witness, to speak publicly of God’s love and the wideness of God’s mercy. Pretty good for a little church and ten parking spaces.