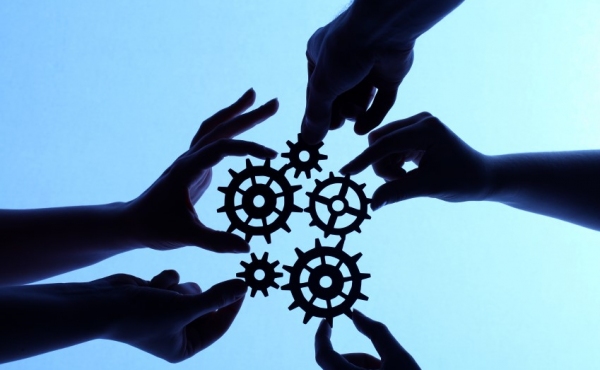 I serve as the rector of two churches, and even though both congregations are similar in many ways, today, they didn’t start out that way. One, St. George’s in Valley Lee, is so old that most of our earliest records are housed in our state Archives in Annapolis, MD. The other, Ascension in Lexington Park, was planted as a mission chapel in 1954 and became its own parish in 1968. Ascension has only had a few rectors – I’m number 4 – and I’m especially grateful that its first rector, the founder of the Mission-turned-Parish, spent a great deal of time near the end of his life writing his memories and reflections.

Spending time with the early story of Ascension is a fun read. The Patuxent River Naval Air Station, now St. Mary’s County’s single-largest economic driver, had only recently opened in the early years of WWII, and young aviators and engineers and families were flocking down to this once-remote part of Southern Maryland. The Rev’d Charles Daugherty – Chuck, everyone called him – was the newly-ordained rector of an established church in Leonardtown, the County seat. At the same time, he was planting and growing the congregation at the Chapel of the Ascension in the context of all that youth and fast-paced growth. In a classic post-War story of American suburban life, Ascension and Chuck simply couldn’t keep up – growth was leading to more growth, more families were crowding into the Sunday School, and they needed to add chairs to the aisles most Sunday mornings. On top of that, he was serving two communities of faith, and he was living in the rectory of the older, established congregation in town.

So Chuck, and Ascension, and the Episcopal Diocese of Washington responded. They put Ascension on a path to become its own Parish, the result of which is that it would call its own priest: a Rector, not a Vicar. (They wound up calling Chuck, if you couldn’t already tell.) The other church would also call a Rector, and so on and so forth. In fact, this very story played out in so many communities throughout the Episcopal Church that it hardly seems worth repeating.

But there’s a lesson, today, in their method from yesterday. That’s why I’m repeating it. Not long ago, certain segments of leadership within The Episcopal Church so clearly understood, or at least desired to better understand the general trends and patterns of volunteerism and American culture that they knew they had to make some changes. They said very simply: We need to adjust. We need to set up new structures. Sure, it didn’t hurt that they were changing in order to accommodate rapid growth and expansion, but if that’s the only reason why we’re not looking more carefully at these things today that’s nothing more than a state of being called ‘denial.’ Just because people aren’t flocking to our churches and Sunday Schools, and beating down our doors to participate in our various groupings, doesn’t mean that we shouldn’t be paying careful attention to both internal and external trends and patterns.

Ascension in Lexington Park and St. George’s in Valley Lee – the two congregations I serve as rector – are doing precisely that: leaning in to trends around, say, volunteerism in American culture today. Let me be clear: both of our churches are fairly solid and strong, but the popular weight of Sunday morning sporting events and the kind of “I’ll make it if I feel like it…” approach to voluntary life today is something each and every congregation needs to account for, at least be anxiously curious about. Back in the 1950s and 60s, from what I can tell, Chuck and Ascension became a full-fledged Parish with roughly the same number of people and less aggregate giving per member than we have today! In today’s context, if we wanted to quite literally re-create the church of yesterday, we’d need at least three times as many people and twice as much financial investment as they had back then. In many ways, the church’s internal numbers haven’t really changed. What has changed, and changed so substantially that there’s no going back, are the external realities: rising costs and increasing demands on organizational leadership.

That’s why we’ve set out to merge. To be clear, we are merging two Parishes into one new Parish and keeping open two churches, or worshipping communities. The geography will increase and the internal bureaucracy will be decreased. Both churches will remain, and they’ll keep their names – St. George’s in Valley Lee and Ascension in Lexington Park. We will share one vestry, one set of books, one leadership body, one Annual Meeting. We describe it as “one church, two locations.”

But why? Why merge? We’ve been asking this question of ourselves for a long time, and others in our communities have also asked it. Why merge? Why bother? For me, there are two reasons: the practical and the missional.

First, the practical reason to merge parishes is that over-complexity is among the chief characteristics of a declining church. In his book, Moving off the Map, Thomas G. Bandy presents ten “characteristics of a declining church.” Number three on his list is an “unwieldy organization,” those bureaucracies that tend to be very large, increasingly complex, and require large numbers of volunteers and volunteer hours just to pull off the most basic tasks of common service, information and personnel management, organization, and communication. I found myself wondering if these Unwieldy Organizations are the cause or the effect of some of Bandy’s other characteristics, such as (1) Ambiguous identity (…no motivating vision or key mission) or (2) Low mission emphasis (…survival tends to be uppermost in the minds of church leaders).

Second, and perhaps the more pressing reason to merge, is that complexity and establishment-thinking are no friend to missional growth. If we want to create churches who engage our communities and seek to better serve our neighborhoods, we need to create internal congregational cultures that are as inquisitive as they are comfortable in their ways, as interested in new relationships as they are their own story. This is what our Vestry wrote to parishioners at both Ascension and St. George’s:

Our business model determines how we spend energy, resources, and time. We believe that this model is taking away the energy, resources, and time we believe God is calling us to invest in mission and ministry. If we want to move in a new direction, we need more energy, resources, and time to devote to it. We also believe there is historical precedent to doing so; in fact, the very same precedent that got us into the situation in which we currently find ourselves. Roughly fifty years ago, our predecessors set up the institutional shape of the churches we have inherited, and they did so based on the world as they knew it. Nowadays, however, no longer does the world around us compel people to join their local church; in fact, sometimes it feels like the opposite! If, therefore, people are no longer compelled by cultural forces to move toward and, ultimately, into their local church, the church needs to be sufficiently nimble so as to respond and move into better, more impactful relationships with our community. That is, we need the church to get out of itself so that we can get in to the community. We are proposing to do precisely what our predecessors did approximately fifty years ago. We are proposing to set up the business model of the church on the shape of the world as we currently know it.