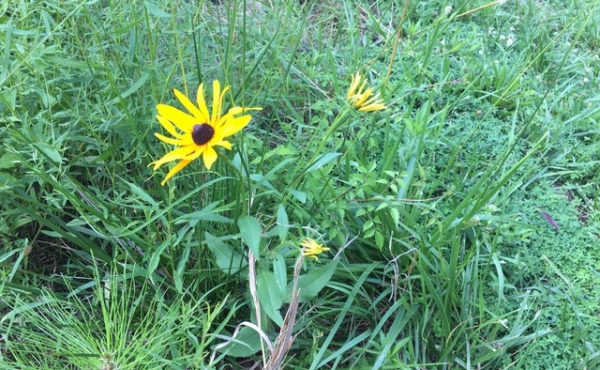 The patch was rough. Three years after the old man who had lovingly tended the south five acres of the site for decades had moved to Florida, The Church of the Advocate acquired the land. Three years after that, we finally had a building in which to worship on the land. But having rented worship space for 11 years, it took us a while just to recover from all the transition and to settle into the reality of having our own place. We didn’t pay very much attention to what was growing where. We just tried to keep some of the grass mowed.

Soon, however, it became clear that the grounds just weren’t as pretty as they had been. Invasive plants had moved in, aggressive natives, like honeysuckle, sweet gum and pine had started growing like weeds. We had been clear from the beginning that the site was to be shared with anyone who came our way, whether they wanted to be part of the church or not. And wonderfully, one person who came our way was an amateur horticulturalist, a woman passionate about restoring land to native flora and fauna. We got to talking.

The first thing we learned was that, “when land is cleared for large developments of suburban housing, the trees, bushes, flowers, and grasses that naturally populate the area are also cleared. Then, when the developments are “landscaped,” ornamental plants are often chosen based on cost, low maintenance and popularity rather than function within the native ecosystem. Displacement of native flora directly results in displacement of native fauna – bees, butterflies, and birds, as well as mammals. Restoring native plants restores the health and function of the local ecosystem." (from the website, PiedmontPatch.org).

So we cast a vision. We would create a place in which to model that restoration, and we would invite others to come and learn, participate, and, hopefully, be inspired. Window box by window box, garden by garden, field by field, over time, perhaps the Piedmont could return to its native habitat, one patch at a time.

We applied for a Stewardship of Creation Grant from The Episcopal Church, missed it, applied again with greater emphasis on how others would be involved in the project, and we got the grant. That gave us the impetus we needed. We developed a website, started a quarterly speaker series, designed a landscape and started purchasing plants. Then we had a workday.

Well, the next thing we learned was that people who are into plants and native habitats are very generous and committed people. Local nurseries sold us plants at a significant reduction of cost, the state botanical gardens made plant donations, as did local gardeners. And when we had the workday, half again as many folks from the wider community showed up to work as there were folks volunteering from the church. It was stunning.

Then the local Audubon chapter got involved. They donated birdhouses and donated the kinds of plants and shrubs that would best attract bluebirds and brown-headed nuthatches. A local Episcopal Service Corps made a service project of improving the watering system for the plantings. A large vegetable garden was planted too, and a mulching system installed. A beekeeper set up a hive. Professional speakers, teaching about invasive species and native birds, and the Piedmont Prairie and more, were just as likely as not to donate their speaking fees back for more plants to be purchased

A year into it, we are finding that the aggressive native species are still mighty aggressive. And it is hot work to pull honeysuckle in the summer North Carolina sun. We got more plans for getting others involved, especially students from the local schools and universities, to learn and to care. Our inspiration comes from the beauty of the earth and plants and bugs and butterflies. But also by those outside the church, their efforts and generosity for the good of the whole, for the repair of the world. The Spirit is moving through it all.