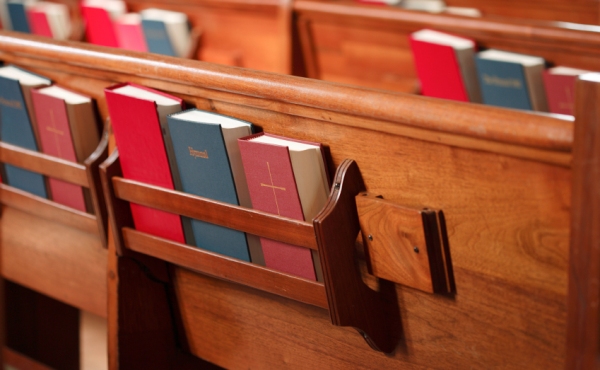 Most of us who are in the Episcopal Church have a love of the liturgy. Or at least an appreciation for it. Some are well-versed in the meaning of the movement and the posture, the theological nuance of the words. Others have been formed by decades of weekly practice, the words of the canticles still rolling off the tongue, the Prayer of Humble Access still echoing in our soul.

But there are many in our pews and chairs who are still learning the rhythms of the liturgy. They know that there are songs, readings, the Peace and the Eucharist, and that the clergy come in at the beginning and go out at the end. But they don’t even think about the idea of being formed as the Body of Christ. Maybe they have a grasp of the liturgical year, but they still think of Pentecost as the day we wear red. And, increasingly, they are likely to attend about once a month, so may only get one Sunday in the shorter seasons. They will not have the continuity and repetition that leads to learning.

Then there are those who are newcomers, checking out the Episcopal church for one reason or another. They may have grown up in a liturgical sacramental setting, but haven’t thought about it since they were confirmed, or since they were married. Or they may have no church background at all. They think the liturgy is “cool”, but they aren’t ready to engage in a confirmation class. And when they are, they may end up missing the class on the liturgy…

All of this means that if we want people to know that the liturgy is an expression of our faith and that it forms us in our faith, we are going to have to step up our efforts to connect the dots for them. This doesn’t necessarily mean more classes, though more classes will certainly attract and teach some. But it does impel us to consider our words of hospitality and of printed page.

Some churches in fast growing regions, such as Grace Church in Oklahoma, are developing annotated Sunday bulletins or service guides. These include a bit of history, perhaps, some explanations of practices such as the Collect for Purity, the Offertory, the Peace, or the Dismissal (the Sending Forth). Marion Hatchett’s Commentary of the American Prayer Book is a ready resource. His teaching can be edited to be easily understood by the neophyte.

A bulletin insert or handout can include several notes at once and can be included for the season, even taken home for later focused reading. If a church has a weekly bulletin, perhaps one liturgical bit each Sunday over several weeks, or a season. The long green season between Pentecost and Advent is a perfect time for this. For example:

The Collect of the Day: Collect is a word for a prayer that gathers together the threads of the readings or celebrations of the day and also collects the people together in prayer at the start of the liturgy. Each Sunday of the liturgical year has a Collect unto that Sunday, many of which were written by Thomas Cranmer for the first Book of Common Prayer in the 16th century.

These notes can help the congregation to better understand, not only what the various parts of the liturgy are meant to do, but also that as we participate in the liturgy we are joining in practices that have shaped Christians for hundreds of years. Liturgy notes can also provide a shared vocabulary for the congregation, leading, perhaps to conversations at coffee hour or in cars heading home, deepening the liturgical experience of formation.