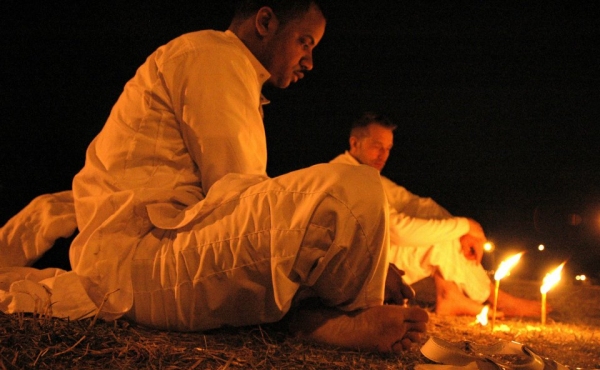 Like so many of my fellow Episcopalians, I love the season of Advent. Really, I like all three winter seasons – Advent, Christmas, Epiphany.

I live in the northern hemisphere, so these winter seasons coincide with the dark days of the year, which match up well with the themes of Jesus, the Light, coming into the darkness of the world. “Give us grace to cast away the works of darkness and put on the armor of light!”, we pray in the Collect for the first Sunday of Advent. “Jesus, the Light of the World”, we sing in Christmastide. And, in the season of Epiphany, we celebrate at that we are “the light of the world”, called to carry that light out for all the world to see.

But, in recent years, I’ve had my consciousness raised by the testimony of dark-skinned clergy and laity, those for whom the popular hymn, “I want to walk as a child of the light, I want to follow Jesus” causes pain.

With heightened sensitivity, the whole metaphor of Paul, source of the phrase in our Advent One Collect, can be questioned. Cast away the works of darkness and put on the armor of light? What are we to do about the subtle or not-so-subtle way in which the hymn, the metaphor puts down so many people of God?

Now, as a personality type, I embrace change. I like to try new words, new ways, new foods, new experiences. Though I cherish many of our Anglican/Episcopal traditions, too. Which is why I am so grateful to be a priest in the 21st century Episcopal Church, when so much attention is being given to making the traditions new for a new generation in a new century.

I confess that the metaphor of Jesus bringing light into darkness, the idea of putting on the armor of light, are cherished traditions I don’t want to release. The challenge against these words is difficult for me to hear, to receive. I really don’t want to change them, to let them go. So I’m listening to the experiences of people of color in response to this metaphor as much as I can. And I’m on the lookout for alternatives.

I can see two stems to this challenge and change. First, to reinterpret darkness and blackness from a place of fear and nothingness to a place of holiness, creation and creativity. For this I commend the sermon offered by The Rev. Wil Gafney at All Saints Church in Pasadena on Advent One, 2019. In the sermon, Gafney quotes The Rt. Rev. Stephen Charleston Native American retired bishop saying:

I have heard that the afterlife is a place of perpetual light. That’s a problem. Heaven needs night. Darkness is not evil, but a realm of mystery and imagination. The day is constant, but the night is creative. The stars dance. The moon dreams. The comets write poetry of fire. Without the night there is no dawn or twilight, no moments of sacred ambiguity, no subtle changes of perception, no promises kept or just made, a holy pledge of healing or of hope. No, please, we need the night in heaven. We need that glorious darkness, that obscure beauty, drifting on wedding gown clouds of white across an obsidian sky.

Jesus can still be the light. Just not so much the light that casts out darkness, but rather, a light that dwells with and within it. And the armor we put on doesn’t have to be the armor of light given to protect us from darkness. But rather, it can be a shield against the power of enemies or those who would do us harm.

St. Patrick of Ireland lived in the 5th century, in the days of armor. As legend goes, he inscribed his breastplate with a prayer of faith. Or maybe he made his prayer of faith into his metaphorical breastplate. Either way, it included these words:

I bind to myself today…
God's Word to give me speech,
God's Hand to guide me,
God's Way to lie before me,
God's Shield to shelter me,
God's Host to secure me,
Against the snares of demons….
Against everyone who meditates injury to me,
Whether far or near,
Whether few or with many.

So, in these northern hemisphere winter seasons, these seasons of darkness and light, perhaps we could change our metaphor a bit. And rather than cast away the works of darkness, we can be more particular, and instead cast away the works of those policies, those tendencies, proclivities, doubts, practices, traditions, by which we deny ourselves and others fullness of life, and to put on, to re-direct, to embrace and hold fast, to the way of life, revealed by God in Christ.