What Happened to the Midnight Mass? 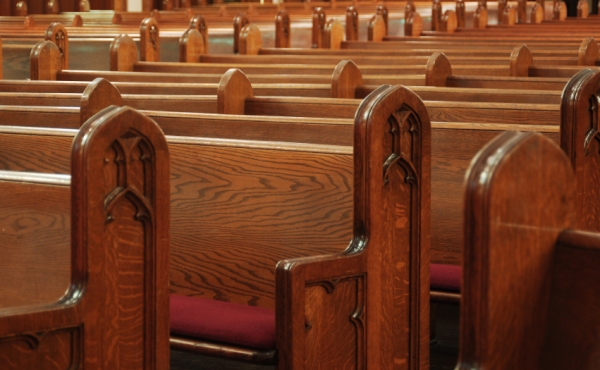 When I was growing up, my family and I went to the early evening Christmas Eve worship service. It had the most kids, and I can remember some years when that service was, essentially, the Christmas pageant. After worship, we loaded into the station wagon, came home, ate dinner and my parents allowed us to open one present. It had already been a long day up to that point, and I remember being so tired – and filled with so much excitement about the next morning – that I don’t ever recall having a problem going to sleep that night.

Fast forward twenty years or so, and I got ordained a priest in The Episcopal Church. That’s when Christmas Eve, of course, took on another meaning and identity – it was a work night, although one of my favorite work nights of the year. For the past fifteen years, ever since my ordination, Christmas Eve has been a great night to work and worship. It’s also meant that I show up to every worship service, not only the early evening ones but that later one, the beloved so-called “Midnight Mass.”

I’ll go out on a limb and say, simply, that the Midnight Mass is no longer the principal worship event on Christmas Eve. Further, I think we, the church, need to face this reality and come up with plans accordingly.

First, cultural trends around children and child-raising mean that people want to be in church with their children and grandchildren on Christmas Eve. Long gone is the worldview that children shall be ‘seen and not heard,’ and I suspect that’s a cultural shift which is built in to our world, today. Practically speaking, then, this means most people will want to be at an early worship service. Our churches had better make sure that children are welcome, if not engaged.

Second, the earlier the better. Understanding the expectation that children will be present means the church should make as many plans as possible to make earlier options. I know this is too little, too late for Christmas plans this year, but it’s an invitation to re-think your schedule for 2020. A few years ago, we started a 3pm Christmas Eve worship service; in fact, I know of some local churches doing something at 1 or 2pm, too. A colleague told me that that cannot be, properly speaking, a Christmas Eve service because the sun hasn’t gone down yet. That’s probably true, even though the sun is well on its way down at the end of the service, and if you turn off the lights in the church and sing “Silent Night” it feels dark enough! But that service is always well attended, although I can’t say that there are more children at 3pm than at the other services (5pm or 7pm).

Third, it’s not necessarily practical to make any of the earlier services a specific “Children’s Service,” as if that means a service specifically designed for and led by children. It’s important to engage the children who are in the room that night, but all ages and, certainly, older adults will want to come to an earlier Christmas Eve service just as much as parents and grandparents of younger children. And given all the other things families with younger children have to do that night, there may be as many children at a 7pm worship service as there are older adults at 3pm. What if most every service we offer on Christmas Eve recognizes that there will be a diversity of ages in the church, and we design a worship experience accordingly?

Fourth, Christmas Eve is probably not the night to pull out every trick in the liturgical basket. People are coming to church to hear the good news of God’s peace and justice. They’re also coming to hear Luke chapter 2 (Linus nailed it in Charlie Brown Christmas, anyway), sing some of those beloved carols, and hear a short, nice message. We probably don’t need to process children around the church and bless the creche and have readings upon readings and anthems upon anthems. “My Christmas gift to you,” I tell my congregations, “is a straightforward lovely worship service – one that gets you out of church and on your way!”

Fifth, Christmas Eve is actually a wonderful time to socialize, and build excellent connections. This is something my wife brought to my attention. We host an all-evening reception at the Rectory, that is, from 4 to 9pm Christmas Eve. I shouldn’t say “we” as I’m not really there all night, and I only make a guest appearance in my own home, but I’m amazed every year by how many people turn out – just for a quick ‘hello’ and moment of kind cheer. We time it in relation to the worship services that night, and we call it, very simply, a “Drop-in Reception.” And that’s what people do – drop in and enjoy mingling, even if only for a bit.

And, sixth, this brings me back ‘round to the Midnight Mass. Is it changing? Yes, no doubt. Should it end? No.

The point I feel I should offer, here, is that church leaders should come up with a better way to resource the Midnight Mass. Not every local congregation should, by itself, offer a Midnight Mass. Perhaps this is a great evening to practice collaboration with your local Episcopal and ecumenical Christian neighbors. There’s no reason whatsoever that Lutherans, Presbyterians, Episcopalians, Methodists, and any coalition of Christian churches couldn’t gather in the largest, most centrally located church and have one big Midnight Mass! Not only is this better for the clergy and musicians who have to be present at that hour of the night, anyway, but it also can help re-kindle for those who love that late, late service the feeling that, no, this service will not go away entirely and, in fact, there are still lots of Christians who also dearly love the Midnight Mass … there’s just not as many Midnight Mass Christians as there were, say, forty or fifty years ago.