Farewell to the Vulture Den 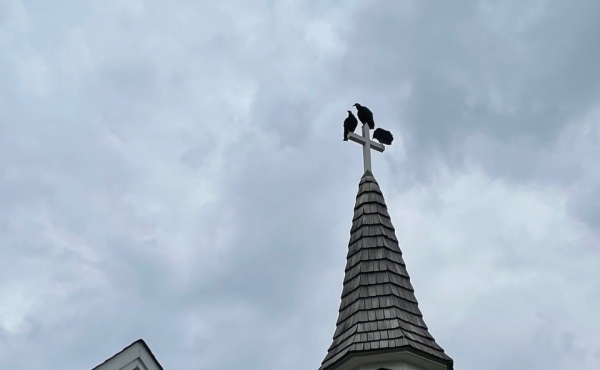 We do not know the history of the shack. It was already well worn in 2011, when the Church of the Advocate became the stewards of the site on which it stands. It has a doorstep and windows, so it is not a shed. It was likely inhabited by a humans along the way, probably sharecroppers, back when the church site was part of a farm. The steps are cement and the nails are made by machine and not by human hands. So it likely does not date to before the 20[1] century.

I don’t know when we started to notice the vultures. First there was one, then, on occasion, two. It was in 2017, when the Godly Play kids went exploring with their teacher that we started making the connection between the shack and the vultures. As the kids got close to the shack, they heard the vulture rustling about inside, then out she flew, catalyzing cries of fright and delight. The shack had clearly become the vulture’s den. 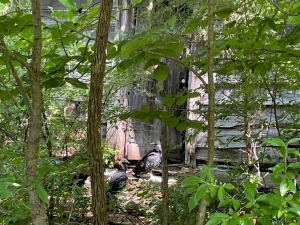 It’s exciting to see the big birds fly to a branch high in the sweet gum by the pond, then swoop over the water and up to the cross atop the bell tower. The site of a one or two up there never fails to bring either a smile or a gasp to every witness.

In COVIDtide, the population of vultures seemed to increase a bit. And the shack that serves as their den developed quite a stench. Moreover, the nails that have held the wood together for so long become even more rusted and exposed, and dangerous. The structure is no longer safe or healthy for us humans.

Along came a volunteer, sent by God, perhaps. A hearty soul who says he likes a project. He offered to do the deconstruction for the cost of renting the dumpster, and maybe also to salvage some of the wood for his art. It seemed like a win. The vestry gave the go ahead. But it just didn’t feel right. I knew it was the safe thing to do. Still, I felt sad for the kids, sad for the vultures, sad for us all.

Then it dawned on me like the Spirit’s breath: we could gather at the den on Sunday after church and offer prayers of farewell. A liturgy! My heart turned.

We shared stories of the dramatic birds, and we read Psalm 104:
You send the springs into the valleys;
they flow between the mountains.
All the beasts of the field drink their fill from them,
and the wild asses quench their thirst.
Beside them the birds of the air make their nests
and sing among the branches.

We offered a prayer:
Blessed are you Lord God of all creation,
you have given us the site to steward and to tend.
Within it you have placed trees and plants of many kinds,
a dwelling or two, and recently, a chapel.

We know this land holds many stories,
and that your creatures have enjoyed is bounty for a long, long time.
We know that the structure we stand by today
was shelter for someone who labored here,
We pray that the one who rested here now knows eternal rest.

Restoring and Transforming God,
you have also called us together as a community,
a community to care for one another and to welcome all you bring our way,
humans, animals, reptiles, fish, bugs.
and birds,
even, perhaps especially, the vultures.

Yet,
yet we know your vultures are not the cleanest of animals.
We appreciate the way they eat at carcasses of road kill,
but it’s kind of gross.
And, like all of your creatures,
they poop.
And when that poop piles up in one space,
it just isn’t safe for us frail humans anymore.

So we pray thanksgiving today for the vultures,
for the role they play in the cycle of life and death in the animal world,
for the role they play in our lives here at the Advocate,
reminding us by their presence,
that we share your creation with them and with so many others.
We offer thanks for the shack, the vultures den,
for the purpose it has served til now.
We pray that you would keep safe those who will work to dismantle it in the days ahead.
And we pray that you would guide the vultures to their next home.

In the name of Jesus,
who knows very well
your love for the birds of the air and the humans of earth.
Amen.

We took turns holding our noses and peaking inside the den one last time.

In this next phase of COVIDtide, we are all being invited to experience the church in new ways. We are being given an opportunity to liturgize afresh our farewells, our welcomes, our practices. We are even, perhaps, being called to be alert to the possibilities. We may not all have new critters dwelling where they are unsafe or inconvenient, but maybe we can bless the cameras and the technology that allow those who cannot meet in person to be included among the congregation gathered. Perhaps we will discover safer ways to take up the offering, not passing a plate, but with everyone processing to a basket near the altar, making an offering of themselves as well as of their funds. Maybe we can develop call and response prayers, between those worshipping in person and those worshipping at home, or recite the psalms, responsively by verses, back and forth. Let us liturgically name those who have moved away or died since we last worshipped in person, maybe welcome the kids with a fanfare the first day they can safely come to church without a mask.

Bringing these COVIDtide-prompted disruptions and developments into a liturgical context makes them a part of our on-going formation, makes them into something holy. As liturgy, they become an expression of who we are and form who we become, the Body of Christ.

Certainly, those of us who gathered by the vulture’s den that Sunday afternoon felt better for having been there, made sense of the sadness we were experiencing. We also realized ourselves as a part of God’s creation, God’s creatures. We became more deeply connected to the church, too. One woman observed, “I know that a church that includes vultures in its life will also include me.”