Suddenly Single: Cooking for One 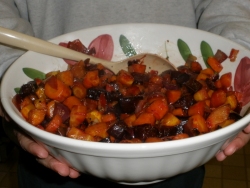 A warden heard it on CBC radio, how a northern community took the needs of the bereaved seriously. Men seemed to suffer nutritionally when a spouse dies. “We are of a certain age, “said Douglas. “where we would barbeque but mostly we had a spouse who did the cooking.”

Fast food, not enough fruits and vegetables, lack of food safety skills, and the energy drain of grief all make it hard for those who are older, now suddenly single. Classes where they can come together, learn and share, eat in community and take home the leftovers have been a huge success. Sociologists have told us that this age group cannot always manage social media technology and may suffer from the ‘bowling alone’ realities of contemporary culture – fewer men’s clubs that were popular destinations post World War II. We wanted to break that isolation since churches are usually pretty good at building community and because we often gather for meals. We called our program “Mike’s Kitchen” and we keep religious chat at a minimum. (The parish is called St. Michael and All Angels, but we didn’t want anyone to self select out of going into a church and we don’t think we are out to evangelize in a formal sense of the word. We are just seeking to serve where we can in ways that might encourage others.)

Our parish has new stoves, a new refrigerator and dishes that are mainly used on Sunday mornings or for the occasional open table or potluck lunch. Days go by when there are no good smells or even conversation over coffee in the kitchen. Stewardship of our resources, serving the neighbouring community, supporting those in need of new friends - it seemed like a good fit. And it has been true.

We brought together some new partners: a nutritionist retired from teaching at a nearby community college, a staff member of a funeral home that has extensive bereavement services, parishioners who have worked in the food service industry, students involved in hospitality or kitchen management classes and those who just love to cook as well as the warden who first brought us the idea. We are now midpoint in our first set of classes and we were on CBC radio ourselves just this morning!! CBC Radio One, Ottawa Morning program, January, 26, 2012.

The parish provided an initial grant to help us buy aprons with our logo, paid advertising, cooking equipment like good knives, cutting boards, bowls and measuring cups, cooking spoons and vegetable peelers. Recipes are printed for each class, a demonstration given, pairs have all the ingredients needed and their own cooking stations. Three courses are prepared each week depending on the choice of that day’s cook. Participants bring their own take home containers and their own experiences shared over the delicious meal they have just prepared. The level of conversation floats up the stairs as do the smells of roasting chicken or baked apples.

Everyone thinks it is a good idea and we love having a dinner party with interesting new friends every week. We gather at 10:30 am on Thursdays and end with smiles and “don’t forget to bring me that recipe” at 1:30pm. Even in the depths of a Canadian winter, there is warmth and plenty of good cheer.

Christine Mackie’s segment on St. Mike’s Cooking for One classes aired on CBC Radio this past Thursday. You can listen online at the Ottawa Morning past episodes page. Scroll down to “Cooking for One.” [Editor's note: this segment aired in January 2012.]  Last week, reporter Kristy Wallace wrote an article on Cooking for One for EMC Ottawa West. You can read Kristy’s piece at EMC’s Web site.