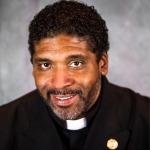 William J. Barber, II is a pastor and social justice advocate building a broad-based grassroots movement, grounded in the moral tenets of faith-based communities and the constitution, to confront systemic racism, poverty, environmental devastation, the war economy and the distorted moral narrative of religious nationalism in America today. As pastor of Greenleaf Christian Church in Goldsboro, North Carolina (since 1993) and president of the North Carolina conference of the NAACP (2005–2017), Barber approaches social justice through the lens of the ethical and moral treatment of people as laid out in the Christian Bible, the Reconstruction and civil rights movements of the South, and the United States Constitution.