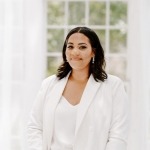 Maria Teresa Bautista-Berrios is currently a Seminarian at Virginia Theological Seminary working towards her master’s in divinity in her journey towards ordained ministry. Before her move to the East Coast, Maria Teresa was a Missioner/Church Planter at Episcopal Church in Northshore, with the focus of developing an Episcopal presence between Hwy 610 and 8 in the East Harris Convocation of the Diocese of Texas. Previously Maria Teresa was the Missioner Associate for Houston Canterbury, an Episcopal Campus Ministry at Texas Southern University, University of Houston, San Jacinto and Houston Community College. Maria Teresa graduated from the University of Houston-Downtown with a B.S. in Psychology in 2018.

Prior to work in the Diocese, Maria Teresa was working as a Community Organizer with The Metropolitan Organization (TMO), as well as the Youth Group Coordinator for Epiphany Episcopal Church. Maria Teresa was previously the Chair for the Commission on Black Ministry.

Maria Teresa grew up within the Episcopal Diocese of Washington D.C. and moved to Houston in 2014, along with her parents, The Rev. Simon and Amarilis Bautista and her siblings Tito, Leaquina and Lily. With two parents from the Dominican Republic, Maria is bilingual in both Spanish and English. She is currently enjoying newlywed life with her husband Fabian and their puppies Noelani and Milo.