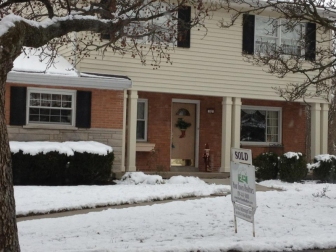 We received the keys to our new house last night.

The kids ran from room to empty room, claiming their space and plotting design elements. We brought the champagne to pop open after the old owners left.

But a funny thing happened. Like most moves, it took longer to clean out the last bit of stuff than they anticipated. The previous owners were still loading and sweeping, and by this time, forgoing boxes and instead, throwing their belongings in trash bags to sort out later.


They walked us through the house and pointed out its peculiarities: the key on a nail beside the basement door, a lifesaver when playful children pushed in the doorknob lock. The faint outline of a shuffleboard triangle in the long garage, a remnant from the days their children were young and needed something to do in the cold winters.

They were exhausted but a little reluctant to leave. This had been their home for 38 years. Their whole married life. Where they marked their children’s progress on a growth chart behind the bedroom door. Where they gathered for family dinners and washed countless loads of laundry and the kids swung on the grapevines in the woods near the creek.

As I walked down the stairs, I noticed the worn grain on the banister, and I thought how many times her children had run their hands down the wood.

When they loaded the last bag, the couple turned to us.

Her shoulders relaxed, and her eyes grew misty.

“Thank you,” she said. And she hugged me goodbye.

Change is hard for most of us, especially when it means leaving behind something that we love. But it’s a little easier, perhaps, when the person doing the change promises to take good care.
We’re going to paint and strip wallpaper and replace the carpet. But the bones, the structure of the house, will remain.

I wonder if this reassurance might help when we’re struggling with change in our congregations. Sometimes people have spent their whole married lives there. Raised their children. Marked their growth through baptism and confirmation. They remember the countless potlucks and spring clean-ups, funerals for old friends and weddings of their children.

Maybe, as we’re moving through change, we need to offer a few simple, genuine words.