Jesus Was Right There, in the Bounce House 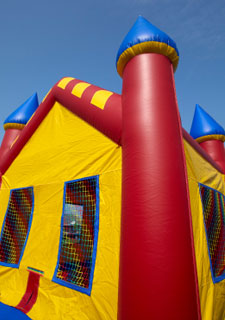 Until last week, I'd never been involved in a worshipping community's celebration of the completion of its first year; Southside Abbey's one year anniversary changed that.

Think about all that takes place throughout the church year. Ordinary Time becomes the watchfulness of Advent. Incarnation is realized in Epiphany. Lenten fasts are broken by Easter joy. The Great Fifty Days culminate in the gift of the Holy Spirit at Pentecost, until once again, time becomes ordinary.

While every parish shares in this rich rhythm, it is different with a new worshiping community. Everything is new. There is no, “we've always done it that way.” At Epiphany, no one thought it odd that we went door-to-door sharing “Episcopal Epiphany Pickles” . . . three hundred pounds of pickles. By Lent, no one batted an eye when soup-making consumed every Sunday . . . so that we could share 400 cups with our neighborhood.

Our 21st Century interpretation of caring for the feet of the poor became 240 brand new shoes (and the socks to go with them) delivered to the local elementary school . . . no front-page scoop followed. The Pentecost “Tongues of Fire Chili Cook-Off” fed a multitude with close to forty gallons of homemade liquid heat . . . and by now, people were starting to catch on.

Now, as we look forward to another year, we are also able to tell the story of over 2,000 meals served as a part of worship. It has been a great year. This is what happens when Jesus shows up.

We wanted to celebrate the completion of a year well-lived with a party in true Southside Abbey style. So we decided to worship in the parking lot of a local motel that houses many of the working poor in our neighborhood. We had a grill with hot dogs and veggie burgers, a makeshift altar (complete with flowers picked from a nearby front yard and a piece of barbed-wire found in the parking lot), and a race-car-shaped bounce-house. Nearly 150 people were in attendance for the celebration.

As the celebration was winding down, I noticed a young girl leaving the bounce-house with some determination. I realized that she was headed straight for me. She made her way through the crowd, marched up to me, and hugged me. Her dirt-smudged cheeks had the random tinge of orange frosting. Her hair was matted from little-kid bounce-house sweat. Her clothes were brightly-colored with rainbows and unicorns dancing across the shoulders. This was the most uncomfortable hug of my life . . .

Then, just as soon as she had found me, she pushed her way back through the crowd. I lost her. I still do not know where this child came from, but I know who she really is. I like to think that she was Jesus – right there in the bounce-house – hugging me for what Southside Abbey stepped out in faith to do.

Thank you Southside Abbey for a wonderful year and thank you Jesus for all the hugs.