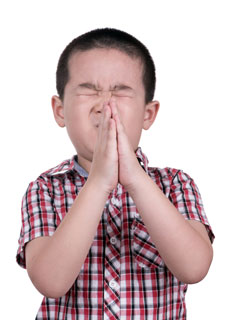 The answer came to me a decade ago. I was sitting in a circle of very young Episcopalians, listening to them explore a dark patch of felt in the parable of the Good Shepherd. They were so interested in the “places of danger” on the story-telling fabric. They kept looking at it, some carefully, out of the corners of their eyes. Others boldly facing-it-down, even touching it. They knew what places of danger were. They said so. Not just the dark places under the bed, or around the corner. They talked about being left alone, being left with strangers, being lost, being with adults who were angry. With people who were mean, or did not understand them. And they leaned-in to the part about the Good Shepherd’s role. His role was not to rescue them, or to lead them away from the danger. But to walk with them, through it. Right through it. It would still be dark. And it would still be dangerous. But they would not be alone.

Their wisdom, and their acceptance of a fact that I often avoided eye-contact with, was humbling to say the least. Instructive. Challenging. These four and five year olds understood and embraced a teaching that I took great pains to avoid. I had decided, long before, that when the going got tough, and no one came to rescue me, it was up to me to get through it. Alone.

Many circles later, I came to hold a deep respect for the spiritual lives of children, and long to hand-over to them the language of the church. It is not so I can check off a box, or teach them to be young churchmen and churchwomen. It is because I cannot wait for them to give it back to me. When they give it back to me, through their unbiased, unabashedly differentiated lens, it is liberated. Their prayers are direct; including their pets, their favorite teams, parents, and sick classmates. Their singing is bold in its honesty; belting-out the good parts and refusing to sing the boring ones. They confess to hating their siblings, and fearing school shootings. Their questions about death, about sharing, and about people who are suffering – they want answers.

The 9:00 service at St. Timothy’s places children squarely in the center of this exploration of faith. It hands-over to them the carrying of sacred stuff, the writing of prayers, telling of stories, singing of songs, confessions of sins. They lead, and we follow. We understand that while they might not be our birth children, they are poised to be our re-birth children. Adults who attend do the work to move-away from objectifying them, not constantly grinning at them, or insisting that everything they do is “cute” or even “innocent.” To be clear - our children are the most adorable little Episcopalians you will ever meet - but for these 30 minutes we hope to look deeper, and to let their lives speak to us the holiness of what it means to gather together, and trust that God is with us.

This post was originally published February 19, 2014 on the St. Timothy's Episcopal Church blog and is reprinted with permission.