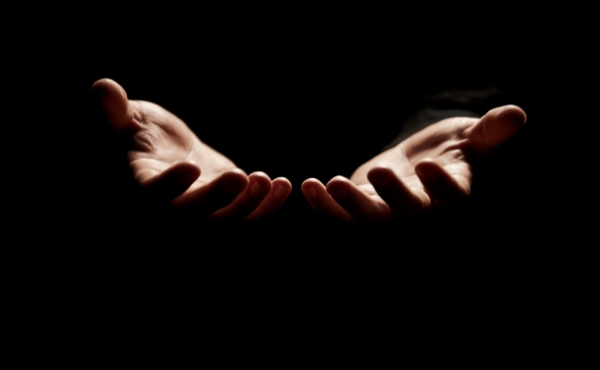 The disciples had been watching their Master immersed in prayer, sitting in silence for long periods of time, and they’d learned not to interrupt. Jesus regularly went off by himself before the first light of day, seeking a deserted place to commune with the Creator. The disciples could feel the power of those times and yearned to experience that for themselves. “Lord,” they asked, “teach us to pray.” (Luke 11:1)

So Jesus gave them some words of prayer: calling on God’s Name, proclaiming the coming of a holy kingdom and their dependence on the Creator, seeking forgiveness “for we forgive everyone,” and asking for help when trials come. This simple version of the Lord’s Prayer (expanded in the Gospel of Matthew) has such an impact that we still say it today. It probably wasn’t new to the disciples—we can all use a reminder—but from their disappointed looks, something more was needed.

So Jesus decided to tell them a story, about a man who’d had a long day of work. Dinner ran late, and the kids were wild. Finally, he got them all settled down for the night, but just as he was drifting off to sleep, someone pounded on the door. “Go away,” he shouted, “it’s late and we’re asleep.” It was a friend, though, who had an unexpected guest and needed to borrow a few loaves of bread. “It’s too late now,” the man said. “Come back in the morning and I’ll give you whatever you want.” But the friend kept pounding, so the man finally got up and gave him some bread.

Praying is not the same as writing a letter to Santa or making a to-do list for God. When we ask, we will receive, but not necessarily what we wanted. When we search, we may not realize what we need. When we knock, we don’t actually know what’s behind the door.

For me, a key to praying is to be persistent, because often I don’t recognize the answer. Many of the best things in my life have been total surprises, not conscious choices. Forty years ago, when I went on a blind date with the woman who’s now my wife, I was thinking about the music we were going to hear, with no clue that my life would be turned upside down. The same’s been true with vocational changes, which often have turned out in wonderful ways I never imagined. Clearly, the Creator knows me better than I know myself.

So keep asking, searching and knocking, but don’t get attached to the results. Picture Jesus sitting in a deserted place, watching the sky turn light and listening for guidance. That kind of prayer takes patience and persistence, but it’s worth it. An abundance of blessings awaits us, if we’re willing to be guided and don’t mind being surprised.