The Other Way to Renovate 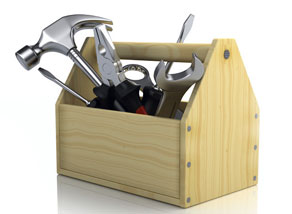 Like every other church, St. George’s deals with deferred maintenance on our buildings and grounds. We try to keep up with as many projects as we can, but our forebears gave us a lot of stuff and, today, the funds and the personnel are limited. But even more limited than the money or the volunteer core has been the vision to do something and the will to carry it out.

For the life of me, I could never figure out why we couldn’t get a properly organized Buildings & Grounds Committee at St. George’s, despite the fact that there are lots of handy and capable crafts-people in this congregation and community. In part, that was the problem: the do-ers wouldn’t come to the table because they just wanted to get a project done, and the planners would slow down the process and frustrate the former group.

Over the course of this past year, that heavy dysfunction has begun to change. It changed when one person came on board, gifted with a calm, straightforward, clear, and balanced leadership capacity. She has convened meetings and made the meetings – not to mention the agenda and overall process – quite clear and transparent. She has massaged egos and calmed nerves and clarified points of disagreement. She has her own thoughts about what should happen and what something should look like, but she leads with her experience and gifts as a group facilitator.

Through it all, a committee has formed, turning themselves into a small group of like-minded Christians with a heart for this work and a love for this place. They laugh and tell stories and genuinely seem to enjoy one another’s company. They also make space for newcomers, as happens more and more often nowadays. And they are pretty good at overseeing the vision and executing the work, their work, in this case, being the creation of a list of priority projects and soliciting bids and determining who gets selected. If you ask them where and how they experience God in Christ, they would probably point to their love of coming to this historic church and churchyard and working for a few hours, the ways they feel they are performing a service, and joining in a long line of faithful disciples who preceded them. They would also probably point to the fondness they have for their fellow Christians, and most notably those men and women they have come to know more deeply through membership on a Buildings & Grounds Committee.

As a result of their careful and, yes, holy work, we were able to send out a midyear capital improvement solicitation letter, something we’ve done in years past and which I’ve long wanted to make an annual tradition. I’ve thought that if you send out a clear, midyear, one-time solicitation letter after Easter, and tell the people that you won’t ‘nickel-and-dime’ them and that this will be the one and only solicitation letter they see all year, except for the annual campaign, and if you plan to send out a thank you letter and have the whole campaign wrapped up by late summer, folks might be very generous. (It’s just that people don’t like getting hit up for money left and right, and people like to receive a clear follow-up thank you, informing them of the success of the campaign and also that it’s also over.)

Indeed, St. George’s folks were very generous. Not only did they contribute because the letter was clear and was targeting specific capital improvement projects but also, I believe, they dug deep and offered much because the projects themselves, came from the community, and emerged from a healthy committee process. The members of this newly formed Buildings & Grounds Committee infected this whole congregation with an attitude of possibility and joy and new horizons, and they clearly told stories about how much they enjoy their time together and their pride in getting things done.

The other way to renovate, then, is to not focus on those shabby shingles or peeling paint. At least, don’t start there. Start with your people, with their experiences and hopes and genuine need for relationship and connection and community and friendship. Start there, where God in Christ obviously started, and the work will get done. Indeed, the work will get done gloriously.